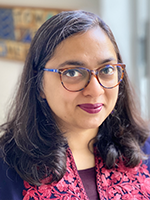 Meghna is a lawyer and has worked intensively on human rights issues. She is an accomplished researcher, author, trainer, and advocate.  Over the past two decades Meghna has held a range of management posts in non-governmental organizations, and supervised teams of lawyers, policy advisers, researchers, campaigners and advocates. Her work has spanned all regions of the world.

Meghna worked at Amnesty International from 2007 to 2019 in a variety of roles, including the Director of Global Thematic Issues, Deputy Director for Economic, Social and Cultural Rights, and Senior Researcher on Corporate Crimes. She has led major research projects on the human rights and environmental impacts of natural resource extraction and foreign investment in Myanmar and Indonesia amongst others. She has also led and supervised work that examined the role of China as a foreign investor. Prior to joining Amnesty International, Meghna worked for international human rights NGOs and academic centres in India and Switzerland.