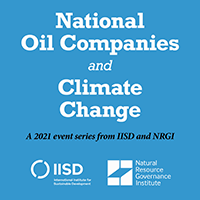 Topics
State-owned enterprisesEnergy transitionEconomic diversification
Social Sharing
National oil companies (NOCs) wield a major influence over the fight against climate change: they produce more than half of the world’s oil and gas and are projected to spend almost $2 trillion on upstream projects over the next decade. NRGI and the International Institute for Sustainable Development (IISD) organized a webinar series to discuss the challenges and opportunities facing NOCs, brainstorm ideas to increase the climate sustainability of their practices and share strategies on how climate advocates and NOCs can communicate more effectively with one another. The series has drawn experts from within governments and NOCs, the research and advocacy communities.

In November 2021, the two organizations published guidance for climate advocates based on the event series.

In the follow-up of each event in the National Oil Companies and Climate Change series, NRGI and IISD published a blog post highlighting key lessons from the event.