Expanding the EITI Agenda to Transportation of Hydrocarbon Resources 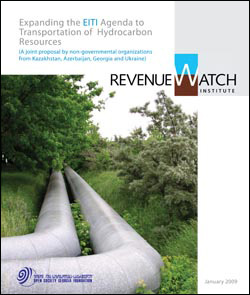 Download
Expanding the EITI Agenda to Transportation of Hydrocarbon Resources (PDF 595.99 KB)
Topics
Global initiatives, Mandatory payment disclosure
Countries
Azerbaijan, Kazakhstan, Ukraine
Stakeholders
Civil society actors
Precepts
P12 What are Natural Resource Charter precepts?
Social Sharing
The transport of oil and gas across great distances and international borders is a link in the chain of revenue transparency that is often overlooked. Hidden from scrutiny, the management of transit revenue and technology offers insidious opportunities to use energy as a weapon of political and economic influence. The latest natural gas payment dispute between Russia and Ukraine, and the resulting disruptions in Eastern Europe's gas supply during January, were a vivid reminder of the need for transparency in energy trade and transit.

Revenue Watch partners from Azerbaijan, Georgia, Kazakhstan and the Ukraine have collaborated in a policy brief that advocated for the expansion of the Extractive Industries Transparency Initiative (EITI) to include hydrocarbon transit and transportation.

The authors argue that transparency in transit revenues is a logical next step for the EITI and similar programs because, among other things, the countries who host transit infrastructure are increasingly dependent on the associated revenue to finance state budgets. Transit revenue is dependent on production, as effective transportation relies on maintaining an adequate volume to keep the oil and gas flowing. Because the hydrocarbon transportation life cycle is volatile, a decline in reserves could effectively end transport and set off a sharp loss or reduction of government income.

Initiatives like the EITI provide a model for improved regulation in producing countries, and a tool enabling governments and citizens to monitor extractive industry revenues. This report offers a rationale for the expansion of the EITI to include transit and transportation disclosures, and emphasizes the important socio-economic impacts of the transit sector on its host countries. The document includes a supplemental overview describing the specific features of hydrocarbon transportation in the countries covered.