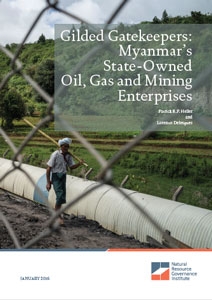 As Myanmar seeks to build more modern and open oil, gas and mining industries, the state-owned economic enterprises (SEEs) active in these sectors will play a critical role. Enhancing the effectiveness of these SEEs will be an important goal of Myanmar’s continued economic reform as the country embarks upon its post-election transition. Such reforms will evolve in a context of a broader debate about the role of extractive industries within Myanmar’s economy, growing efforts to promote transparency, and ongoing concerns about the links between extraction and conflict.

Within this complex context, the Natural Resource Governance Institute (NRGI) has conducted research into the activities, revenue flows and governance of Myanmar’s extractive-industry SEEs. The aim of this research is to help governmental and non-governmental stakeholders within Myanmar assess key challenges surrounding the country’s oil, gas and mining SEEs. It builds on preliminary information-gathering within Myanmar and NRGI’s global research on the governance of state-owned enterprises. Our research highlights several findings that warrant consideration by Myanmar’s leaders as they examine how SEEs can contribute to the country’s reform agenda:

We suggest that stakeholders consider the following broad goals to enhance the positive roles played by Myanmar’s oil, gas and mining SEEs: