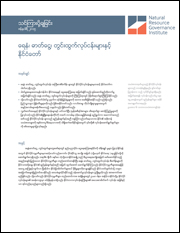 In some countries, such as Brazil, Chile, and Norway, effective state-owned companies have developed strong commercial capabilities and helped manage oil, gas and mining projects according to the goals of the country and the interest of citizens. As these companies gain experience, they can reduce dependence on foreign partners, deliver sizable returns to the national budget, and fuel the development of locally owned service providers. In other cases, particularly in the early years of their existence, state-owned enterprises (SOEs) in countries such as Ghana and Angola have played a more limited role, often as minority partners to multinational enterprises.

However, state participation also carries serious risks. If not effectively staffed or supervised, state-owned companies can slow project development, decrease the revenue accruing to the state, and accommodate corruption. In many countries these enterprises have served as vehicles used by public officials to steer valuable contracts toward their own interests or to create bloated bureaucracies that do little to advance the country’s broader economic development goals. State equity investment can also bring risks by exposing the country to a share of project costs, and by increasing dependence on non-renewable natural resources as a core economic driver. Parliaments can play a critical role in designing and ensuring the application of rules that define the roles of state-owned enterprises, mandating good corporate governance and transparency and creating incentives for strong and effective management. National companies and the administrators of local content programs should be subjected to regular reporting and vigorous oversight by parliaments.

How Can Myanmar Avoid the Resource Curse?