This article was originally featured as an op-ed in the Myanmar Times on 10 June 2016.

Who profits from the oil, gas and mining industries? And how do citizens benefit from resource extraction? Myanmar has made significant progress toward addressing these questions since joining the Extractive Industries Transparency Initiative (EITI), a global effort to make information from the natural resource sector publicly available. (For more information, see NRGI’s guide on the EITI Standard.) The initiative is anchored in the belief that more complete information can promote accountable management of countries’ natural resources.

The information has shed light on Myanmar’s historically opaque extractive sector and helped to build a case for further transparency in areas where knowledge remains lacking. But even the most intrepid reader will balk at the prospect of wading through a 144-page technical report and its annexes. With such a flood of data, most Myanmar citizens cannot utilize these findings or understand their stake in the disclosure process. 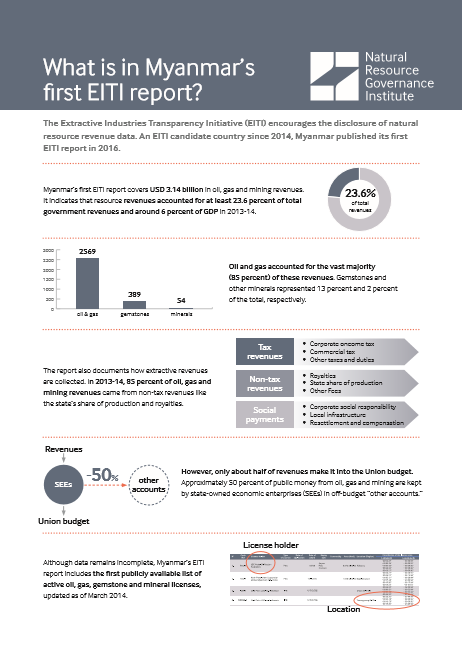 In brief, here’s what the average person needs to know: 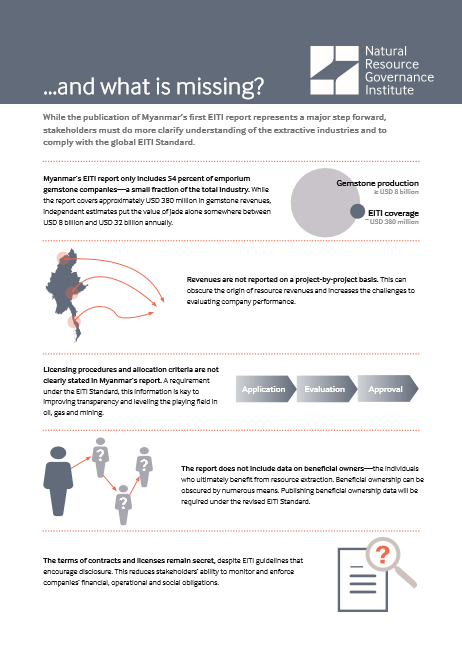 Although areas for improvement remain, Myanmar’s first EITI report allows stakeholders unprecedented insight into the natural resource sector. EITI data can support advocacy for reformed and responsible governance of oil, gas and mining – such as improved accountability for state-owned economic enterprise revenues, greater oversight of the gemstone sector, or stronger rules regarding disclosure of contracts and beneficial owners. While working to address remaining knowledge gaps in its next EITI report, Myanmar’s new government should also focus on putting this powerful information into the hands of stakeholders and citizens.

Paul Shortell is a visiting fellow with the Natural Resource Governance Institute (NRGI) in Yangon.