The Ministry of Industry, Energy, Mines and Renewable Energies collaborated with the Natural Resource Governance Institute (NRGI) and the Columbia Center on Sustainable Investment (CCSI) to implement a ResourceContracts site, responding to civil society demand. Launched in October 2016, it provides an open data platform for disclosed extractive contracts.

The recent disclosure of contracts will enable accountability only if oversight actors can understand the available information and use, analyze and compare it.

NRGI will continue to build tools for local use. A planned March 2017 workshop for media and civil society will bolster stakeholder ability to efficiently monitor available extractive industries data and strengthen their advocacy strategies as oversight actors. A tool for parsing disclosed contracts

The 129 hydrocarbon investment contracts and associated documents published on the site initially lacked summaries of key contract terms. In December 2016, CCSI trained two Tunisian legal experts on the annotation process. The contracts for annotation were selected using the criteria of relevance (e.g., the project is presently operational); presence in public debate; and addition to diversity of contract forms (e.g., concessions, profit sharing contracts, joint venture contracts). By the end of January 2017, the two experts had annotated 63 hydrocarbon contracts. 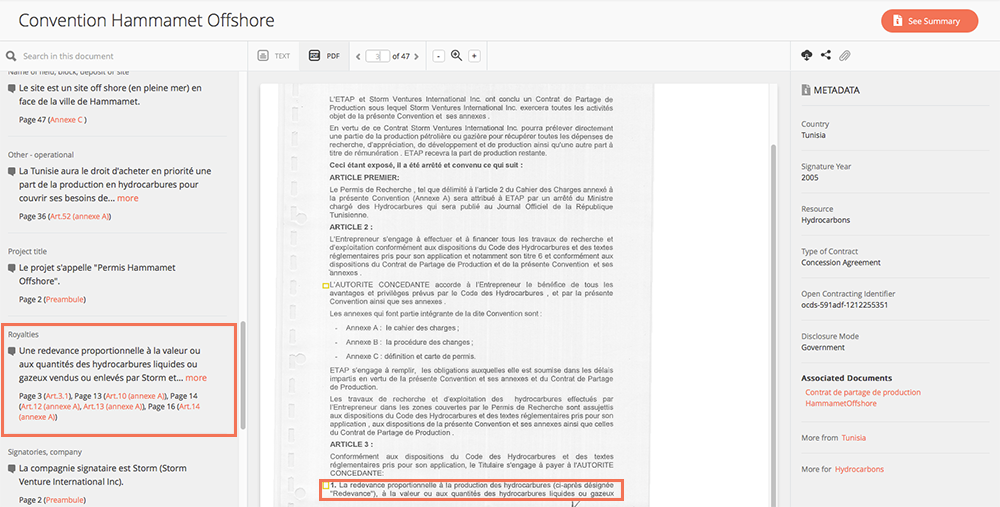 The clipping function allows users to compare annotations between companies or countries—a new ResourceContracts feature. This feature will put officials in the Tunisian government on a more equal footing with companies, providing them with more information on existing contracts, thereby informing future contract negotiations.

A royalty provision comparison between contracts in Tunisia and Libya (Click to enlarge.)

In January 2017, the government also published 40 mining contracts on the country site. Notably, these mining contracts contain the work program that investors commit to follow during the exploration phase. This publication is crucial: it allows for comparison between signed mining contracts and the model mining contract. It also enables oversight actors—namely CSOs, parliamentarians and the media—to monitor the fulfillment of obligations relating to the development program noted in the contract.

The release of the COTUSAL contract, signed in 1949 for the extraction of salt, was a very important step toward transparency and accountability. This contract was signed before Tunisia’s independence; it created considerable debate in 2015 around the fiscal privileges granted to the investor. Some parliamentarians requested a revision of the contract’s fiscal clauses. 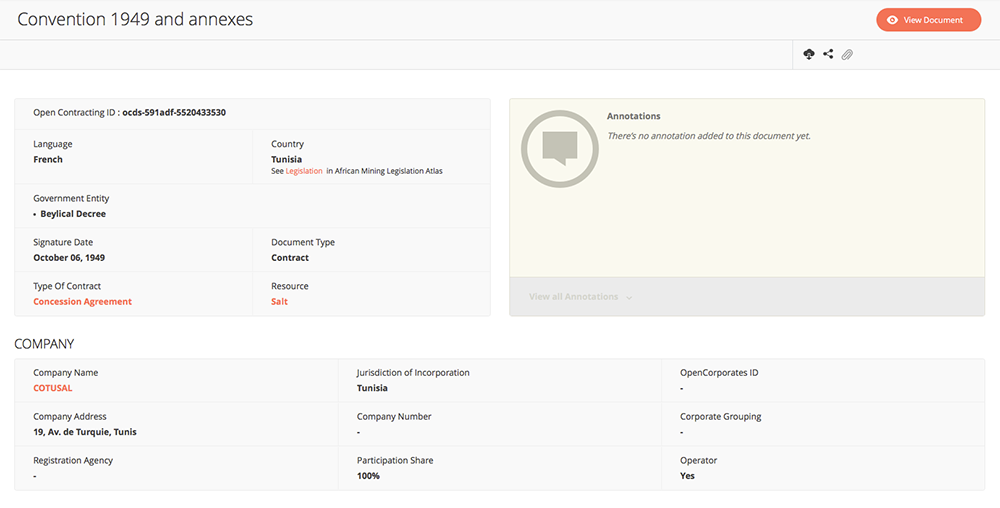 The Ministry of Public Service and Governance is working on accelerating EITI adherence as ministry officials lead the OGP process. The ministry has requested NRGI’s assistance to meet its pledge to join EITI by July 2018. NRGI experts are eager to facilitate discussion around this commitment: dialogue is at the heart of the EITI Standard.

Extractive industries management has substantively changed in Tunisia. The sector is moving from the most controversial in the Tunisian economy to a driver of reform. The creation of the open data portal was a source of pride to the government during the execution of the previous OGP national action plan, and now the ResourceContracts Tunisia country site is another important step toward open data enhancement in Tunisia.

The ResourceContracts platform is an online repository of oil, gas and mining contracts developed in partnership between the World Bank, NRGI and CCSI. The site enables civil society organizations, members of affected communities, government officials, researchers and other stakeholders to search for contracts; view summaries of contracts’ key environmental, social, operational and fiscal provisions; and download full contracts as open data. The site was relaunched in 2015 with new features and contracts.

The partners behind ResourceContracts continue to work with governments and country level EITI offices to publish extractives contracts as open data. Tunisia is the fourth country to establish a ResourceContracts country site, following Guinea (2013), the Philippines (2015) and Sierra Leone (2016).