This piece was originally published as an op-ed in The Myanmar Times. Read it in Myanmar language here.

Myanmar's gemstone sector is opaque and unaccountable. In 2017, the country scored just 27 of a possible 100 points and ranked 83rd among 89 assessments in the Resource Governance Index. However, new data are helping observers to unpack this sector and inform eventual reform.

In March 2018, the Extractive Industries Transparency Initiative’s (EITI) Myanmar office published its second report covering financial years 2014-16. EITI is an international movement that has played a key role in promoting transparency and accountability in Myanmar’s extractive sectors by fostering multi-stakeholder dialogue while providing a framework to disclose and reconcile data. Accompanying the report are detailed government and private sector data for various industries: jade and other coloured gemstones, minerals, oil and gas as well as forestry. 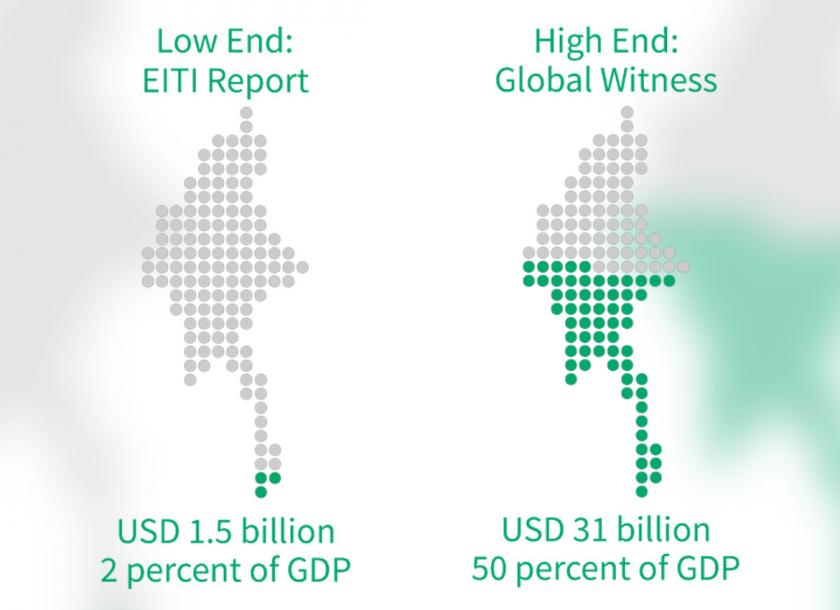 The disclosed data on jade include company profiles, legal ownership information, lists of licences, production and export amounts, tax payments and revenue flows to various government agencies, and social spending. These EITI reports underscore the gradual improvement in transparency of Myanmar’s extractives industries, while highlighting the gaps in the country’s natural resource management.

Digesting the huge amount of data released, however, is no easy task. The information is spread across various documents and in different formats. This poses a challenge for extractive sector observers to analyse, and makes it even more daunting for the general public to understand. The Natural Resource Governance Institute (NRGI) launched a public data portal on the jade industry in May, in part to address these challenges.

The aim of “Open Data: Myanmar Jade” is to unpack the new EITI data and, in combination with available data from other sources such as the government, to present rigorous and impartial information. It has three main features: clean, collated data sets; a data visualisation tool; and original, narrative “data stories.” Each feature was developed with input from users in Myanmar and for audiences with different data skills, from researchers to the general public. The first data story re-examines the possible size of the jade industry, which had been estimated for 2014 between USD 5 billion to USD 31 billion by Global Witness and around USD 15 billion by the Harvard Ash Center - Proximity Designs. This contrasted to the official government estimate of USD 1.5 billion.

The portal is also intended to support ongoing government and civil society efforts to increase transparency of the jade sector. Domestic and international attention, for the past few years, has been trained on jade, a resource characterised by illegal trade and a huge amount of uncollected state revenues; links to domestic conflicts and the peace process; and environmental and social disasters, such as unregulated, mass migration of workers with no safety regulations.

Addressing the jade sector’s challenges is an urgent need. It is also highly difficult. At the same time, it is an opportunity for the National League for Democracy-led government to signal a new era of accountability.

The publication of the second EITI report and the release of new data was obviously a welcome step. It also complements a multi-stakeholder committee officially established by the Ministry of Natural Resource and Environmental Conservation in December 2016. This committee is mandated to provide input on sector reform in response to community mobilisation in jade-producing Kachin State and international offers to support it, and has been supervising the drafting of a national sector strategy.

Since the launch of Open Data: Myanmar Jade, the Myanmar EITI has replicated the jade portal on its website and has been working on similar tools for some of the other sectors covered by the initiative — namely oil, gas and minerals.

Other organisations might also be interested in exploring the possibility of doing the same for the forestry sector based on the newly available EITI data.

We are encouraged to see that data-driven analysis is starting to take root in Myanmar, and we hope this will be used to inform future reforms in extractives sectors governance. The disclosure of data is only the first step in increasing these industries’ transparency. Making the data relevant for key stakeholders, including Myanmar’s citizens who ultimately own the resource wealth, is the necessary follow-up step. However, the end goal is that new information and analysis are used by the government and the lawmakers to take decisions to improve the management of the jade sector, bringing more revenues to the state and more benefits to citizens.

Aye Kyithar Swe is a senior officer with the Natural Resource Governance Institute (NRGI) in Myanmar and Matthieu Salomon is a former Asia Pacific and Myanmar manager with NRGI. Open Data: Myanmar Jade is accessible at www.OpenJadeData.org. All the source code and the data used for the portal is made available under an open source license—the content is freely accessible to anyone and its distribution and modification does not need permission from NRGI.