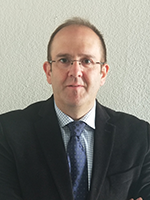 Luis joined NRGI in April 2020 after three years as chief financial officer at Water For People.

He started his extensive career in finance as a treasurer and accountant for two regional associations in Spain. After working as a financial advisor at Bilbao Vizcaya Bank, Luis transitioned to the non-for-profit sector.

He dedicated more than 20 years of his career to serving those who suffer hunger or lack access to clean water in three international sections at Action Against Hunger, as well as the charity Water For People.

Luis began his Action Against Hunger career as the financial and administrative director in Haiti, from 1997 to 1999. He then led financial oversight of all Madrid-managed missions worldwide as the field operation finances director, a position he held until the end of 2005.

Luis is a native of Bilbao, Spain. He earned degrees in economics from universities in Bilbao and Lille. He has also taken Ph.D. courses in international economy and development from the Basque Country University in Spain. He speaks five languages fluently.