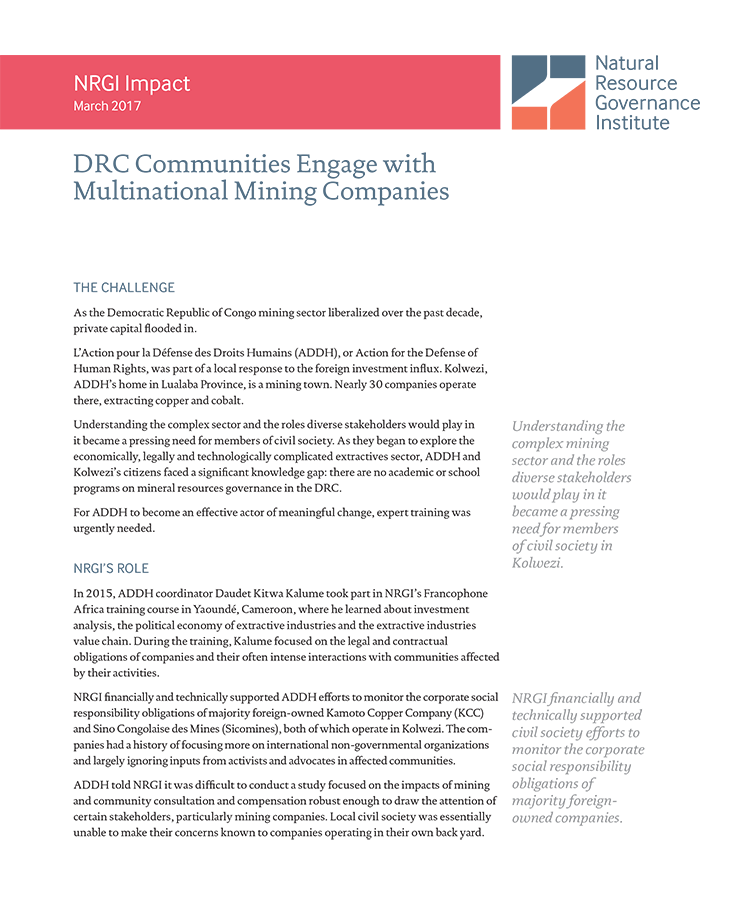 As the Democratic Republic of Congo mining sector liberalized over the past decade, private capital flooded in.

L’Action pour la Défense des Droits Humains (ADDH), or Action for the Defense of Human Rights, was part of a local response to the foreign investment in influx. Kolwezi, ADDH’s home in Lualaba Province, is a mining town. Nearly 30 companies operate there, extracting copper and cobalt.

Understanding the complex sector and the roles diverse stakeholders would play in it became a pressing need for members of civil society. As they began to explore the economically, legally and technologically complicated extractives sector, ADDH and Kolwezi’s citizens faced a significant knowledge gap: there are no academic or school programs on mineral resources governance in the DRC.

For ADDH to become an effective actor of meaningful change, expert training was urgently needed.

In 2015, ADDH coordinator Daudet Kitwa Kalume took part in NRGI’s Francophone Africa training course in Yaoundé, Cameroon, where he learned about investment analysis, the political economy of extractive industries and the extractive industries value chain. During the training, Kalume focused on the legal and contractual obligations of companies and their often intense interactions with communities affected by their activities.

NRGI financially and technically supported ADDH efforts to monitor the corporate social responsibility obligations of majority foreign-owned Kamoto Copper Company (KCC) and Sino Congolaise des Mines (Sicomines), both of which operate in Kolwezi. The companies had a history of focusing more on international non-governmental organizations and largely ignoring inputs from activists and advocates in affected communities.

ADDH told NRGI it was difficult to conduct a study focused on the impacts of mining and community consultation and compensation robust enough to draw the attention of certain stakeholders, particularly mining companies. Local civil society was essentially unable to make their concerns known to companies operating in their own back yard.

With NRGI help, Kalume and his colleagues released a report evaluating the extractives-related benefits the community saw.

A focus meeting with members of communities surrounding the Sicomines project and impacted by it.

KCC’s board chairman, legal advisor and community development department manager welcomed ADDH to discuss the report. This was significant: the company had previously brushed off meetings with the civil society organization.

KCC and Sicomines directors sent ADDH responses to the report’s recommendations, surprising the group’s members. For the first time, ADDH was seen as a peer group worth hearing out—a legitimate interlocutor for the community impacted by mining.

Two days after ADDH visited KCC, a Luilu community delegation impacted by KCC’s project visited the miner’s offices. During that meeting, in an abrupt shift from previous experience, KCC expressed interest in the needs of the communities impacted by its project. The move was apparently prompted by the earlier KCC and ADDH meeting. 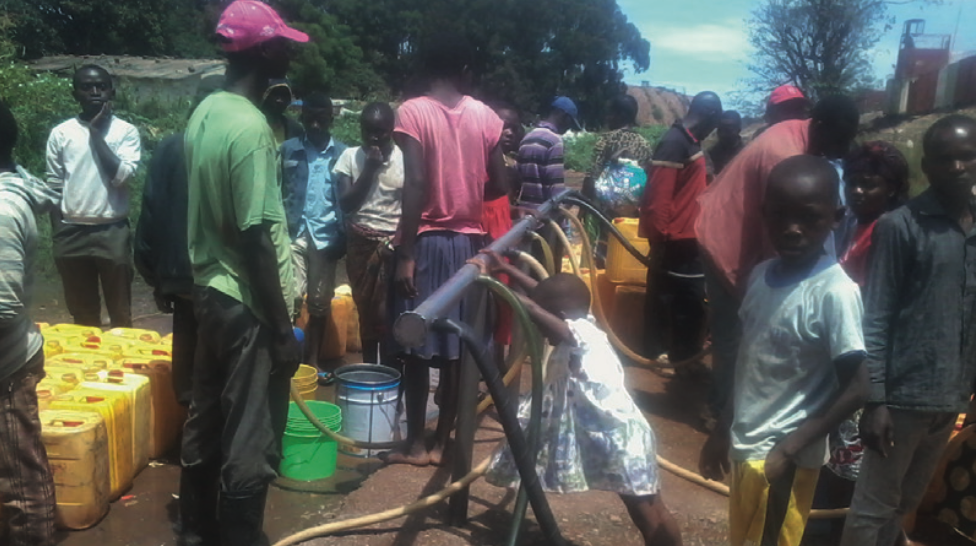 This well supplies the communities surrounding the Sicomines project.

A community consultation also resulted in KCC promising to finalize an uncompleted well project supporting the Luilu and Tshamundenda communities, with populations of 24,300 and 16,700, respectively. Lobbying also resulted in Sicomines building a multi-purpose road in a community impacted by its project.

Sicomines and KCC now have a different perception of local NGOs’ competencies. ADDH presented its report to key decision-makers in Kinshasa and presented report recommendations to national authorities, advocating for better monitoring of companies’ local commitments. The organization passed along what it learned in a data validation workshop with local authorities, NGOs, community leaders and journalists.

NRGI is helping the citizens most impacted by mining make their voices heard to elected representatives and companies operating with their consent. And through its training and outreach, NRGI is promoting the important work of organizations like ADDH.

How One DRC Community Engaged with Multinational Miners