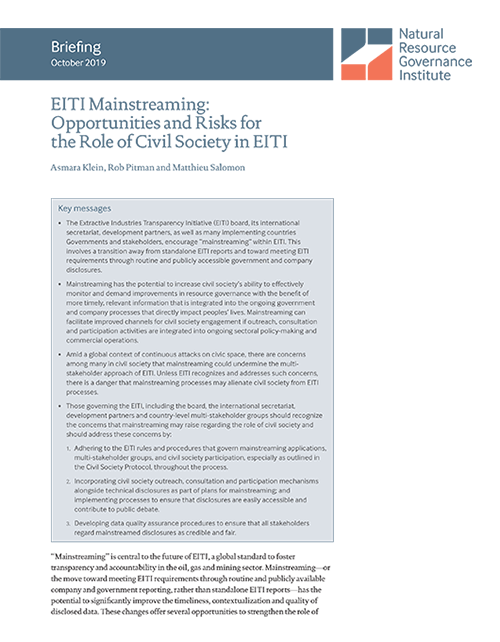 “Mainstreaming” is central to the future of EITI, a global standard to foster transparency and accountability in the oil, gas and mining sector. Mainstreaming—or the move toward meeting EITI requirements through routine and publicly available company and government reporting, rather than standalone EITI reports—has the potential to significantly improve the timeliness, contextualization and quality of disclosed data. These changes offer several opportunities to strengthen the role of civil society, but many in civil society are also worried that mainstreaming processes could undermine the multi-stakeholder nature of EITI. In the wider context of continued attacks on civic freedoms and dialogue (hereafter called “civic space”) and democratic values, there are concerns that the role civil society plays more generally in national resource governance decision making may be jeopardized.
With this brief, the authors aim to contribute to the nascent discussion around EITI mainstreaming by exploring civil society opportunities and concerns in detail. In doing so, they outline ways that those involved in EITI processes, including the board, the international secretariat, development partners and country-level multistakeholder groups, could take steps to address civil society concerns, encourage civil society engagement in mainstreaming processes, and most importantly, increase the mainstreaming of civil society consultation and participation itself. To do this, they start by providing background information on mainstreaming. They then give an overview of four opportunities and three key concerns that have been voiced relating to the role of civil society in EITI. For each of the concerns they raise, they identify several ways that actors in EITI processes, especially at the country level, can support civil society to be fully, actively and effectively engaged in the shifts associated with mainstreaming. These approaches apply to all stages of mainstreaming, from planning to the application process to the oversight of implementation.