Evidence-based Reflections on Natural Resource Governance and Corruption in Africa 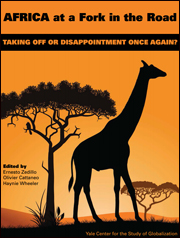 The Yale Center for the Study of Globalization (YCSG) has published a new e-book, Africa at a Fork in the Road: Taking Off or Disappointment Once Again? The book is the product of an April 2014 conference hosted by the center that aimed to assess Africa’s key development opportunities and challenges.

NRGI president Daniel Kaufmann spoke at the conference, and contributed a chapter to the book. Entitled “Evidence-based Reflections on Natural Resource Governance and Corruption in Africa,” Mr. Kaufmann’s contribution consists of a comparative empirical exploration of governance in Africa, with a particular focus on the challenges in managing natural resources such as hydrocarbons and minerals.

His perspective is empirical in that it is evidence-based; he reviews some relevant indicators across time and space, and this perspective includes the nexus between political, economic, and institutional dimensions of governance.

“Kaufmann tackles…with serious concern, [an] aspect of governance that is crucial for the development of not a few African countries: that of natural resource governance. He documents that most resource-rich countries, certainly those in Africa, have substantial deficits in governance that cause poor management of those resources, with the consequence of excluding the poor from the benefits of that wealth. He predicts that on present trends the proportion of poor people living in resource-rich countries will have increased from 20 percent in 1990 to 50 percent by 2030. He perceives corruption to be at the root of this worrisome trend but warns that corruption is itself the symptom of a broader institutional weakness and governance failure. This circumstance, afflicting many resource-rich countries, must be tackled and a good place to do so is in the management of those resources for true development purposes.”