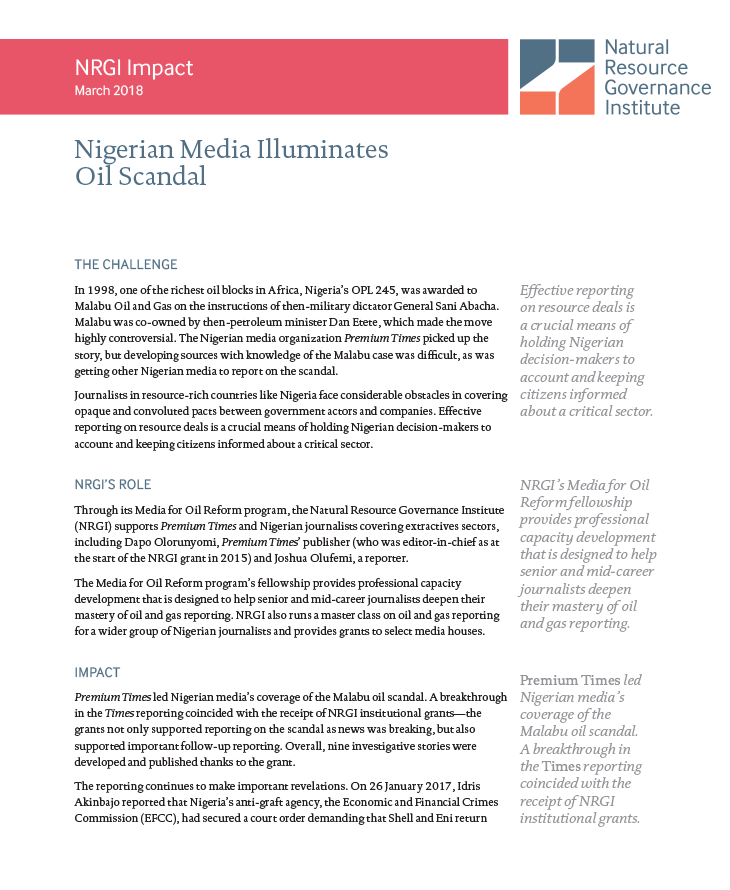 In 1998, one of the richest oil blocks in Africa, Nigeria’s OPL 245, was awarded to Malabu Oil and Gas on the instructions of then-military dictator General Sani Abacha. Malabu was co-owned by then-petroleum minister Dan Etete, which made the move highly controversial. The Nigerian media organization Premium Times picked up the story, but developing sources with knowledge of the Malabu case was difficult, as was getting other Nigerian media to report on the scandal.

Journalists in resource-rich countries like Nigeria face considerable obstacles in covering opaque and convoluted pacts between government actors and companies. Effective reporting on resource deals is a crucial means of holding Nigerian decision-makers to account and keeping citizens informed about a critical sector.

Through its Media for Oil Reform program, the NRGI supports Premium Times and Nigerian journalists covering extractives sectors, including Dapo Olorunyomi, Premium Times’ publisher (who was editor-in-chief as at the start of the NRGI grant in 2015), and Joshua Olufemi, a reporter.

Premium Times led Nigerian media’s coverage of the Malabu oil scandal. A breakthrough in the Times reporting coincided with the receipt of NRGI institutional grants—the grants not only supported reporting on the scandal as news was breaking, but also supported important follow-up reporting. Overall, nine investigative stories were developed and published thanks to the grant.

The reporting continues to make important revelations. On 26 January 2017, Idris Akinbajo reported that Nigeria’s anti-graft agency, the Economic and Financial Crimes Commission (EFCC), had secured a court order demanding that Shell and Eni return OPL 245 to the Nigerian government. The article went on to note that 70 percent of the USD 1.1 billion Shell and Eni paid to a Nigerian government account went to Etete, who then transferred half of the amount to accounts controlled by a Nigerian national wanted for fraud in Italy.

The EFCC in March led a nine-count charge against Etete and other conspirators. In late May, Akinbajo and colleague Samuel Ogundipe reported that the Nigerian government told a U.K. high court that the transfer of money to Etete’s account was illegal according to Nigerian law.

The Malabu story and the lawsuits around the case are convoluted and constantly evolving. NRGI will continue to support Akinbajo and his peers, who have committed to continue their aggressive coverage of the scandal.