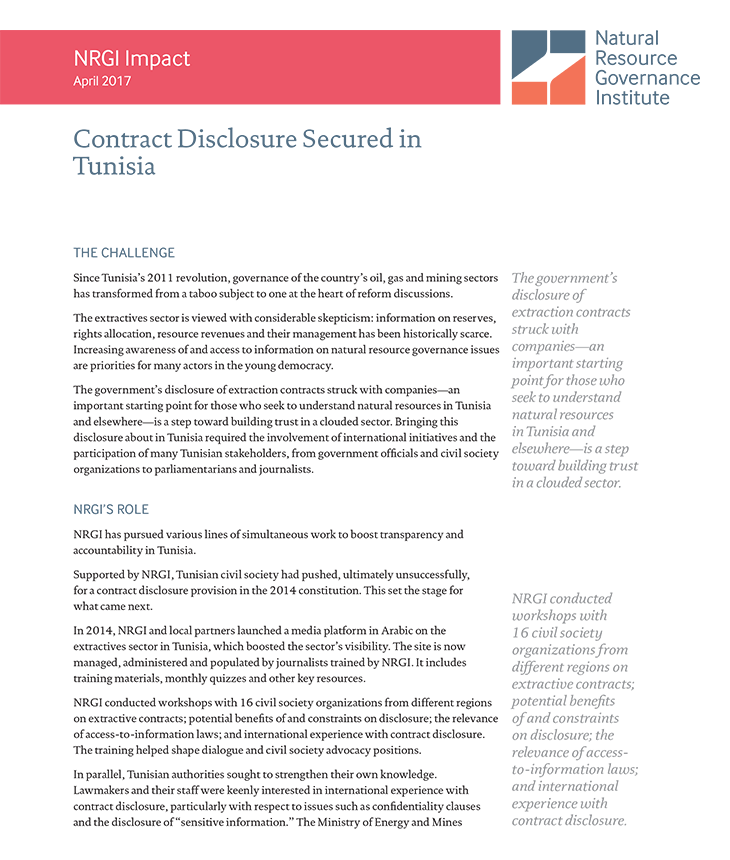 Since Tunisia’s 2011 revolution, governance of the country’s oil, gas and mining sectors has transformed from a taboo subject to one at the heart of reform discussions.

The extractives sector is viewed with considerable skepticism: information on reserves, rights allocation, resource revenues and their management has been historically scarce. Increasing awareness of and access to information on natural resource governance issues are priorities for many actors in the young democracy.

The government’s disclosure of extraction contracts struck with companies—an important starting point for those who seek to understand natural resources in Tunisia and elsewhere—is a step toward building trust in a clouded sector. Bringing this disclosure about in Tunisia required the involvement of international initiatives and the participation of many Tunisian stakeholders, from government of officials and civil society organizations to parliamentarians and journalists.

NRGI has pursued various lines of simultaneous work to boost transparency and accountability in Tunisia.

Supported by NRGI, Tunisian civil society had pushed, ultimately unsuccessfully, for a contract disclosure provision in the 2014 constitution. This set the stage for what came next.

In 2014, NRGI and local partners launched a media platform in Arabic on the extractives sector in Tunisia, which boosted the sector’s visibility. The site is now managed, administered and populated by journalists trained by NRGI. It includes training materials, monthly quizzes and other key resources.

In parallel, Tunisian authorities sought to strengthen their own knowledge. Lawmakers and their staff were keenly interested in international experience with contract disclosure, particularly with respect to issues such as confidentiality clauses and the disclosure of “sensitive information.” The Ministry of Energy and Mines and the legal department within the prime minister’s office reached out to NRGI to convene a discussion around contract publication. In March 2016, with NRGI’s help, representatives from relevant government ministries, the national oil company, parliamentarians, the anticorruption authority and civil society organizations participated in a roundtable discussion.

Following years of multi-stakeholder work, and concurrent with the report’s release, Tunisia’s government in June 2016 published 50 of the country’s oil contracts, and shortly thereafter announced second-level contract disclosures. As of January, 157 resource-related contracts had been released, along with annexes.

These releases were important milestones in a broader campaign for extractive sector transparency in the country. It was the most visible of many tangible gains, but the process was incremental, and intensely collaborative.

The government’s actions can be understood, at least in part, as a response to civil society players supported, trained and enabled by NRGI and peer organizations.

Anyone should be able to use contract data, and many Tunisian stakeholders require training. Institutionalizing pro-transparency measures so that they last longer than a single administration is equally important. NRGI is issuing a grant for civil society to research these contracts, with the resulting analysis due for publication mid-2017.

A website that provides an open data platform for disclosed resource contracts was launched in October 2016, and NRGI is training media and civil society actors to parse the contents. The 129 hydrocarbon investment contracts and associated documents published on the site initially lacked summaries of key contract terms. In December 2016, the Columbia Center on Sustainable Investment, an NRGI partner, trained two Tunisian legal experts on the annotation process.

This systematic national approach to contract transparency is a first for Tunisia and the Middle East and North Africa region. In addition to the obvious transparency impact, many involved foresee a governance impact, addressing broader mistrust within and between Tunisian society and government. Highly polarized and divided political rivals have taken up the cause of transparency, and recognize that natural resource governance is essential for ensuring a prosperous, democratic Tunisia.

Much work remains on contract transparency and disclosure in Tunisia. But advocates now have a firm foothold.