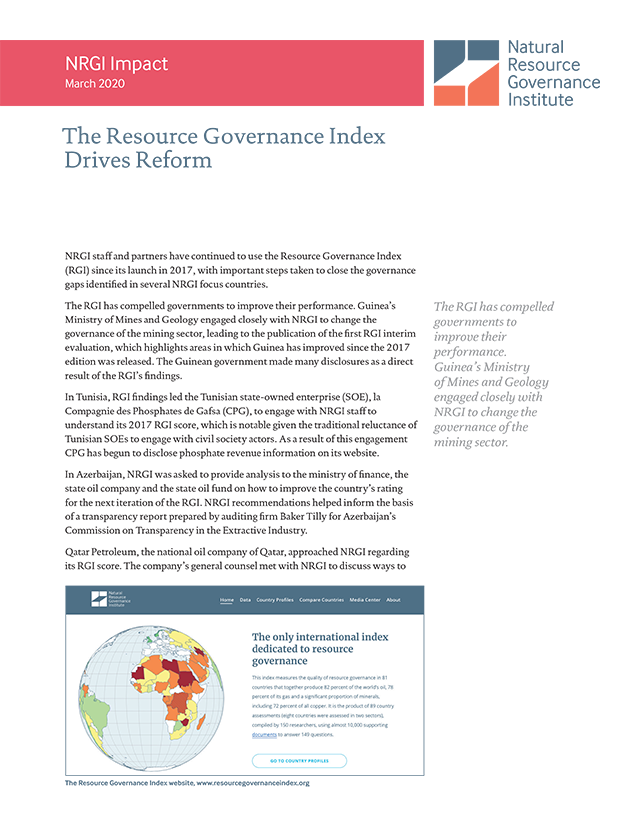 NRGI staff and partners have continued to use the Resource Governance Index (RGI) since its launch in 2017, with important steps taken to close the governance gaps identified in several NRGI focus countries.

The RGI has compelled governments to improve their performance. Guinea’s Ministry of Mines and Geology engaged closely with NRGI to change the governance of the mining sector, leading to the publication of the first RGI interim evaluation, which highlights areas in which Guinea has improved since the 2017 edition was released. The Guinean government made many disclosures as a direct result of the RGI’s findings.

In Tunisia, RGI findings led the Tunisian state-owned enterprise (SOE), la Compagnie des Phosphates de Gafsa (CPG), to engage with NRGI staff to understand its 2017 RGI score, which is notable given the traditional reluctance of Tunisian SOEs to engage with civil society actors. As a result of this engagement CPG has begun to disclose phosphate revenue information on its website.

In Azerbaijan, NRGI was asked to provide analysis to the ministry of finance, the state oil company and the state oil fund on how to improve the country’s rating for the next iteration of the RGI. NRGI recommendations helped inform the basis of a transparency report prepared by auditing firm Baker Tilly for Azerbaijan’s Commission on Transparency in the Extractive Industry.

Qatar Petroleum, the national oil company of Qatar, approached NRGI regarding its RGI score. The company’s general counsel met with NRGI to discuss ways to improve performance and NRGI advised the SOE to publicly disclose annual and sustainability reports. Subsequent to the meeting, Qatar Petroleum published annual and sustainability plans for the past 14 and eight years respectively, for the first time, on its website.

Civil society organizations and journalists in dozens of resource-rich countries have used RGI data to diagnose governance successes and shortcomings. In Nigeria, BudgIt used the RGI to support advocacy around contract transparency and the governance of the SOE NNPC by creating infographics and sharing them through social media channels. In Ukraine, Dixi Group used the RGI to support its advocacy around the development of the “Law on Ensuring Transparency in the Extractive Industries,” which was then passed. Newspapers from Mexico to Myanmar have referenced the RGI in articles about resource governance. In these instances, the most relevant findings are translated into pertinent, accessible messages for a country’s citizens.

Using RGI data, NRGI found that in all but two African countries, there is an “implementation gap” between what laws say and how resource governance works in practice. This insight, and others uncovered in the report, have provided a further foundation from which to engage our stakeholders in Africa, and globally. The index data have been leveraged in research by the United Nations Economic Commission for Africa on the state of African governance, referenced in a Swiss federal council report on gold trade and human rights violations and used in a study on the state of extractives disclosures by the European Commission.

The RGI is also a resource for the private sector and investors. Morgan Stanley’s emerging markets bonds group has begun using the RGI to assess potential investments in resource-rich countries. In at least one instance, the group used RGI findings to inform discussions with a resource-rich government in which they are considering investment. Further, multinational investment bank Citi reported using RGI data extensively for the bank’s environmental, social and governance work.