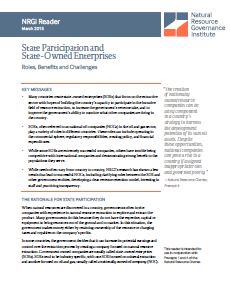 Download
Primer: State Participation and State-Owned Enterprises (PDF 179.2 KB)
Topics
State-owned enterprises
Precepts
P1 P6 What are Natural Resource Charter precepts?
Social Sharing
The creation of nationally owned resource companies can be a key component in a country’s strategy to harness the development potential of its subsoil assets. Despite these opportunities, national companies can pose a risk to a country if assigned inappropriate roles and governed poorly. Types of Revenue Flows To and From SOEs - State Participation

Copper Giants: Lessons from State-Owned Mining Companies in the DRC and Zambia

What to Watch for at NNPC