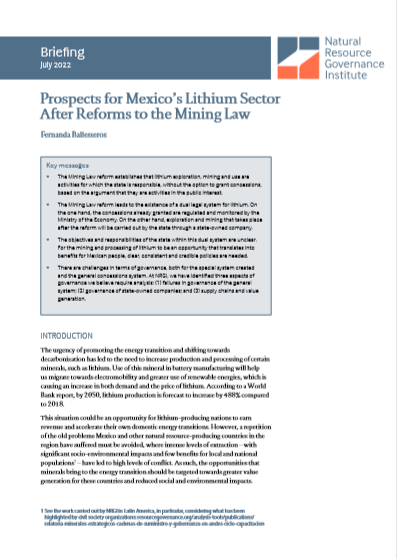 The urgency of promoting the energy transition and shifting towards decarbonization has led to the need to increase production and processing of certain minerals, such as lithium. Use of this mineral in battery manufacturing will help us migrate towards electromobility and greater use of renewable energies, which is causing an increase in both demand and the price of lithium. According to a World Bank report, by 2050, lithium production is forecast to increase by 488% compared to 2018.
This situation could be an opportunity for lithium-producing nations to earn revenue and accelerate their own domestic energy transitions. However, a repetition of the old problems Mexico and other natural resource-producing countries in the region have suffered must be avoided, where intense levels of extraction – with significant socio-environmental impacts and few benefits for local and national populations1 – have led to high levels of conflict. As such, the opportunities that minerals bring to the energy transition should be targeted towards greater value generation for these countries and reduced social and environmental impacts.

In Mexico, discussions on critical minerals – and lithium, in particular – are at an early stage compared to the progress made by other countries in the region. Given the recent discovery of significant lithium deposits in Sonora, the Mexican Government has reformed the country’s Mining Law in order to give this particular mineral strategic significance and create a special system in which the state has greater control than it would otherwise have over other minerals. However, the Government is facing a series of political, technical, environmental and social challenges2 that must be addressed, given they could create obstacles to Mexico making good use of this resource. Improvements in lithium governance could help eliminate or mitigate these challenges and lead to greater benefits of its usage.

This report seeks to identify some of the most urgent aspects for discussion and resolution from the perspective of natural resource governance. To do so, we will first briefly outline recent changes to Mexico’s Mining Law, as well as their implications and, then, the key aspects of lithium governance that we at NRGI believe must be analyzed in order to maximize the benefits of productive activities related to this mineral in the national interest. Photo by jet 67 for Shutterstock