Tanzania and Statoil: What Does the Leaked Agreement Mean for Citizens? 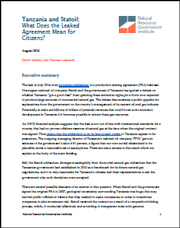 The leak in July 2014 of an important addendum to a production sharing agreement (PSA) between Norwegian national oil company Statoil and the government of Tanzania has ignited a debate on whether Tanzania “got a good deal” from granting these extraction rights for a block now expected to produce large amounts of commercial natural gas. The debate demonstrates a public appetite for explanations from the government on the country’s management of its nascent oil and gas industry. Potentially at stake are billions of dollars of potential revenues that could boost socio-economic development in Tanzania if it becomes possible to extract these gas resources.

An NRGI financial analysis suggests that the deal is not out of line with international standards for a country that had no proven offshore reserves of natural gas at the time when the original contract was signed. Thus claims that the addendum is on its face grossly unfair to Tanzania appear to be premature. The outgoing managing director of Tanzania’s national oil company TPDC gave an estimate of the government’s take of 61 percent, a figure that our own model determined to be plausible under a reasonable set of assumptions. There are some caveats to this result which we explain in the body of the main briefing.