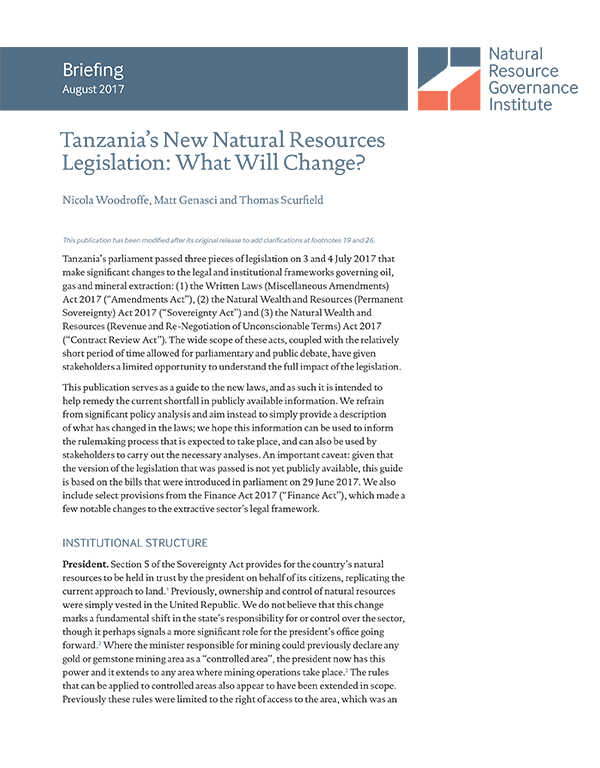 Note: This publication has been modified after its original release to add two clarifying footnotes.

Tanzania’s parliament passed three pieces of legislation on 3 and 4 July 2017 that make significant changes to the legal and institutional frameworks governing oil, gas and mineral extraction: (1) the Written Laws (Miscellaneous Amendments) Act 2017, (2) the Natural Wealth and Resources (Permanent Sovereignty) Act 2017 and (3) the Natural Wealth and Resources (Revenue and Re-Negotiation of Unconscionable Terms) Act 2017. The wide scope of these acts, coupled with the relatively short period of time allowed for parliamentary and public debate, have given stakeholders a limited opportunity to understand the full impact of the legislation.

This publication serves as a guide to the new laws, and as such it is intended to help remedy the current shortfall in publicly available information. NRGI authors refrain from significant policy analysis and aim instead to simply provide a description of what has changed in the laws; we hope this information can be used to inform the rulemaking process that is expected to take place, and can also be used by stakeholders to carry out the necessary analyses. An important caveat: given that the version of the legislation that was passed is not yet publicly available, this guide is based on the bills that were introduced in parliament on 29 June 2017. We also include select provisions from the Finance Act 2017, which made a few notable changes to the extractive sector’s legal framework.