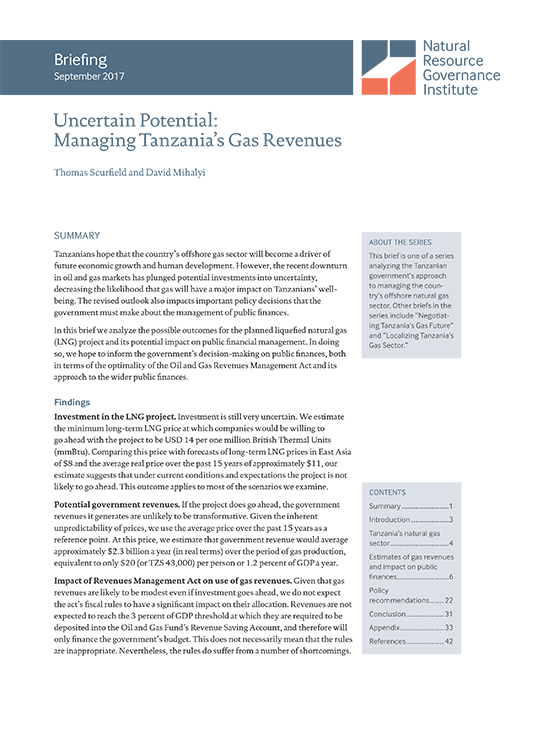 This brief is one of a series analyzing the Tanzanian government’s approach to managing the country’s offshore natural gas sector. Other briefs in the series include “Localizing Tanzania’s Gas Sector” and “Negotiating Tanzania’s Gas Future.”

The weaker price outlook has plunged potential investments in Tanzania’s promising offshore gas sector into uncertainty, and reduced the likelihood that gas will have a major impact on Tanzanians’ well-being. This revised outlook also impacts important policy decisions the government must make about the management of public finances.

In this brief, we use a financial model to analyze the possible outcomes for the planned liquefied natural gas (LNG) project and its potential impact on public financial management.

Based on specific assumptions, we estimate the minimum long-term LNG price at which companies would be willing to go ahead with the project to be USD 14 per mmBtu—significantly higher than forecasts of long-term prices in East Asia of $8 and the average real price over the past 15 years of approximately $11. Even if the project does go ahead, the government revenues it generates are unlikely to be transformative. At the historical price of $11, we estimate that they would average $2.3 billion a year (in real terms) over the period of gas production, equivalent to only $20 (or TZS 43,000) per person or 1.2 percent of GDP a year.

Given these projections, the fiscal rules in the Oil and Gas Revenues Management Act are unlikely to have a significant impact on the use of gas revenues or public spending. This does not necessarily mean that the rules are inappropriate. Nevertheless, they do suffer from a number of shortcomings, which the brief discusses.

More broadly, one of the most important policy implications of uncertain and likely modest gas revenues is that the government should not base its public finance plans on the expectation of a gas windfall. Tanzania appears well placed to avoid this mistake, but caution is advised and increased efforts to improve budget transparency and manage the public’s expectations about the likely limited impact of gas revenues are needed.