The battle against the coronavirus is above all a public health crisis. Needless to say, the response to the crisis is having enormous economic repercussions. Some countries have imposed sweeping shutdown and isolation measures to contain the spread. As a result, businesses are closing and unemployment is soaring.

Countries that are net exporters of oil and gas will perhaps experience the biggest shock. As of early April, Brent crude was trading at USD 25 per barrel and forecast to decline, a result of plummeting demand, a growth in supply and a lack of storage capacity. This represents the biggest single negative oil price shock in modern history.

Central banks have been the first public authorities to respond to the crisis in many oil-dependent countries.  For example:

But central banks can only provide liquidity; they cannot prevent insolvencies. In response, several oil-dependent governments have promised to enact fiscal stimulus packages. In addition to a discount on electricity bills and free internet, Malaysia has focused on cash transfers, including a one-off USD 144 for tourist guides, a monthly USD 150 for medical personnel, and money for specific groups such as low-income households, civil servants and students. Iran is providing cash payments to the poorest households, while Kazakhstan is providing free groceries to the disabled and unemployed. Canada’s oil-rich province of Alberta is allowing people to defer electricity and gas payments. Russia reduced social insurance contributions for SMEs, increased unemployment benefits and sick leave, and increased monthly child support payments by USD 63 per child under 3 years of age. Qatar announced a USD 20.6 billion package, including food and medical goods customs exemptions and utilities bill exemptions for SMEs. Governments are set to announce more support measures soon.

What will these measures achieve? Will stimulus boost economic production, keeping people in jobs, especially where social safety nets are weak? And how will the impact differ in oil-dependent states versus more diversified economies?

First, national experiences will depend on whether governments have prepared for a crisis. Kazakhstan, Kuwait, Malaysia, Norway, UAE, Russia, Saudi Arabia and Trinidad and Tobago have enough fiscal space to maintain public spending well into 2021 despite a collapse in government revenue, as suggested by CDS spreads on their sovereign debt, an indicator of default probability, as well as net debt figures. Each has significant savings in sovereign wealth funds or relatively low public debt levels. Moreover, with the exception of Malaysia and Trinidad and Tobago, each produces oil relatively cheaply, meaning their oil sectors are likely to generate significant revenue for their governments once the worst of the crisis is over.

Other governments of oil-producing countries had weaker public sector balance sheets heading into the crisis. Ecuador may default on its debt within the month. Nigeria’s sovereign debt rating was downgraded. Venezuela ran out of fiscal space to provide stimulus years ago. And Iraq does not have the administrative capacity to address either the economic crisis or health emergency. None of these countries is likely to be able to effectively mitigate the impact of the crash through more borrowing or drawing down on savings; the same is true for many other low-income oil producers.

Second, for many oil-dependent countries, the sharp drop in oil prices may lead to a disproportionately large fall in oil revenue. If prices remain low, some companies operating in countries where it’s relatively expensive to produce oil (such as Angola, Brazil, Canada, Malaysia, Trinidad and Tobago, the United States and Venezuela), could go bankrupt, leading to sustained lower output. In some places, oil production may never again reach pre-crisis levels due to technological “shut-ins.” Officials in many high-cost producer countries should expect a long-term decline in GDP rather than a temporary shock and therefore should not expect to “spend their way” out of the slump.

Third, governments of oil-dependent countries aiming to stimulate their economies through fiscal transfers to businesses face limited choices of where to allocate money. Many countries have only small and nascent productive sectors outside the oil industry. Economies in places like Algeria, Angola, Azerbaijan, Libya, Saudi Arabia, Timor-Leste and Trinidad and Tobago are not diversified, meaning there are fewer businesses that, with financial support, could quickly generate jobs and keep the economy churning. Even where there are businesses to support, governments cannot support many of them, since increased economic activity in some industries and much of the service sector risks spreading the virus. Officials in oil-dependent countries may therefore need to direct stimulus packages toward vulnerable groups, such as the poor or jobless, rather than businesses. 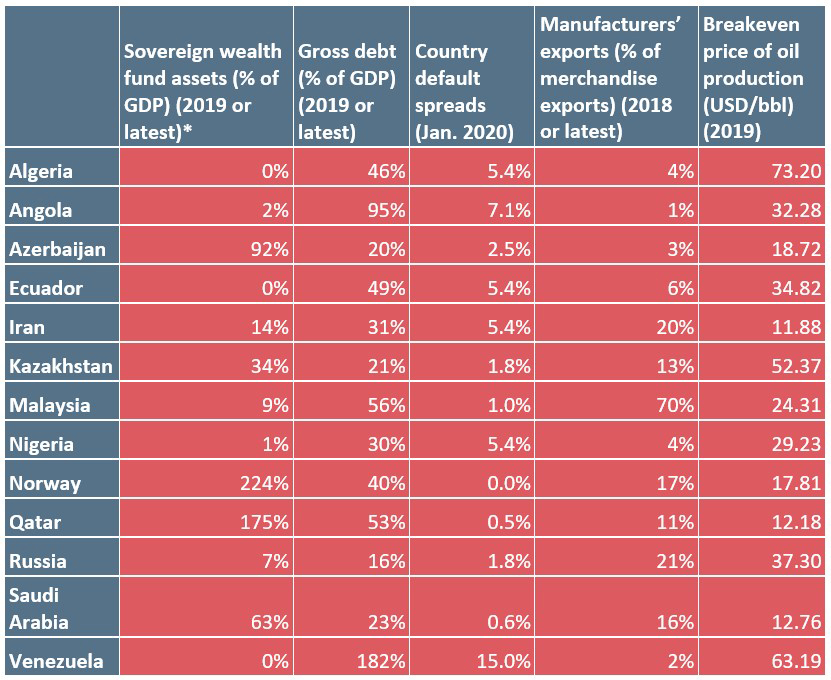 Each country faces its own challenges, as illustrated in the table; no single policy would be applicable in every context. That said, officials in net hydrocarbon exporting countries could consider several general principles as they formulate their policy responses to the crisis:

1. Consider the role of sovereign wealth funds and borrowing

As mentioned, some governments entered the crisis with significant fiscal space, thanks to large sovereign wealth fund savings or low debt levels. Fiscal responsibility during boom years is designed to provide the space to draw down on savings or borrow during periods of crisis, such as now. Short- to medium-term borrowing may make sense now, with historically low interest rates available for those countries with access to credit. Governments may be wise to rely on models to determine how much fiscal space to use.

On the other hand, several oil-dependent countries have entered the crisis following a borrowing binge. Angola, Cameroon, Chad, Colombia, Republic of Congo, Ecuador, Equatorial Guinea, Gabon and Mexico were among those who had approached the International Monetary Fund before the crisis for program financing or a line of credit, meaning they already had difficulties financing themselves at higher oil prices. In recent weeks, Ecuador, Iran and Nigeria were among the 85 countries that approached the IMF for emergency assistance. Countries without fiscal space will at the minimum need to negotiate a moratorium on servicing external public debt, including repayments of oil-backed loans to oil traders and Chinese policy banks, and seek emergency support from multilateral and bilateral donors.

2. Resist the temptation to provide stimulus to the oil industry, whether through subsidies or tax cuts

There is a great deal of uncertainty around medium-term oil prices; some analysts suggest that they will not rebound for some time, while others say that the industry will contract quickly, leading to supply challenges and a swift price rebound next year. At the same time, public and private oil companies in several countries have been requesting large bailouts or tax relief. Government officials must consider the risks of “throwing good money after bad,” especially given the enduring climate challenge and the need to shift to renewable energies. Governments ought to resist hasty demands and properly evaluate (and model) the viability of projects at lower prices. If an oil company is facing insolvency, alternatives to a bailout can include seeking new investors or returning licenses to the state.

3. Devalue currencies slowly (in some countries)

Lower oil prices means far less foreign currency entering government coffers. This is already putting pressure on currencies. The implication is that countries like Ecuador, Iraq, Saudi Arabia and Timor-Leste and the CEMAC monetary union (including Chad, Gabon and Republic of Congo), which have dollarized or pegged their currencies to the U.S. dollar or  the euro, will need to draw down on their foreign reserves or sovereign wealth fund savings or borrow foreign currency to maintain their pegs. Some countries, especially in the Persian Gulf, have the foreign savings to withstand years of low oil prices. But officials in others may need to choose whether to maintain their pegs, essentially subsidizing imports using their national savings, or devalue their currencies, leading to higher prices for imported goods, especially basic goods such as food, processed fuel and medication. As some countries run low on foreign currency, they may have to either seek assistance from bilateral or multilateral donors or devalue. In general, it is better to slowly depreciate rather than suddenly devalue under duress, generating another detrimental shock for consumers and many businesses.

Authorities in oil-rich countries may want to use this “pause” to plan for the future, especially those that are historically poor at long-term investments in infrastructure and education. Governments could use this opportunity to improve their medium-term development plans, focusing on energy transitions and supporting economic diversification. One small example is Trinidad and Tobago’s plan for a USD 7.5 million grant facility for Tobago hoteliers to upgrade their hotel rooms. If unemployment stays high into 2021, as is likely in many countries, governments could use the excess labor to (re)build critical infrastructure, such as high-speed internet, water and sanitation and public transport, to improve competitiveness and quality of life over the long run.

Andrew Bauer is a consultant to the Natural Resource Governance Institute (NRGI). David Mihalyi is a senior economic analyst at NRGI.