Mining subcontractors are important taxpayers and drivers of economic development. But they have not received the same level of attention as mining companies do in terms of transparency, accountability or tax contributions. Guinea, however, has been a pioneer in including information about subcontractors in its Extractive Industries Transparency Initiative (EITI) reports. (Mali also does it.) This is a trend that we at NRGI expect to grow as governments, companies and citizens become more interested in understanding the role subcontractors play.

Guinea’s 2017 EITI report is more detailed than ever before, a marked step forward in reporting about subcontractors.

The number of subcontractors included in EITI reports has grown from 11 in 2014 to 19 in 2016, and is up to 36 with the latest report. By including subcontractor names, EITI reports increase the accountability of companies that are often unknown to the public. This can also help Guinean entrepreneurs identify business opportunities: subcontractors are also obliged to meet local content targets of the country’s mining code and will often “sub-subcontract” smaller works, easier for small and medium-sized enterprises to take on. They also complement government efforts like the Guinea subcontractor exchange, a multi-stakeholder platform aiming to connect local suppliers to mining companies, launched in December 2018. Elsewhere, companies such as Rio Tinto, with its Oyu Tolgoi mine in Mongolia, have also taken steps to disclose who their suppliers are.

Revenues recorded from subcontractors operating in Guinea grew more than four-fold between 2016 and 2017, from GNF 234 billion (USD 25.3 million) to GNF 1,016 billion (USD 112.8 million). (See figure below.) The contribution of subcontractors to total extractive revenues covered in EITI reports grew from 8 percent in 2016 to 24 percent in 2017, reflecting the recent boom in the country’s mining sector. Indeed, typically, anywhere between 30 and 90 percent of mining project spending goes to subcontractors and suppliers. 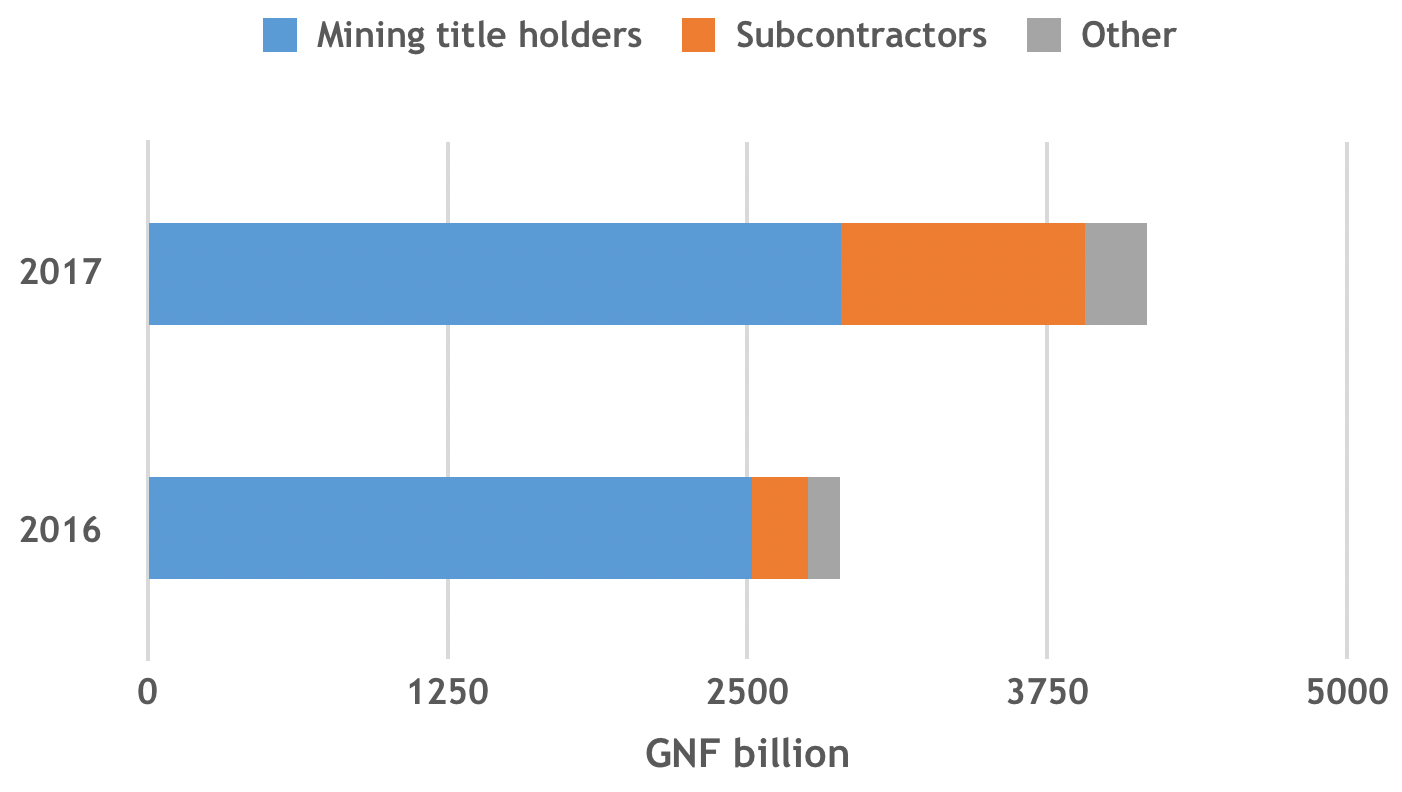 To date, this type of information is sparse in most mining countries, showing the value of Guinea’s effort. But EITI reporting can go further. Many countries already track progress on local content in EITI reports. Although subcontractors are not directly covered by the EITI Standard, requirement 6.1 mandates extractive industry companies to disclose material and in-kind social payments, including commitments to local employment and procurement. If ratified as expected in the next EITI board meeting later this month, the new standard will encourage countries to describe the rules and practices related to state-owned enterprises’ operating and capital expenditures, procurement, subcontracting and corporate governance. As countries are making progress toward the 2020 EITI timeline for beneficial ownership disclosure, some national EITI secretariats are starting to consider including subcontractors. Many subcontracting governance risks relate to complex ownership structures, such as cost inflation in subcontracting between related parties or conflicts of interest.

In summary, in Guinea and elsewhere, complementary reporting by government and country-level EITI multi-stakeholder groups can generate the following types of information for regulators, which prospective entrepreneurs and citizens can use to monitor progress and ensure accountability in the process of allocating subcontracts: