This is the second in a series of posts from the Natural Resource Governance Institute (NRGI) and World Resources Institute (WRI) research project on gender and extractives, carried out with support from the Open Government Partnership Multi Donor Trust Fund, which is managed by the World Bank. Learn more about the project in this blog post.

As the Natural Resource Governance Institute (NRGI) and World Resources Institute (WRI) continue our research on gender, open government and extractives, we often find ourselves frustrated by a lack of relevant data and policies. The absence of gender-disaggregated data is not unique to the extractive sector; it is an issue that plagues many different fields. While many countries are making commitments to gender equity, without this data, countries often develop policies that don’t account for the unique experiences and needs of men, women, boys and girls. Governments are working to address labor biases, create diversification strategies that are gender-inclusive, build inclusive tender practices, create enhanced environmental monitoring and develop gender responsive revenue management. However, without data disaggregation, it’s difficult to know who is participating and to hold governments accountable.

In Invisible Women: Data Bias in a World Designed for Men, a bestselling book that won the 2019 Financial Times and McKinsey Business Book of the Year Award, author Caroline Criado-Perez explains the pervasive absence of gender-segregated data, and its consequences: If we are not measuring or addressing the differentiated needs of women, we are ignoring them, and doing so often puts women at a disadvantage, and even in danger. Criado-Perez writes that this gendered data gap is not necessarily malicious or even deliberate, but instead results from assuming that women and men experience life in similar ways, when they so often don’t.

As has become apparent in natural resource extraction, oil, gas, and mining projects can impact people differently, often due to their gender or other identities. Oxfam Australia recently published a report on the various ways in which natural resource extraction can differently impact women and men’s lives and livelihoods. Their findings reveal that these projects can inadvertently reinforce existing power structures, disrupt the ways that women have traditionally earned their livelihoods or make physical spaces more dangerous for women. Unfortunately, the Oxfam report is rare; because data is so seldom disaggregated by gender, it is difficult to truly assess the impacts of extractives policies and harmful practices are likely replicated.

Laws and policies governing the extractive sector largely do not reflect an acknowledgement of (or effort to ameliorate) the industry’s differentiated impact. In surveying the laws, policies, regulations and guidelines governing the extractive sectors of 12 countries, our team found that most extractive governance documents are gender-blind. In our sample, only 25 documents that directly govern extractive activity mention “women” or “gender.” These mentions were more likely to appear in guidelines—the least binding form of documentation—than in laws, policies or regulations. In most countries it is faster and easier to pass guidelines than it is to create or amend laws, policies or regulations. Developing guidelines may lead to faster and nominally better consideration of gender. However, government actors and regulators may interpret guidelines as suggestions rather than mandates to which they must adhere, thus negating their potential impact.

While our research uncovered very few documents that referenced gender, we notice some trends from this small sample:

From “women” to “gender”

In analyzing these 25 documents, we found that over time the language that countries use to describe their efforts to address differentiated outcomes is shifting. Although references were scant, documents adopted from before 2011 more often used the term “women.” While “women” continued to be the more commonly-used term, in documents from 2011 to 2020, “gender” is used with increasing frequency (though the term is most often used simply as a substitute for “women”). While it’s not possible to draw definitive conclusions from this small sample, it seems that documents that use “gender” are more likely to also focus on participation and environmental and social impacts.

Mentions of “women” and “gender” 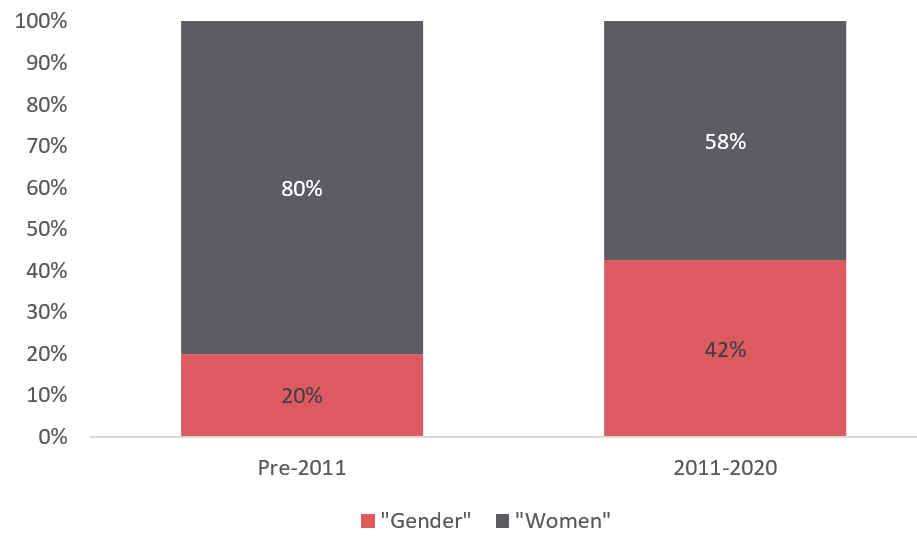 From the countries that we surveyed, the earliest document that governs the extractive sector and mentions women is a 1993 Ghanaian law that implements a quota for women’s participation on the board of the country’s minerals commission. But it would be some time before other countries followed suit. Most only began to adopt extractive documents that make reference to women or gender in the 2000s. In fact, 20 out of the 25 documents that we found were only adopted in the last ten years.

It seems that consideration of women and gender in extractive governance documents is a relatively recent trend, but one that will continue. In 2019, the Extractive Industries Transparency Initiative (EITI) adopted new gender-responsive requirements that mandate certain data disclosures around gender. This may prompt officials in more countries to begin thinking about the varied ways that extractive industries impact diverse groups of citizens and reflect this in policies and guiding documents. However, policymakers and legislators must match an increase in the number of references to gender issues with an increase in the quality of provisions in legal and policy frameworks. We found that references rarely reflect a thorough examination or understanding of gender issues; some were overly simplistic and potentially reinforced stereotypical views of women. We will examine this further in our future research, diving deep into three countries’ experiences.

As countries implement these policies with increasing frequency, it will be important to know which laws, policies, regulations and guidelines achieve their intended effect and which fail or cause further harm. Unfortunately, much of the data that we have about the differentiated impact of extractive projects is anecdotal. As in the industries that Criado-Perez highlights in her book, there is little disaggregated data available about the sector’s gendered affects, and it is difficult to collect enough data to draw conclusions based on the few laws, policies, regulations and guidelines currently in place. As we develop recommendations and work with governments on building Open Government Partnership commitments that lead to gender-transformative extractive governance, we will emphasize the need for data collection and disaggregation, working with changemakers to build understanding of how they can collect and use this data to benefit their countries’ development.

Photo by Suthep Kritsanavarin for NRGI.

Imagining the Future of Mining: Mapping and Considering Gender Impacts, Gaps and Policy Responses to Support Progress on the SDGs