In Indonesia, Where Rule-Making is Diffuse, a Better Method of Training Regulators 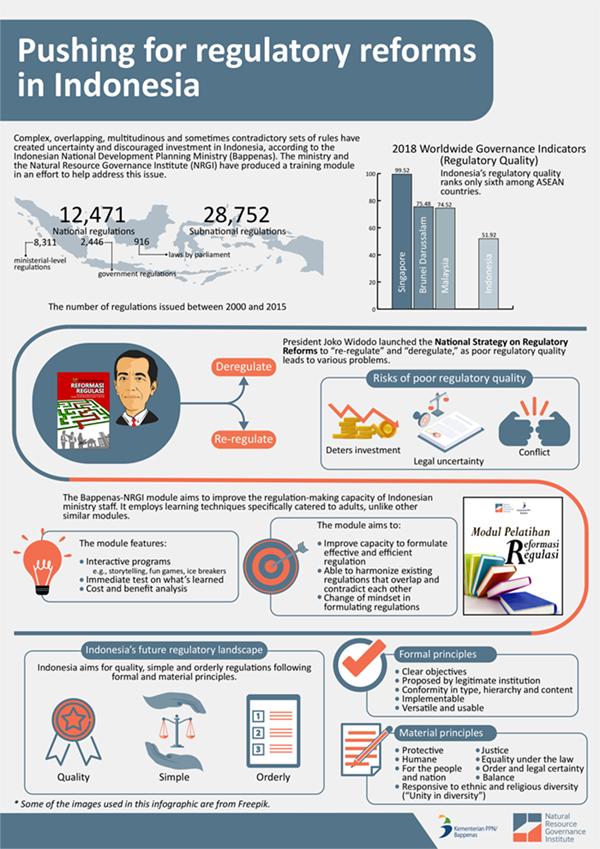 Complex, overlapping, multitudinous and sometimes contradictory sets of regulations have created uncertainty and discouraged investment in Indonesia, according to a key ministry.

Current President Joko “Jokowi” Widodo is pushing for “deregulation” and “re-regulation” in all sectors. A training module two years in the making for those directly involved in regulation from Indonesia’s ministry in charge of national development, known as Bappenas, and the Natural Resource Governance Institute might aid the effort.

A dissertation by Jember University’s Bayu Anggono found that at least 14 of 428 laws enacted between 1999 and 2012 fell short of principles for issuing legislative regulations laid out in a 2011 law. These principles state that regulations must have clear objectives, be proposed by a legitimate institution and be implementable.

Substantive regulatory weakness is indicated in the 2018 Worldwide Governance Indicators, where Indonesia ranked in the 51.92 percentile (100 being the best) in terms of regulatory quality, sixth in Southeast Asia. Singapore, Brunei and Malaysia were the top three regional performers, with scores of 99.52, 75.48 and 74.52, respectively.

In the oil, gas and mining sectors, investors have seen many cases of inconsistency between what is said by the central government—the authority for issuing permits—and the subnational government, the most visible source of power where companies work. There are also long delays in registering mining businesses. Many government officials concurred with this assessment.

The World Bank’s 2019 Doing Business report ranks Indonesia 73rd out of 212 countries for ease of doing business. Uncertainty in terms of starting a business, dealing with construction permits and contract enforcement could serve as deterrent for inflow of capital.

Among many factors, regulatory capacity plays a role in this shortcoming. Therefore, the module, a “living document,” will be used at the national and subnational governments as part of bureaucrats’ education and training programs. It will bolster previous modules that have been trying to translate the 2011 law.

This module puts special emphasis on engaging adult learning methods. Interactive programs like storytelling (to trigger active participation), fun games and icebreakers (to prevent boredom) are important parts of this module. Bureaucrats are also tested immediately after they receive lessons so that the knowledge they receive is sharpened.

Lessons start with pre-tests on the difference and correlation between policy and regulation. Questions such as, “Is policy more important than regulation?” and “Are the central and regional governments issuing too many regulations?” bring the participants back to the basics of policy-making and regulation.

The module trains on cost and benefit analysis, which no other modules have done. Course participants learn about the pros and cons of having or not having a regulation published and avoid the urge to produce a legislative product when there is unnecessary demand for it.

In the fourth quarter of 2018, the Communications and Information Ministry became the first user of this module. The Energy and Mineral Resources Ministry is set to begin training in the second quarter. This will be a big step toward pushing bureaucratic reforms in the extractive sector, especially with regard to doing business.

Upon completing the module, participants’ capacity to formulate effective and efficient regulations are expected to improve. They will also be able to harmonize the existing regulations that overlap with and contradict each other. Further, a change of mindset in the rule-making process will take place, preventing the same problem from happening again in the future.

There needs to be a concerted effort involving a large number of people and close coordination between ministries and agencies to see the fruits of these efforts. In addition to that, the new government must continue this effort as it brings about the changes that the country needs. The module’s release is an important step to that. Kudos to Bappenas.