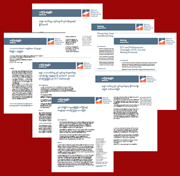 In a context of economic and political transition, the government has committed itself to increase transparency in its extractive sector. In July 2014 the country was accepted as an EITI candidate. In order to fully comply with the EITI Standard, Myanmar will have to take important steps to improve the transparency of its oil, gas and mineral sectors, particularly with respect to public disclosure of contracts.

Since 2013 NRGI has supported oversight actors in Myanmar to assert their role in improving accountability in the extractive sector. As part of our programming, we developed five briefings offering an overview of the current situation in the extractive sector on the following topics: EITI, contract disclosure, revenue management, state-owned enterprises and fiscal regimes. They are specifically written for members of parliament and offer strategies for successful engagement with extractive issues and suggest several action points for parliamentarians who wish to improve the governance and transparency of their country’s extractive industry. We hope they are also of use to others interested in improving resource governance in Myanmar.

Maria Lasa Aresti is a consultant with NRGI.

Why Supreme Audit Institutions are Guardians of Resource Governance