On Wednesday, BP chief economist Spencer Dale warned of a long-term and permanent slump in oil demand as the world shifts away from fossil fuel use. The Financial Times quotes Dale as saying: “I think it is increasingly likely that there will be technically recoverable oil reserves which will never be extracted and if I was the owner of one of those companies which owned that oil I would have every incentive to make sure it wasn’t mine [left in the ground].”

The NGO Carbon Tracker, as part of its “stranded assets” campaign, has issued similar warnings for some time. But Dale explained that while oil companies such as BP have the ability to “shift capital in pursuit of the most attractive resources … producer countries and their national oil companies have less flexibility.” Campaigners highlight the long-term risks investors face in investing in the oil industry, but it is countries dependent on extraction who may well be left with the greatest exposure.

In the working paper “Stranded Nations? The Climate Policy Implications for Fossil Fuel-Rich Developing Countries,” Jim Cust, Giorgia Cecchinato and I explain why many of these developing nations are between a rock and a hard place. If the world does not switch to low carbon consumption, these countries face extreme weather-related problems caused by global warming. If the world embraces clean energy, they face a dramatic depreciation in the value of their fossil fuel wealth.

Our research confirms BP’s warning. Many developing countries have abundant fossil fuel reserves but extract fossil fuels at relatively slow rates. Therefore much of their hydrocarbon wealth will remain stranded underground under a scenario in which demand peaks and then declines in the 2040s, as BP predicts.

Most fossil fuel-rich countries will take at least 45 years to liquidate their fossil fuel wealth unless they can increase production rates. (weighted reserves-to-production, years) 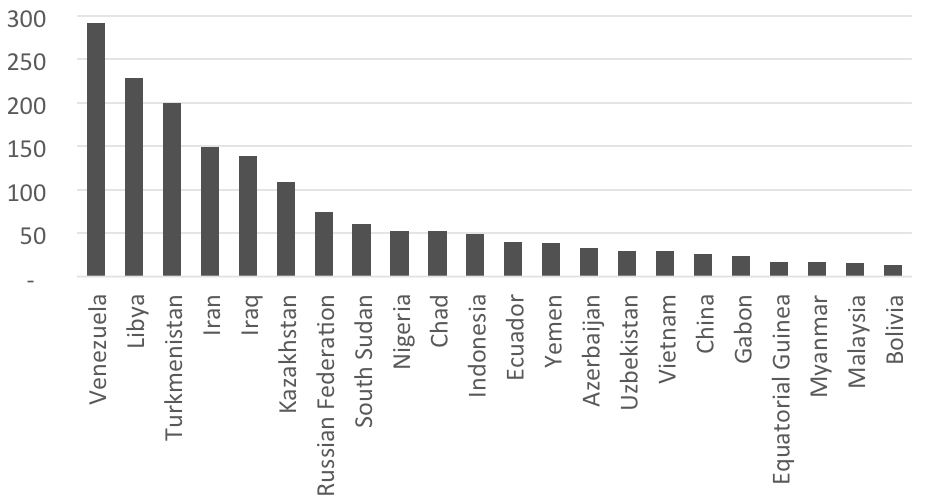 What can fossil fuel-dependent countries do? First, officials must recognize the dilemma they face and plan accordingly. Many of the good governance principles espoused in the Natural Resource Charter remain relevant. It is the urgency that has changed.

The ultimate solution for these countries is to diversify. Governments of countries with nascent fossil fuel industries—such as offshore gas developer Tanzania—must ask hard questions about how many human and public resources to invest in an industry that might yield minimal returns. Given the uncertain future, those committed to helping these countries govern their resources must also re-calibrate. Our working paper and efforts by others (here, here and here) are only the beginning.

David Manley is a senior economic analyst at the Natural Resource Governance Institute.