In recent months, violence has intensified in northern Myanmar. In the states of Kachin and Shan, dozens have been killed and thousands displaced since April. Meanwhile, the third round of the “Union Peace Conference-21st Century Panglong” is now six months overdue.

To date, one critical issue has been almost completely absent from the peace process: natural resource governance. While natural resources are by no means the root cause of conflict in Myanmar, or its primary driver, reforms to the extractives sector are important for achieving a comprehensive and lasting solution to the country’s decades-long conflicts. 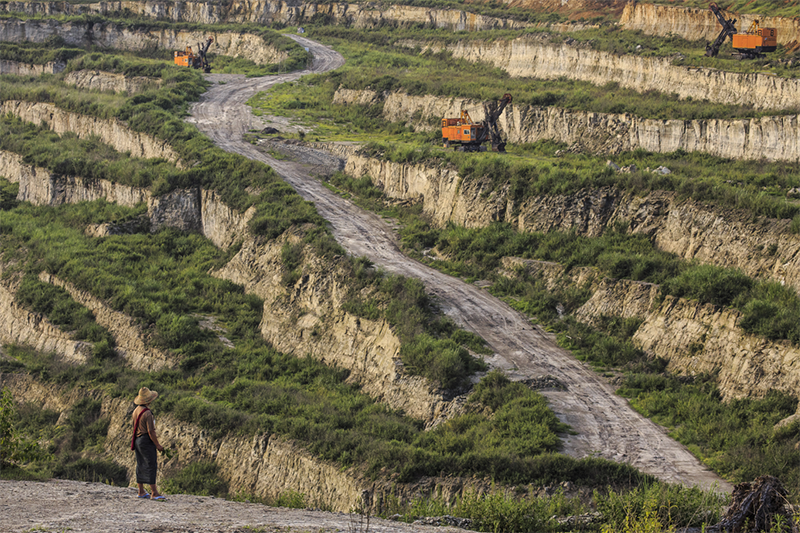 Photo by Suthep Kritsanavarin for NRGI

Nearly every state and region is home to oil, gas or mining activity. Renewable resources like forestry and hydro power are also widespread. Historically, the Union government has been responsible for managing the sector, which has been plagued by corruption, inefficiency, environmental damage and social conflict. Demands for more subnational control are widespread and overdue. Many stakeholders from resource-producing areas argue that they have borne the brunt of the sector’s negative impacts for decades while realizing few benefits. In many cases, calls for control of resources are tied up with broader historical and political grievances, as well as existing development gaps, between ethnic minority-dominated areas and the central government.

Natural resources also play a more direct role in the country’s conflicts. The jade industry is perhaps the most well-documented case of financial involvement by the Tatmadaw and ethnic armed organizations. However similar patterns exist beyond jade. For example, Union of Myanmar Economic Holdings Limited, a military-owned conglomerate, has major stakes in tin and tungsten mines in Kayah State. Senior figures within the United Wa State Army are reportedly closely involved in the tin sector. In some cases, violence correlates with competition for control of specific assets, seen for instance in recent clashes in Kachin’s amber and gold mining districts.

The organizers of the “Union Peace Conference-21st Century Panglong” intend to bring together the government, military and ethnic armed organizations to chart a shared vision for the country’s future. A key aspiration is the eventual establishment of a federal Union.

However, while the last round of talks, held in May 2017, led to the formulation of 37 “principles” that would underpin a federal Myanmar, little attention was paid to what federalism would mean for the management of the country’s oil, gas, gemstones, copper, gold and tin, or its renewable resources. This is despite—or perhaps precisely because of—the importance of these resources to Myanmar’s economy and their role in driving many of the country’s long-standing conflicts.

Resource governance reforms will be essential for lasting peace. Not only is there a need to deliver greater benefits to communities on the ground but the Union government must find ways to involve local stakeholders in how the sector is managed. Beyond the peace process, tentative steps in this direction are underway. The Union government has increased revenue transfers to states and regions and granted certain governance responsibilities to subnational institutions (e.g., the issuing of licenses for artisanal and small-scale extraction). To date however, these developments have been piecemeal and marred by ambiguity.

The peace process requires a frank and informed discussion about natural resources and how the full range of responsibilities for the management of the sector could most sensibly be divided between the Union, the country’s states and regions, and potentially even townships or communities. Citizens must experience the benefits of resource extraction.

Myanmar is not alone in grappling with these questions. Recent research conducted by the Natural Resource Governance Institute shows that unitary and federal states alike recognize the importance of subnational empowerment. However, there is no single model for achieving this. Unitary countries typically allocate certain responsibilities to subnational governments (e.g., environmental monitoring) while even highly federalized states usually maintain some responsibilities at the national level (e.g., setting tax rates). In other cases, responsibilities might be shared (e.g., granting licenses). International experience can provide guidance but ultimately Myanmar must chart its own path.

To achieve this, participants in the peace process should not shy away from discussing natural resources. In the build-up to the next round of talks, participants should formulate clear policy positions and aim to develop a consensual set of principles to form part of a future peace accord.

The empowerment of subnational stakeholders cannot wait until the peace process is complete. The Union government should continue to lay the groundwork for a future federal union by involving subnational institutions in resource governance in an accountable, transparent and inclusive manner.

The government’s priority should not only be to respond to the demands of the competing voices in the peace process but also, crucially, to address the sector’s broader existing social, environmental and governance challenges. This could help to breathe new life into the peace process.

Sebastian Sahla is an associate at the Natural Resource Governance Institute (NRGI) in Yangon.