On 26 October 2015, the Natural Resource Governance Institute, the World Bank, and the Columbia Center on Sustainable Investment (CCSI) relaunched ResourceContracts.org in advance of the Open Government Partnership Summit in Mexico City. ResourceContracts.org was initially launched in 2012 as a searchable database of publicly available oil, gas, and mining contracts. Throughout 2015, the partners behind ResourceContracts.org have worked to develop a set of new features, expand access to contract data, and enhance the volume of contracts on the site. 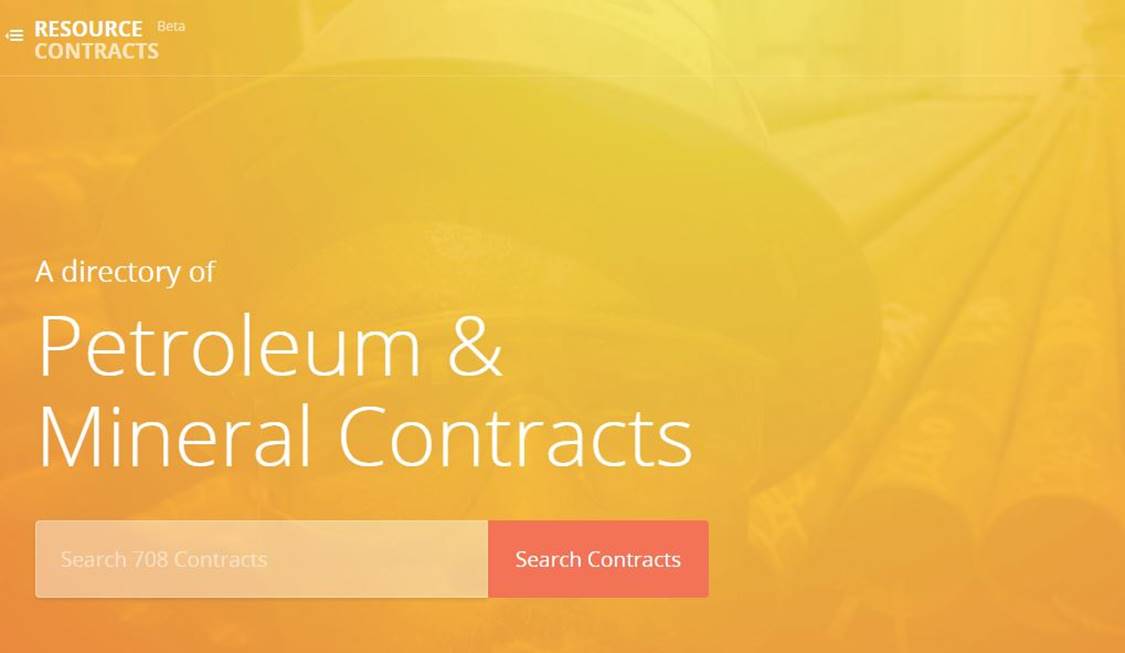 With a global contract repository in place, the project team can provide tools that enable policymakers, communities, and investors to understand existing contracts and use this knowledge to inform future deals made in the extractives sector.

As a one-stop-shop hosting a range of contracts from all over the world, providing easy-to-understand summaries of key terms, and enabling users to see commonalities and differences between their own countries’ contracts and others’, the site enables stakeholders to take advantage transparency to further accountability. The intended beneficiaries of ResourceContracts.org include:

The site is meant as a tool to enable policy research and investigative journalism to improve accountability by offering both detailed text-based annotations and data mining across contract. =

The new ResourceContracts site currently hosts more than 700 contracts and associated documents, including recent additions from countries such as Mali, the Democratic Republic of Congo and Peru. From Mexico, we are releasing new contracts between Pemex and private oil companies; and in the Philippines, we have partnered with EITI Philippines to release 87 contracts and associated documents through a designated country site Over the coming months, the site will grow further as we aim to provide a comprehensive overview of the current state of extractive disclosure. Improvements to contract transparency have been significant over the past years, thanks to a combination of unilateral disclosure by companies and the recommendation on contract disclosure within the Extractive Industries Transparency Initiative (EITI) Standard. There is, however, still much to be done. A recent study by the EITI international secretariat found that just twelve out of 23 EITI countries fully or partially disclose extractives contracts.

Obtaining the contract is only the first step. A scanned PDF-document can be time-consuming to analyze or review. When the government of Mali, for example, releases acontract with no contextual information, ResourceContracts.org will provide some of the key meta-data which is needed for conducting further analysis. This information makes it easier to find contracts by specific company, commodity, or contract type.

A tool for research

A key goal of ResourceContracts is to make publicly available contracts accessible by 1) explaining key terms and 2) enabling search through hundreds or thousands of pages of contracts. The site can help a researcher who, for example, is examining specific clauses on arbitration or bonuses in hydrocarbon contracts from East Africa.

To facilitate the understanding of contracts, the site features a growing number of contracts (currently more than 120) that have been annotated by legal researchers at CCSI. Each annotated contract is provided with an overview of key clauses across main topics such as operational, fiscal, environmental, and social provisions.

To facilitate the search processes, and to enable researchers to download and mine data across contracts, each contract is machine-readable. By utilizing high-quality optical character recognition, the site turns PDF-pages into searchable text. So far, more than 33,000 pages of PDF documents have been unlocked for searching, indexing, and data mining. For contracts that are too difficult for computers to convert to text, the site uses human transcription.

As we unlock a growing number of contracts, our analysis will deepen. We undertook a first attempt at this was during a data dive we held last week. We searched a series of key terms using the ResourceContracts API, leading to findings on, for example, the appearance of the word arbitration across contracts. The chart below plots the frequency of this across the currently available contracts. 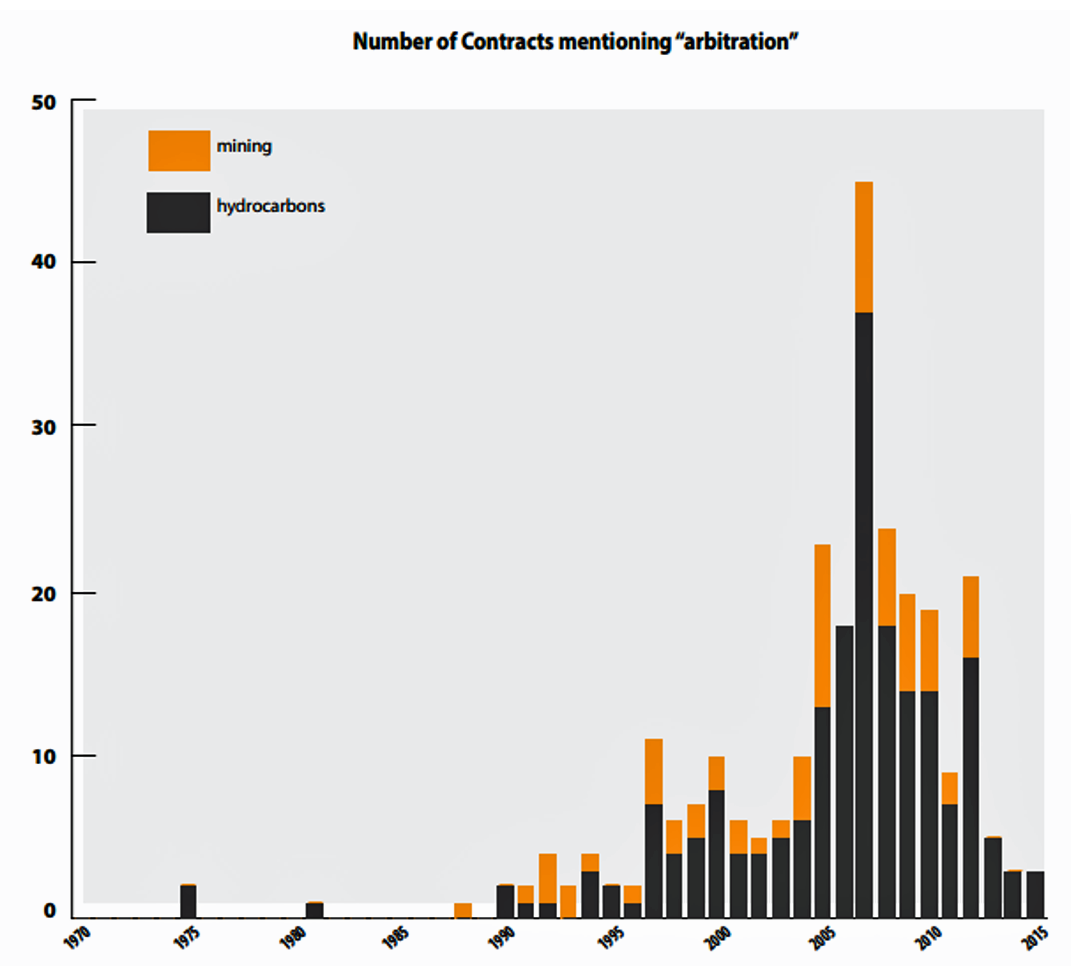 Extractives contracts as part of the wider open data ecosystem

One of the key challenges that the project team has heard from researchers and civil society actors is the diversity of demands for contract data. An environmental civil society organization might use ResourceContracts as part of a broader investigation of the enforcement of environmental regulation, while a fiscal researcher might need to compare how contracts align within the legal framework of a specific country. Recognizing that the site will be used in a variety of distinct research scenarios, we have built the site around interoperability and data re-use as core principles. All content is therefore openly licensed and can be downloaded directly as a PDF, CSV files or text documents and accessed through the API.

The Open Contracting Data Standard provides each contract with an Open Contracting Identifier in order to enhance interoperability with other databases. In order to enable researchers to examine company ownership and corporate relationships, we have matched more than 100 extractives companies to OpenCorporates, the world’s largest open company database. We are working with the Joined Up Data Alliance and Cadastato further strengthen data standardization and thereby make analysis, comparison, and data reuse even easier for users.

How to get involved?

We are now inviting feedback and contributions to the site and the content. You can get involved by joining the Google group or by submitting feedback on Github. We look forward to working with civil society organizations, researchers, and journalists to analyze these contracts. For government agencies and EITI country secretariats, we will offer ResourceContracts as a platform for contract publishing as we have previously done inGuinea (2013) and the Philippines (2015). 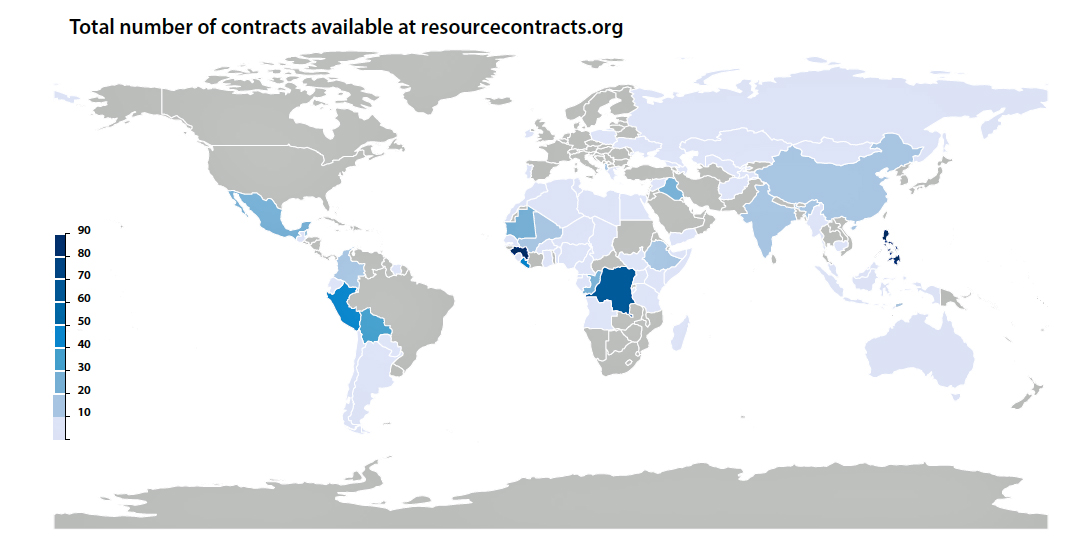 Anders Pedersen is an open data officer at the Natural Resource Governance Institute (NRGI). Perrine Toledano is the head of extractive industries at the Columbia Center on Sustainable Investment (CCSI).

The graphics on ResourceContracts.org and in this blog post were produced by NRGI data and analysis associate Giorgia Cecchinato.