Recent moves away from the global fight against corruption by governments in powerful countries such as the United States ought not to mask progress in other places, such as Botswana, Chile, Costa Rica and Georgia. The Baltic countries demonstrate that the difficult post-communist transition can include successes in good governance and corruption control. And New Zealand and the Scandinavian countries have long been committed to anticorruption.

So it is no surprise that Norway was last week host to a policy forum to discuss pathways to address corruption in extractives around the world. The event cued up an international board meeting of the Extractive Industry Transparency Initiative (EITI) taking place this week in Ethiopia, where anticorruption will be discussed further. It is noteworthy that addressing corruption in extractives is part of the meeting agenda, a process to which we at NRGI will continue to contribute with an eye on helping EITI to attain concrete results.

The latest data from the just-released Worldwide Governance Indicators (WGI) confirms that resource-rich countries, with some exceptions, face major corruption challenges. (See figure below.) Since this is a politically difficult problem, the risk of the response becoming window dressing or a mere communications and awareness exercise is real—and a risk that citizens in corruption-affected resource-rich countries can ill afford. In addition to the enormous costs that corruption carries in terms of socio-economic decline, it also undermines democratic institutions, fuels violence and is an obstacle to the energy transition and environmental protection. 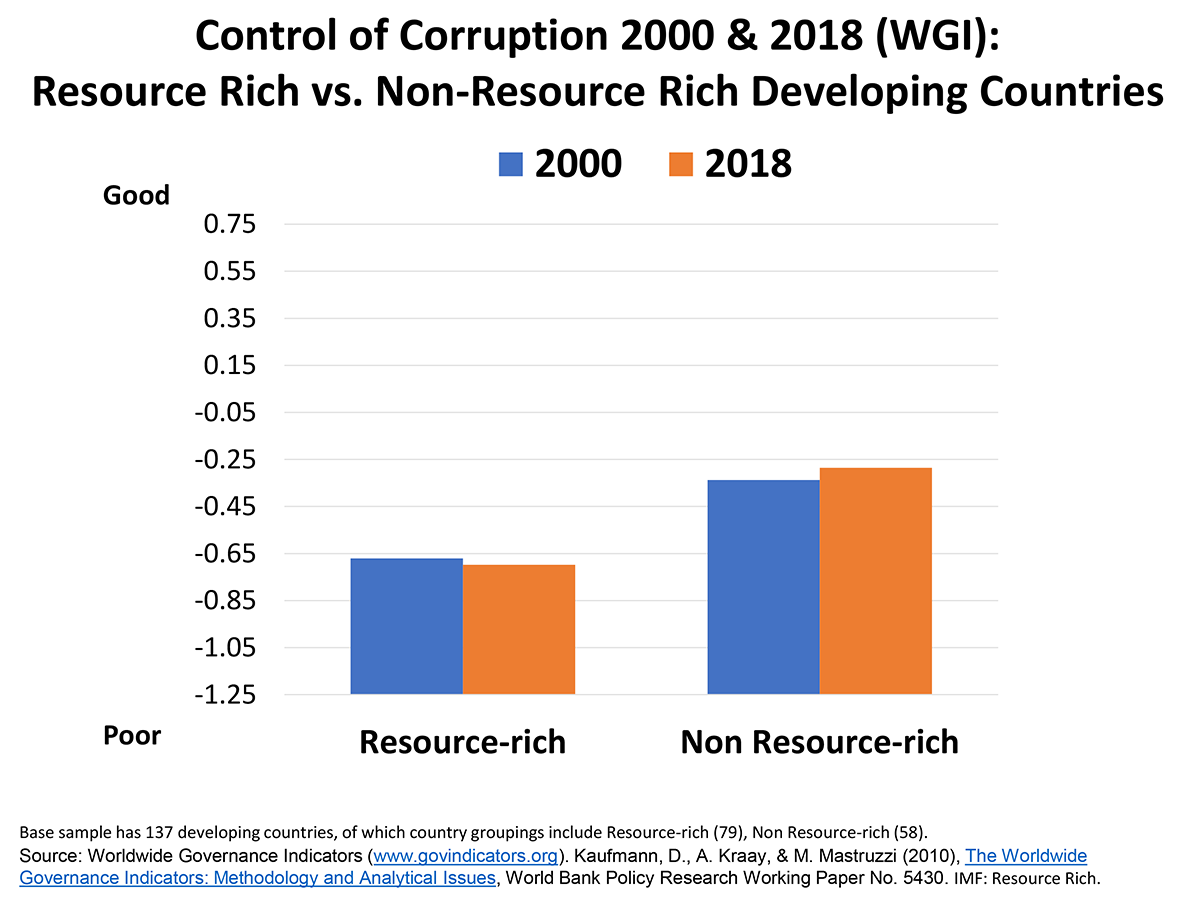 One of the drivers of the EITI’s inception over fifteen years ago was in fact the need to address corruption, but subsequently the connection between the initiative and this objective became more muted. The EITI often operated on the implicit premise that commitments to disclose payments between extractive companies and governments would translate automatically into less corruption. It didn’t take long to figure out that transparency alone—even when fully implemented, which is rare—was a necessary but insufficient condition for the attainment of accountability and reduction of corruption.

A breakthrough for the initiative took place almost five years ago with the advent of EITI protocols, and subsequently safeguards, for oft-threatened civil society actors working to improve natural resource governance, and the concomitant civic space standards for country membership and performance standards in the EITI. (“Civic space” refers to the structures, processes and legal instruments, and the absence of restrictions, that make it possible for citizens to associate, organize and act on issues of interest to them.)

In framing the debate during last week’s forum in Oslo—which included interventions by EITI chair Helen Clark and Norad head Jon Lomøy—I highlighted the importance of protecting EITI gains in upholding civic space standards, which are at risk of being undermined. The analysis of WGI data continues to point to a very clear link between measures of “voice and accountability,” on the one hand, and “control of corruption,” on the other, and applies to resource-rich EITI member countries as well as others. 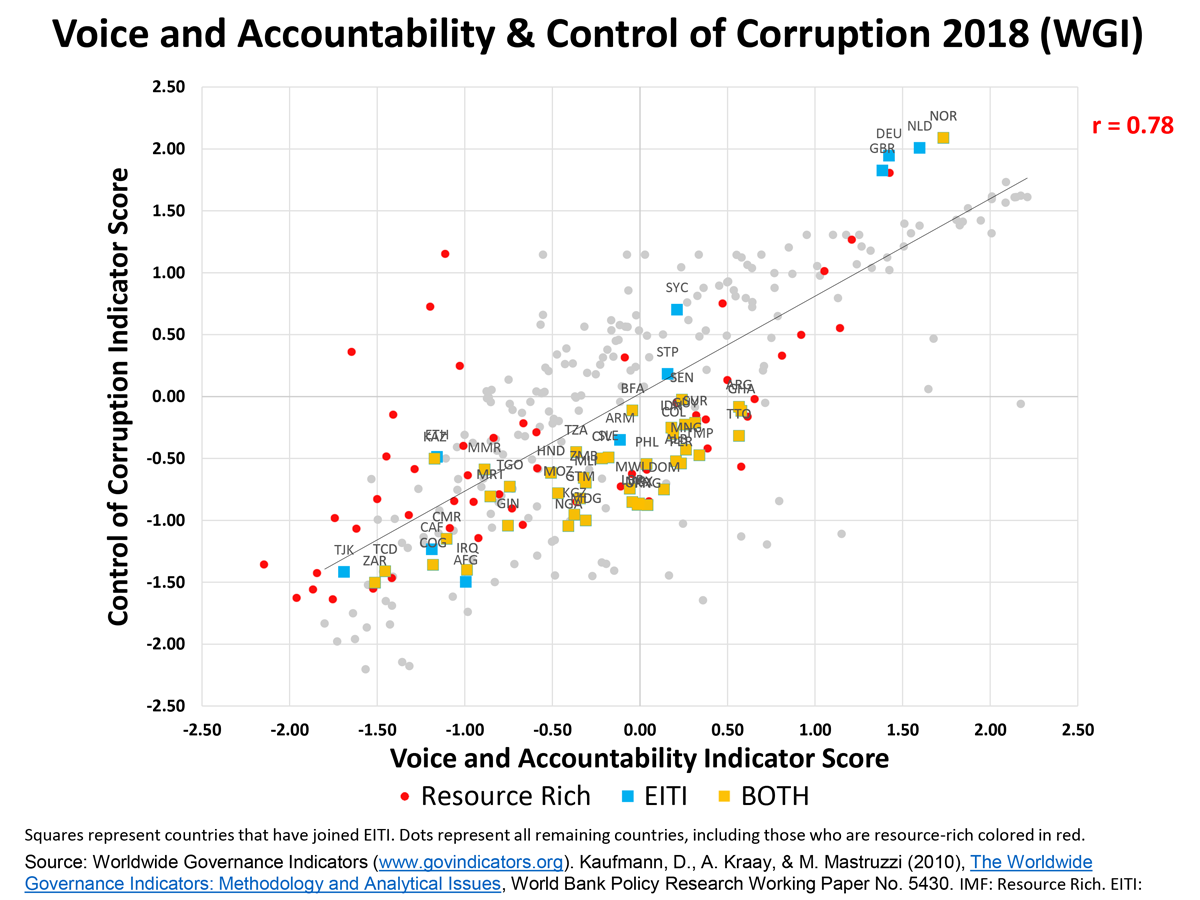 Further, additional evidence emerging from our research at NRGI on EITI countries supports a sustained focus on safeguarding the environment within which civil society operates. In recent years a number of papers have studied whether implementing the EITI has been associated with improved governance; results have been generally mixed or inconclusive. Yet by analyzing different groups of countries with the most recent data we initially find that averages across all countries are misleading and instead we detect two distinct trends. First, the performance on civic space of older EITI members, admitted to the initiative under lower standards (including on civic space), deteriorated over time, while the performance of more recent entrants to the initiative has improved: 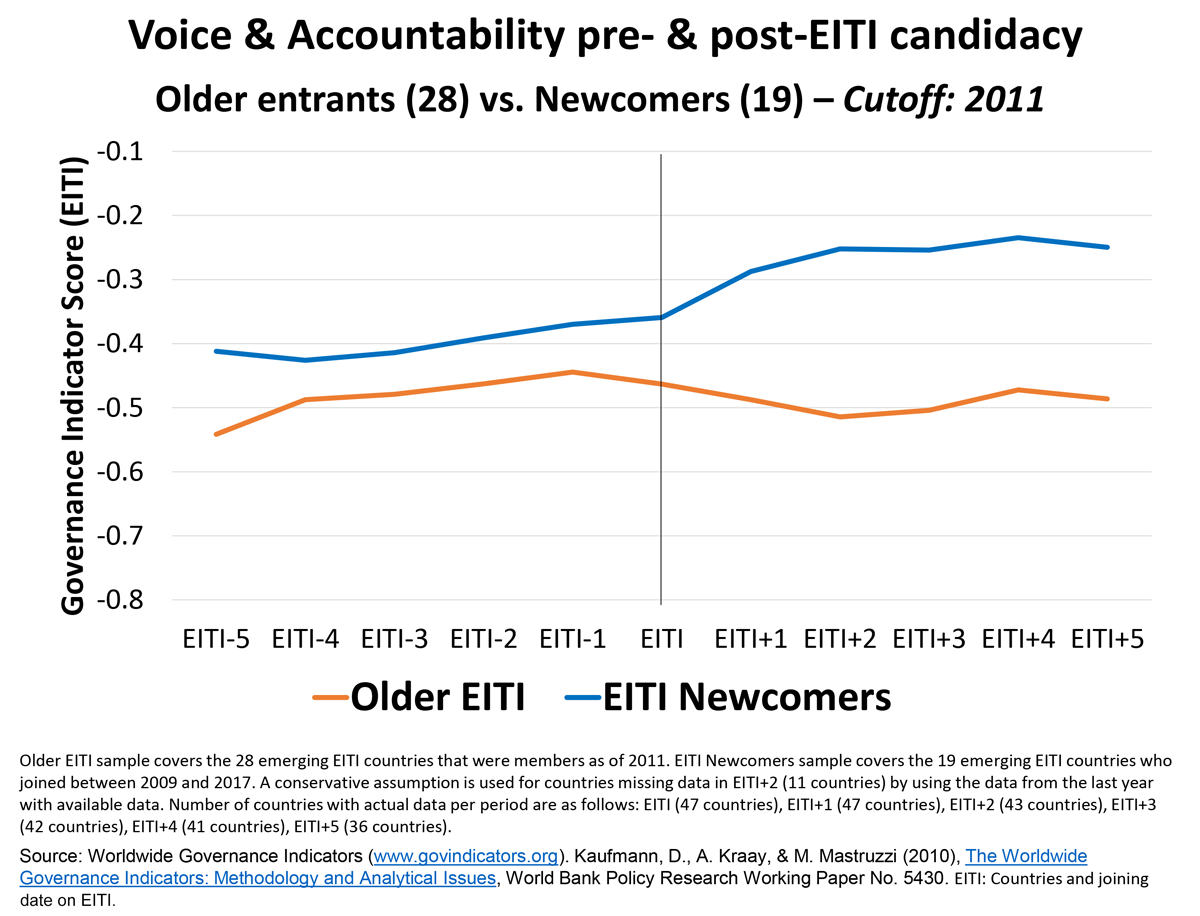 Second, and not surprisingly given the importance of civic space to addressing corruption, a very similar pattern is evident regarding the contrasting performance on corruption control of old versus new EITI members: 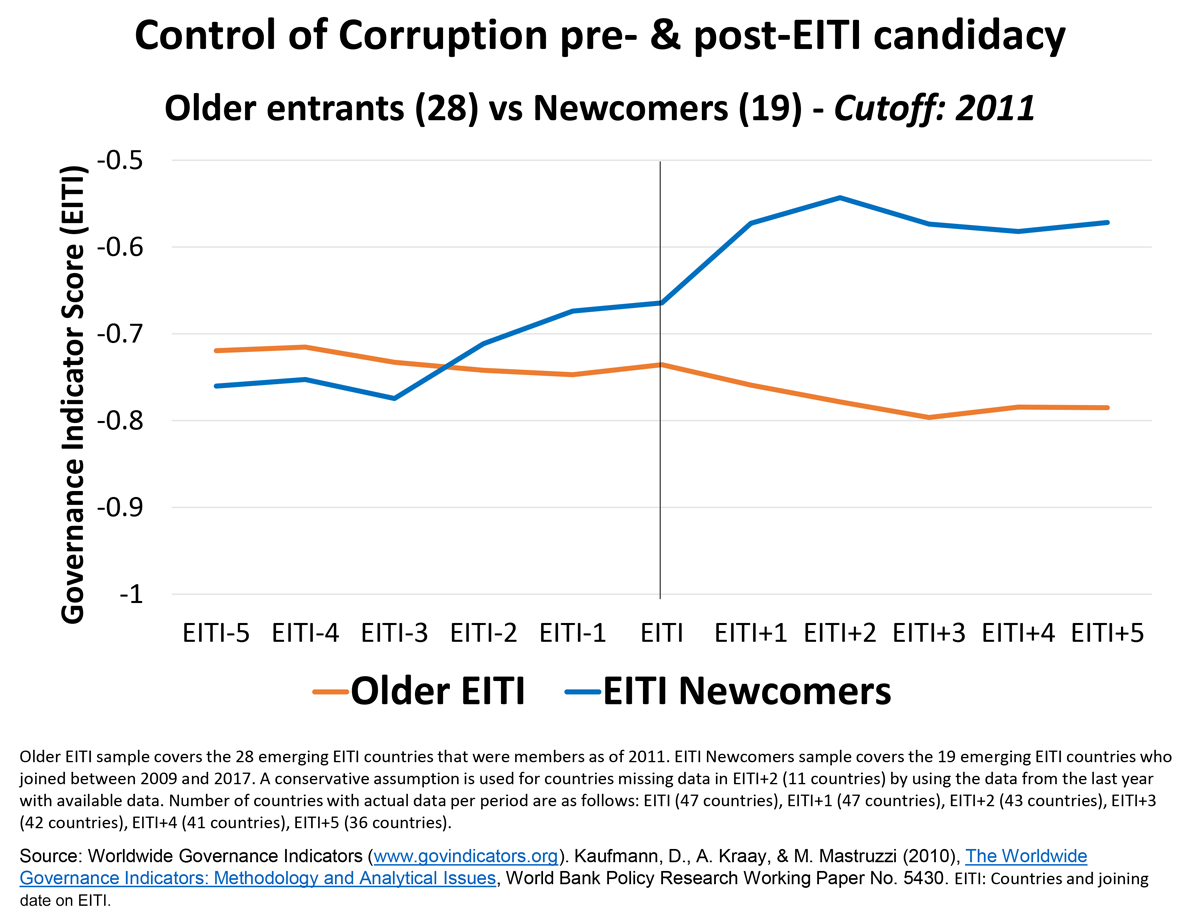 An enabling environment for civil society, complementing transparency, is necessary to address the corruption challenge; thus, any undermining of civil society safeguards in EITI would constitute a major step backward in the fight against corruption. Yet in addition to safeguarding civic space there are important complementary measures required to make progress in controlling corruption.

Countries intent on making progress on anticorruption would be well served by undertaking in-depth and evidence-based diagnostics of their governance and corruption risks and the vulnerability of their institutions. In so doing, a number of countries, and particularly key institutions, are likely to be found to be afflicted by “state capture” perpetrated by powerful private and political elites, as has been prominently the case in recent times in countries like South Africa, Brazil and Ukraine, among others. In a capture scenario, the powerful few not only may abuse the implementation of laws and regulations, but actually shape them for their own benefit at enormous cost to society. In such settings, addressing corruption necessitates a different approach than that needed to counter traditional types of transactional and administrative corruption.

In this context, it is also essential that private industry actors (including investors), key stakeholders in EITI, step up to the plate and embrace rigorous integrity and anticorruption standards, including in their dealings with governments and national oil companies. While some in industry have progressed, other major international extractive companies—whether producers or traders—still cling to opacity, engage in tax avoidance and other mechanisms that coopt resource rents belonging to citizens, or are embroiled in major corruption scandals. These companies should no longer should have a place in initiatives such as EITI. And it’s not just private companies that need to improve; there is also an urgent need to design and implement programs to improve the governance of most state-owned extractive enterprises (SOEs). Progressive players in private industry, as well as well governed extractive SOEs such as Equinor in Norway, Ecopetrol in Colombia and Codelco in Chile, with facilitation by EITI and NRGI, could play an important role in incentivizing other SOEs to improve governance and address corruption risks.

Further, as demonstrated by the “Car Wash” scandal that engulfed both Brazil’s state oil company Petrobras and the Odebrecht construction company (and spread to many other Latin American countries), powerful service providers (“subcontractors”) also engage in state capture and high-level corruption. The time is ripe for EITI to focus on the major role played by such suppliers. Private and public sector extractive producers bear responsibility in ensuring that suppliers adhere to transparency and integrity standards.

My final point in Oslo focused on the importance of concrete partnerships in the next stage of anticorruption work. EITI can have improved focus and results, but given its remit and membership, its impact will not be sufficiently global or comprehensive unless it further involves partners that can complement its important work. These would include the international financial institutions and private and multilateral banks, the OECD, the governments of supporting countries such as Norway, and non-governmental organizations such as NRGI and its civil society partners in specific countries and globally.

Note: This is based on Daniel Kaufmann’s presentation at the Norad policy forum “Natural Resource Management and Corruption: The Role of Transparency,” held in Oslo, Norway, on 8 October 2019. The full set of evidence-based slides can be found here. A related interview (in Norwegian) is here.

Daniel Kaufmann is the president and CEO of the Natural Resource Governance Institute (NRGI).