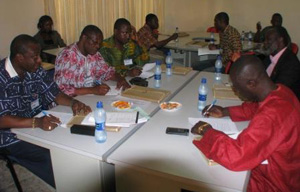 Dr. Keith Myers, the co-founder of Richmond Energy Partners, led a Revenue Watch Institute workshop on oil and gas governance for members of Ghana's parliament last October. The training was part of RWI's ongoing parliamentary project, created in partnership with the Parliamentary Centre. The event also benefited from budgetary support from GTZ. RWI asked Dr. Myers to share his reflections on the training and Ghana's oil future.

As a first-time visitor to Ghana, on the day before the workshop on good governance, I took a stroll around Accra. I asked a newspaper vendor what he thought of the new government. "Too early to say," he said, "but I'm not worried. And if they are no good we can change them again in four years." He then complained that the economy makes it hard for him to earn enough to buy enough food for himself and his family. So while democracy is working, Ghana still struggles to meet the basic needs of its people. What difference will oil make?

I recalled the comments of Ghanaian callers during a BBC phone-in show I visited shortly after the historic Jubilee oil field discovery in 2007: a find that constitutes Ghana's most significant and viable deposit of oil. It was clear that expectations were already high; "A gift from God," "We will be rich like Kuwait," and "We will not have to work again" were typical reactions.

2009 has been quite a year for Ghana. Following a closely fought presidential election and peaceful transition of power, Barack Obama chose Ghana for his first visit to Africa as U.S. President. And the Black Satellites, Ghana's Under 20 football team, just won the World Cup. 2010 will likely mark another landmark event: the first oil production from the billion-barrel Jubilee oilfield. The offshore field is the largest discovery of oil in Africa in the last decade. It has raised expectations of a transformative event for a country that currently ranks 152nd out of 182 countries on the UN's Human Development Index.1

Mindful of the vital role of good governance in the management of oil wealth, and of the continuing poverty and strife in Ghana's oil-rich neighboring countries, the Ghanaian legislators participated in Revenue Watch's parliamentary-strengthening program in oil and gas governance to prepare members of its Mines and Energy and Finance committees for the expected debates over the new oil and gas policy and associated legislation. The Parliament is made up of President John Evans Atta Mills' NDC party, with 115 seats, and the former governing party, NPP, with 107 seats.

The training, which was held in Sogakope, Ghana, in partnership with German nonprofit GTZ and the Parliamentary Centre, had several aims:

The course was held over three days and was facilitated by Ghanaian and international experts. Petroleum presents significant governance challenges for developing countries and the course focused on seven themes: the national political context; evaluating petroleum potential and challenges; state participation in the sector; the regulatory function; local content; revenue management; and policy and legislative framework. Designed to be highly interactive, the training was conducted under Chatham House rules to encourage dialogue.

The first phase of development for the Jubilee Field was sanctioned in 2008 and is anticipated to produce 120,000 barrels of oil per day. Training participants worked through simple calculations to determine the amount of government revenue per person that this phase could generate given Ghana's population of around 25 million. At $70/bbl we calculated this to be around $50 per person per year. This compares to the government budget of $270 per person per year. MPs expressed surprise at the discrepancy, and the accompanying reality that the newfound wealth was not immediately going to transform lives. "We need to manage the expectations of the people," said one trainee.

Another important point was that great uncertainty remains as to the ultimate scale and potential of petroleum resources. The MPs were introduced to concepts of risk and uncertainty when evaluating reserves. UK-listed company Tullow Oil has estimated the ultimate potential of the Jubilee area to be up to 4.5 billion barrels. This is equivalent to just one of Angola's deep water oil blocks. Compared to Angola's five or more estimated deep water blocks of this size, Ghana's potential petroleum endowment is modest.

The training considered different models for state participation in the oil and gas sector, using several case studies. The MPs discussed what type of national oil company is best for Ghana based on a framework of potential choices. The points of greatest contention were whether an NOC should have regulatory responsibility; whether it should have a narrow commercial mission or have broader development goals; and how much risk it would be expected to take (i.e. will it pay for exploration?).

The session on regulation included a five-point checklist for effectiveness: clear policies; enabling laws; enacting regulations; effective license agreements; and competent regulatory agencies. One major concern for Ghana is that the essential regulatory components are either weak or not yet in place. In particular the MPs present were not aware of details of National Development Agenda, or the role of the oil and gas sector in it. These plans must be communicated by the government at the earliest opportunity.

All the MPs present were eager to enable Ghanaians to capture as large a portion as possible of capital and operating spending by the oil companies. The government's National Energy policy has an ambitious provision to ensure local staffing and the use of Ghanaian goods and services that seems to be aiming for 80% of such Ghanaian "local content" and a minimum 5% equity interests in offshore licenses for Ghanaian-owned companies as a means of adding value and expertise to the local sector by building its capacity, knowledge and technology. However, the local content targets are high-reaching given the current absence of competent contracting companies located in Ghana and limited supply of suitably skilled workers. The oil and gas sector is not labor-intensive, and even if Ghana achieved a similar level of local content as the UK it would generate only around 7,000 jobs.2 Expectations for job generation need to be managed. Case studies from Trinidad emphasised the need to focus on the areas of the supply chain where Ghanaian companies could have an advantage and where skills could also be transferred to other sectors.

The challenges of effective revenue management were covered on the final day of the training. Petroleum revenues differ from general tax revenue in that they arise from a non-renewable resource. This led to the discussion of the purpose and use of stabilization funds to manage volatility, and saving funds to provide for future generations, including illustrative examples from Norway, Chile and Botswana. Most of the MPs present said they would choose to spend the majority of the revenues and save the remainder. The final session considered the importance and the challenges of full revenue transparency as demonstrated by Ghana's experience to date with the Extractive Industry Transparency Initiative (EITI). Ghana is an EITI candidate country and needs to proceed with international validation of its program before it becomes EITI compliant—a step that is expected to be completed before March of this year. It also was faced with the decisions of whether to extend EITI to the petroleum sector and to enshrine the initiative into law, as the multi-stakeholder group had recommended. Both recommendations were accepted and there is now a road map in place to expand the steering committee and initiate the legislative processes.

As an outsider, it was fascinating to witness Ghana's political dynamics through the interaction among the parliamentarians, many of whom were former senior ministers. After three days of intense work with them, I was still struggling to say who was with which party, as there was little obvious philosophical difference and lots of laughter and good natured banter. I wondered if, because of the lack of ideological or policy differences, Ghanaian politics is especially personal and divides more on ethnic lines outside the urban centers. "We deny it but that is the truth," one MP told me.

What remains troubling is the apparent lack of a long-term development vision in Ghana, or clarity as to the role of oil and gas wealth in achieving that vision. A national consensus on these questions is the essential foundation for good governance. But I have no doubt that a consensus could be reached with a focus on the future, an open dialogue and a setting aside of the sins of the past.

The change of government has delayed the new oil policy and legislation, which has still to be presented to Parliament. The entire board and the CEO of the national oil company have been replaced: hardly a situation conducive to consistent direction.

Our training has undoubtedly better prepared the MPs for their legislative and oversight role for the oil and gas sector. However, the clock is ticking and there is much work to do if the necessary policies, legislation, regulation and competent regulatory institutions are to be in place before oil production begins in late 2010.

2Based on UK oil and gas related employment of 170 jobs per million barrels per annum production (Myers 2006).