Why Extractive Industry Gender Advocates Should Ask For Contract Transparency

How does the legal framework contribute to gender equity in the extractive sector? This was a driving question for joint research by NRGI and the World Resources Institute (WRI), leading to the publication of Gender and Extractive Governance: Lessons from Existing Legal and Policy Frameworks.

That research revealed that governments are influencing women’s involvement in the extractive industries and the benefits they receive—in both positive and negative ways—through provisions in their national laws, regulations, policies and guidelines. In this blog, I build on that important work by showing that governments and companies are also writing gender provisions into the contracts they agree with each other.

This is yet another reason why extractive industry contracts must be made public. With U.S. President Biden’s Summit for Democracy and the 2021 OGP Summit not far off, government reformers and their civil society counterparts should know that a commitment to resource contracts transparency can support gender goals in addition to improved governance of the extractive industries.

What are extractive industry contracts?

In most countries, when governments decide to develop publicly held natural resources, they usually make agreements with extractive industry companies with the expertise (and access to finance) needed to take resources out of the ground. These agreements are critical parts of the legal framework. They detail the specific rights granted to companies to exploit or explore for natural resources, and state how the financial gains from these activities are shared between the private sector on the one hand, and the government and citizens on the other. In addition, resource contracts often include health and safety requirements, environmental commitments and social obligations. As shown here, some contracts also include gender provisions.

To explore the ways that governments and companies are using resource contracts to make rules on gender related issues, I searched for the words “gender”, “women” and “sex” on ResourceContracts.org—the world’s largest repository of publicly available oil, gas, and mining contracts.

The search returned over 200 documents with at least one of the search terms (roughly 10 percent of all the documents in the repository). While more research would be required to determine exactly how many of these actually point to gender equity provisions rather than mere incidental uses of the search terms, I was able to find at least four different types of clauses that sought to address gender issues. These covered: inclusion in consultation activities; protection from workplace discrimination; fairness in local content policies; and gender in site security. Examples of typical clauses for each of these general areas are provided in the table below.

There is some debate on whether using contracts to lay out obligations on issues like gender is a good idea. On the one hand, contract negotiation processes provide governments and companies an important opportunity to fill in gaps where legislation is insufficiently detailed; or to make rules for unusual oil, gas and mining projects that might not have been foreseen by existing laws (often the case after a big find). Given the pace of most legislative processes, and the wide-ranging interests of many legislators, contract negotiation processes can be faster and more reliable ways to lay down rules for specific issues.

On the other hand, excessive rulemaking by contract can undermine the role that the legislature and other democratic institutions play in the development and oversight of the law. In many instances, this accountability deficit is compounded because, unlike other parts of the legal framework, it is relatively common for resource contracts to be kept secret. As a consequence, citizens affected by contractual provisions—in this case women—may not be aware of rights or protections they are entitled to. Moreover, in instances where contractual terms are ineffective or negatively impact women, secrecy makes it hard to detect shortcomings, let alone work to address them. 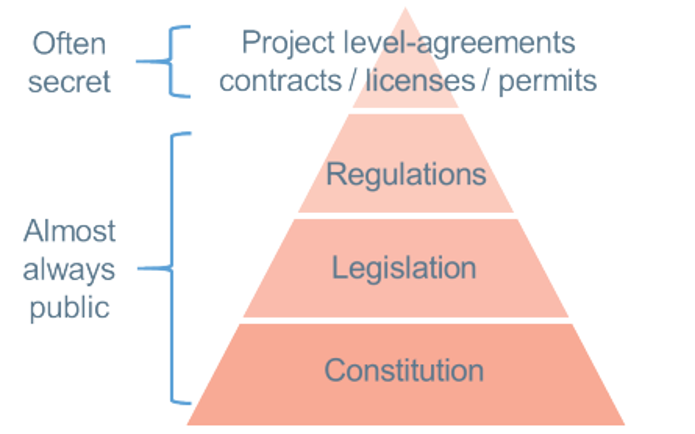 Secrecy in the legal framework

Gender advocates should be asking for contracts

The movement for contract transparency in the extractive industries, most recently anchored by the global Publish What You Pay movement’s #DiscloseTheDeal campaign, has made significant gains. In 2019, EITI made it a requirement for the 50+ countries implementing the EITI Standard to disclose all contracts or licenses granted, entered into or amended from 1 January 2021. There are now 49 countries that have officially disclosed at least one extractive industry contract and 31 with policies in place making publication mandatory.

But, despite these advances, there is still a long way to go. In many jurisdictions, including Egypt, Indonesia and Nigeria, the publication of resource contracts happens only rarely, if at all. In many more, disclosures are partial or incomplete. In these countries, it is impossible to know whether gender provisions are hidden in contracts, let alone determine whether they need to be changed or better enforced. This is why gender reformers should team up with their colleagues working on extractives transparency to advocate for contract disclosures.

This work was presented as part of a workshop session on Gender in extractive sector legal and policy frameworks that was conducted as part of the EITI global peer-learning event EITI & Gender: Towards a more equitable future in May 2021.

An Opportunity to Walk the Talk: Making Gender Disclosure Part of the EITI Standard