Assessing Mineral Licensing in a Decentralized Context: The Case of Indonesia 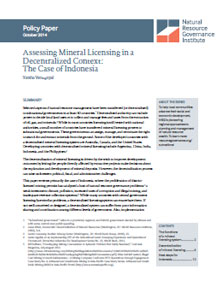 Author
Varsha Venugopal
Download
Assessing Mineral Licensing in a Decentralized Context: The Case of Indonesia (PDF 1.33 MB)
Topics
Licensing and negotiation, Revenue sharing, Subnational governance
Countries
Indonesia
Stakeholders
Civil society actors, Government officials
Precepts
P3 P5 P7 What are Natural Resource Charter precepts?
Social Sharing
Selected aspects of natural resource management have been transferred (or decentralized) to subnational governments in at least 60 countries. Decentralized authority can include power to decide local land uses or to collect and manage fees and taxes from the extraction of oil, gas, and minerals. While in most countries licensing is still vested with national authorities, a small number of countries have transferred mineral licensing powers to subnational governments. These governments can assign, manage, and terminate the right to search for and extract minerals from the ground. Some of the developed countries with a decentralized mineral licensing system are Australia, Canada, and the United States. Developing countries with decentralized mineral licensing include Argentina, China, India, Indonesia, and the Philippines.

This paper reviews primarily the case of Indonesia, where the proliferation of district-licensed mining permits has catalyzed a host of natural resource governance problems: a weak investment climate, pollution, increased rates of corruption and illegal mining, and inadequate revenue collection systems. While many countries with central government licensing face similar problems, a decentralized licensing system can exacerbate them. If not well conceived or designed, a decentralized system can suffer from poor information sharing and coordination among different levels of government. Also, implementation and enforcement of licensing rules may be severely undermined by weak capacities of subnational governments or a lack of mechanisms that keep governments accountable to citizens.

Can We Reverse the Resource Curse at the Local Level in Indonesia?

It Takes a Village: Routes to Local-Level Extractives Transparency