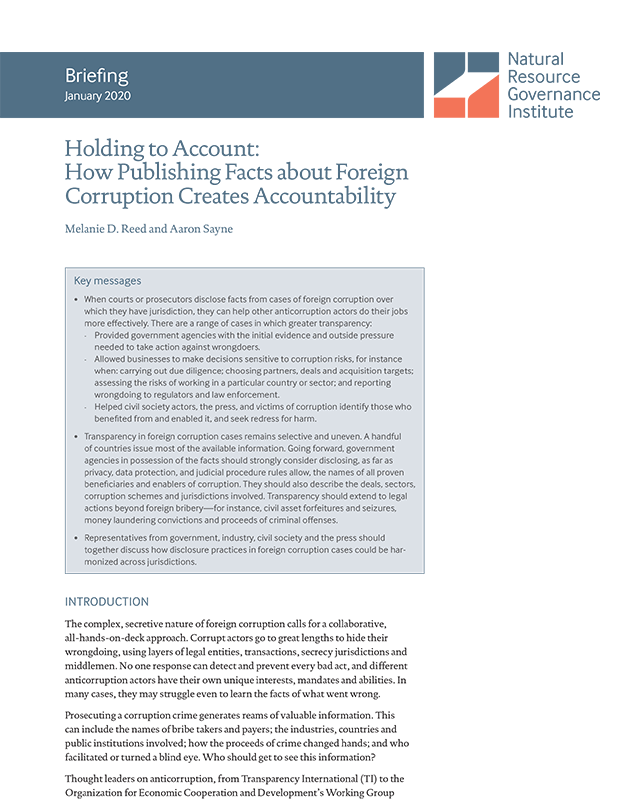 Author
Aaron SayneMelanie D. Reed
Download
Holding to Account: How Publishing Facts about Foreign Corruption Creates Accountability (PDF 215.58 KB)
Topics
Corruption
Social Sharing
The complex, secretive nature of foreign corruption calls for a collaborative, all-hands-on-deck approach. Corrupt actors go to great lengths to hide their wrongdoing, using layers of legal entities, transactions, secrecy jurisdictions and middlemen. No one response can detect and prevent every bad act, and different anticorruption actors have their own unique interests, mandates and abilities. In many cases, they may struggle even to learn the facts of what went wrong. Prosecuting a corruption crime generates reams of valuable information. This can include the names of bribe takers and payers; the industries, countries and public institutions involved; how the proceeds of crime changed hands; and who facilitated or turned a blind eye. Who should get to see this information?

Thought leaders on anticorruption, from Transparency International (TI) to the Organization for Economic Cooperation and Development’s Working Group on Bribery (OECD WGB), have long endorsed greater transparency in foreign corruption cases. They argue, for example, that access to information raises awareness, gives guidance to anticorruption practitioners, encourages cooperation with prosecutors and boosts confidence in law enforcement. Conversely, opacity in corruption cases can weaken the deterrent value of prosecutions, open doors for prosecutorial misconduct and thwart efforts to make victims whole. These concerns are particularly keen in cases that settle via tools like deferred prosecution agreements (DPAs) or plea bargains.
Many governments share evidence from corruption cases confidentially, through formal legal instruments and close working relationships. But how does public disclosure of facts from corruption cases, whether by courts or other law enforcement bodies, aid the broader fight against corruption? Put differently: At a time when enforcement of anticorruption laws remains low in many countries, could more transparency help anticorruption efforts by regulators, companies, the media, civil society and others?
To answer this question, the authors of this briefing analyzed materials from foreign corruption cases that have arisen since the inception of laws banning foreign bribery. During the past four years, they also conducted over two dozen interviews with experts government, the private sector, civil society and the press. From this work, they found instances in which other anticorruption actors used published facts from court cases to do their jobs more effectively. Although they undertook this research as part of the Natural Resource Governance Institute’s (NRGI’s) programming aimed at reducing corruption risks in the oil, gas and mining sectors, they did not limit themselves to cases in the extractive industries. Accordingly, their findings and recommendations apply broadly to corruption in other sectors.