How Can Ugandans Benefit from an Oil Windfall? Policy Options to Manage Petroleum Revenues 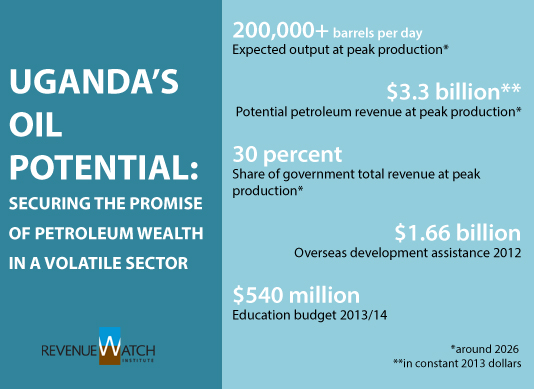 Uganda is on the path to becoming a significant oil producer in the next decade, with production potentially reaching over 200,000 barrels per day. Under the right economic and fiscal conditions, such a level of production would generate substantial public revenue that could catalyze economic growth through public investments in infrastructure, education and other social services. However, due to volatile oil prices and the cyclical nature of the oil market, the true amount collected in any given year is subject to wide variation and is generally unpredictable. Furthermore, as international experience has shown, mechanisms to shield public expenditure from unexpected drops in oil revenue and protect these revenues from mismanagement are necessary if Uganda is to fully benefit from oil production.

As Ugandan parliamentarians consider passing a public finance bill that contains key provisions for the management of revenues from hydrocarbons via a natural resource fund, RWI-NRC economic analysts Thomas Lassourd and Andrew Bauer stress-tested a number of possible scenarios of saving/spending fiscal rules on an economic model of the Ugandan economy to see which rule would best meet the government’s objectives, as specified in the 2012 Oil and Gas Revenue Management Policy. (See RWI-NRC’s analysis of the bill and a recent blog post on Uganda’s oil revenue management and fiscal rules.) The following report presents the detailed economic analysis, key recommendations regarding the choice of a fiscal rule to include in the public finance bill, and suggested oversight and accountability mechanisms for a strong fiscal framework for petroleum revenue management.