NRGI Impact: Mining Revenues Flow to Provinces and Communities in the DRC 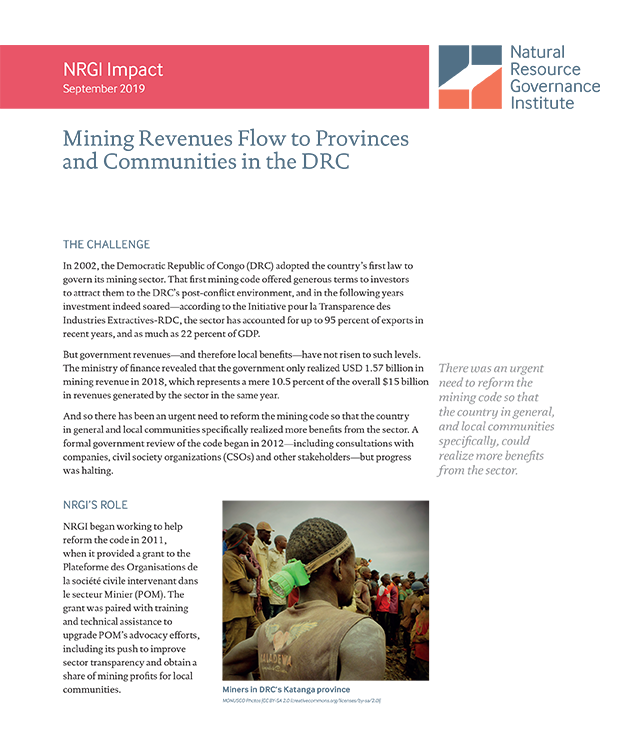 
In 2002, the Democratic Republic of Congo (DRC) adopted a mining code offering generous terms to investors to attract them to the country’s post-conflict environment. Investment indeed soared, but government revenues and local benefits did not—there was an urgent need to reform the code to decrease this disparity.
In 2011, NRGI provided a grant to the civil society organization POM to reform the code. POM then led advocacy to add a mechanism mandating that a fixed percentage of mining companies’ revenues go directly to subnational governments and local communities. POM also successfully pushed for a community development fund.
Parliament passed revisions in March 2018. The regulation was published in June 2019, and companies have begun payments to communities. The provincial governments of Haut-Katanga and Lualaba are projected to receive between USD 75 million and 225 million in annual revenue, while local communities will receive between 45 million and 157 million. Every province has received some money already. The sector head in Luilu said “With the first collections of our part of the mining royalty, we have already built some community facilities: a pediatric and a maternity ward at the Luilu Health Center, but also a well-equipped mortuary.”
Many communities still lack capacity to receive transfers, while others don’t have the infrastructure to ensure the money benefits citizens. NRGI is measuring the impact of transfers on communities and facilitating a manual to help communities budget, develop capacity and develop revenue management standards.

Subnational Revenue Sharing in the DRC after Découpage: Four Recommendations for Better Governance