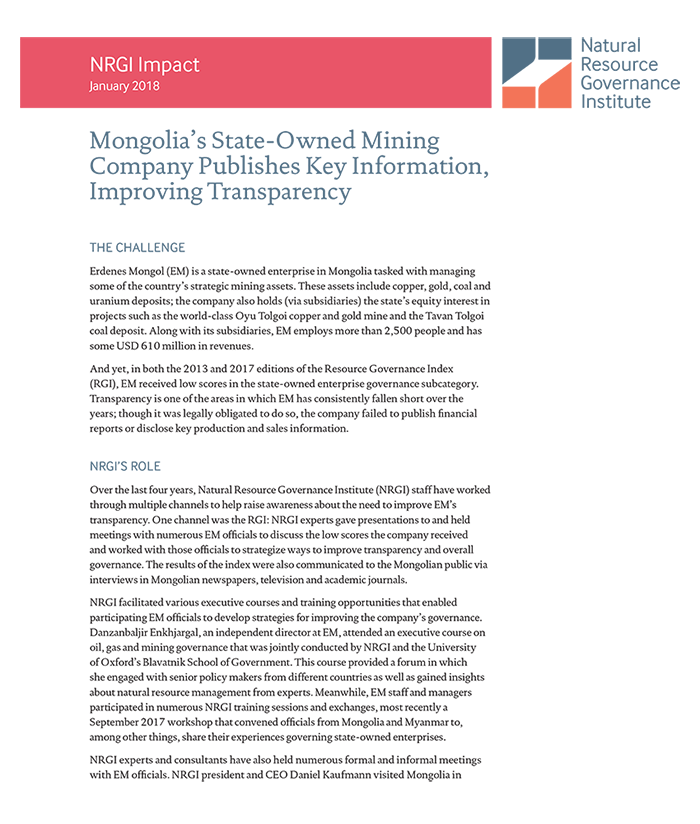 Erdenes Mongol (EM) is a state-owned enterprise in Mongolia tasked with managing some of the country’s strategic mining assets. These assets include copper, gold, coal and uranium deposits; the company also holds (via subsidiaries) the state’s equity interest in projects such as the world-class Oyu Tolgoi copper and gold mine and the Tavan Tolgoi coal deposit. Along with its subsidiaries, EM employs more than 2,500 people and has some USD 610 million in revenues.

And yet, in both the 2013 and 2017 editions of the Resource Governance Index (RGI), EM received low scores in the state-owned enterprise governance subcategory. Transparency is one of the areas in which EM has consistently fallen short over the years; though it was legally obligated to do so, the company failed to publish financial reports or disclose key production and sales information.

Over the last four years, Natural Resource Governance Institute (NRGI) staff have worked through multiple channels to help raise awareness about the need to improve EM’s transparency. One channel was the RGI: NRGI experts gave presentations to and held meetings with numerous EM officials to discuss the low scores the company received and worked with those officials to strategize ways to improve transparency and overall governance. The results of the index were also communicated to the Mongolian public via interviews in Mongolian newspapers, television and academic journals.

NRGI facilitated various executive courses and training opportunities that enabled participating EM officials to develop strategies for improving the company’s governance. Danzanbaljir Enkhjargal, an independent director at EM, attended an executive course on oil, gas and mining governance that was jointly conducted by NRGI and the University of Oxford’s Blavatnik School of Government. This course provided a forum in which she engaged with senior policy makers from different countries as well as gained insights about natural resource management from experts. Meanwhile, EM staff and managers participated in numerous NRGI training sessions and exchanges, most recently a September 2017 workshop that convened officials from Mongolia and Myanmar to, among other things, share their experiences governing state-owned enterprises.

NRGI experts and consultants have also held numerous formal and informal meetings with EM officials. NRGI president and CEO Daniel Kaufmann visited Mongolia in March 2016 and met with the former CEO of EM over governance challenges for the company, especially regarding transparency; NRGI also held a meeting in 2017 with the current CEO, Tsevegmid Tumentsogt, to continue discussing ways to improve the company’s governance.

NRGI’s engagement was just one piece of a large and longstanding campaign to improve EM’s governance. Other important actors included interested stakeholders in Mongolian civil society (such as OSF Mongolia) and international bodies such as the Asian Development Bank.

Pursuant to the business plan for 2017, Erdenes Mongol LLC has approved a plan to improve the company’s performance, as measured by the Resource Governance Index, by reviewing proposals, recommendations, research, international standardsand best practices pertaining to good corporate governance, and by establishinga working group led by the head of the Audit Committee of the Board of Directors.Based on the results of the index review, the company has planned to take measuresto ensure transparency and improve its operations and internal controls. [“Corporate Governance”, Paragraph 3]

The report revealed important information such as the company’s financial performance for the first half of 2017; the composition of EM’s board, executive teams and subsidiaries; business plans; and information about the sales revenues and ongoing projects of EM’s five main subsidiary companies. The report clarified that the company’s main income for the covered period has been from a toll road used for exporting coal, and it also described the company’s new business ventures. EM is in the process of approving a disclosure policy prepared by the “committee on transparency”, headed by Ms. Enkhjargal, which the company established in response to the 2017 RGI findings. EM is also in the process of approving a professional code of conduct.