Mongolia: Updated Assessment of the Impact of the Coronavirus Pandemic on the Extractive Sector and Resource Governance

Mongolia’s economy is likely to suffer significantly due to the coronavirus pandemic and associated movement restrictions. In the first half of 2020, its gross domestic product (GDP) shrank by 9.7 percent. In the first eight months of 2020, exports and imports declined by 16.9 percent and 15.6 percent respectively, compared with the same period in 2019. Mining sector output also declined by 25.5 percent. The other sector that has contracted significantly is transportation, which is strongly linked to the mining sector. In September, the Asian Development Bank (ADB) further reduced its 2020 growth forecasts for Mongolia, from a predicted 2.1 percent in April down to -2.6 percent. 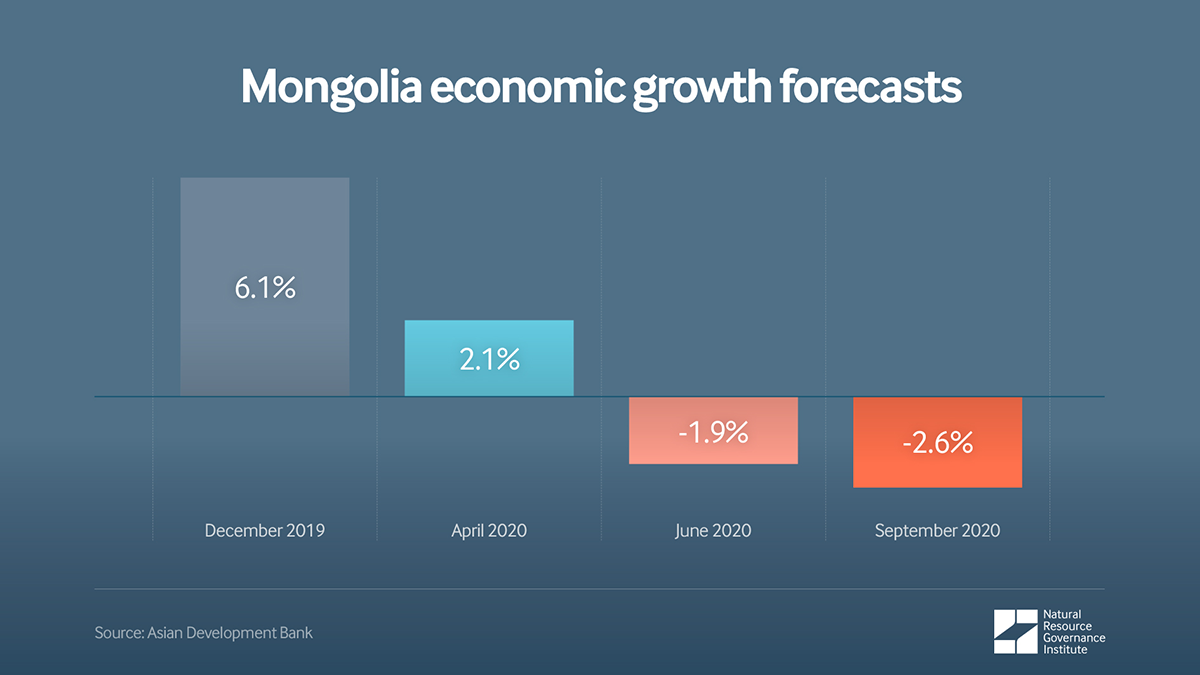 Mongolia has limited capacity to cope with economic shocks. The country is highly indebted, with government debt standing at around 70 percent of GDP. Moreover, Mongolia is entering a period that requires significant repayment of its bonds. One of the most serious concerns was a swap agreement between the central banks of China and Mongolia, which was scheduled to end in 2020. In August, the Bank of Mongolia announced that the currency swap agreement of CNY 15 billion (effectively a USD 2.2 billion loan) was extended to 2023. In October, Mongolia announced it borrowed another USD 600 million in sovereign debt, Nomad Bonds, at about 5.1 percent interest, which would be used to refinance some of the expiring debt.

Mongolia has received loans and grants from the World Bank* and ADB** to support its response to the pandemic. The World Bank has been working closely with the government to address various challenges brought by the pandemic and provided financial support in response to it. The coronavirus crisis has reinforced concerns about Mongolia’s excessive dependence on China and mineral exports. In terms of trade, China accounted for 89 percent of exports and 33 percent of imports in 2019. China is the main buyer of Mongolia’s raw commodities, with refineries and smelters located on the Chinese side of the border. China also provides electricity to Mongolia’s key mining project, Oyu Tolgoi, as Mongolia continues to struggle with providing a local power supply for projects in the Gobi Desert mining region. The coronavirus situation has normalized in China to a certain degree, providing a critical boost for Mongolia’s coal shipments and economy. Any new reduction in exports, coupled with the government’s fiscal stimulus, could put significant pressure on the balance of payments, and the USD 3.6 billion in foreign reserves may quickly dissipate as the central bank tries to keep the Mongolian tugrik afloat. In late August, the parliament amended the budget for 2020, as the fiscal deficit ballooned to around USD 1.4 billion, adding to debt pressures. 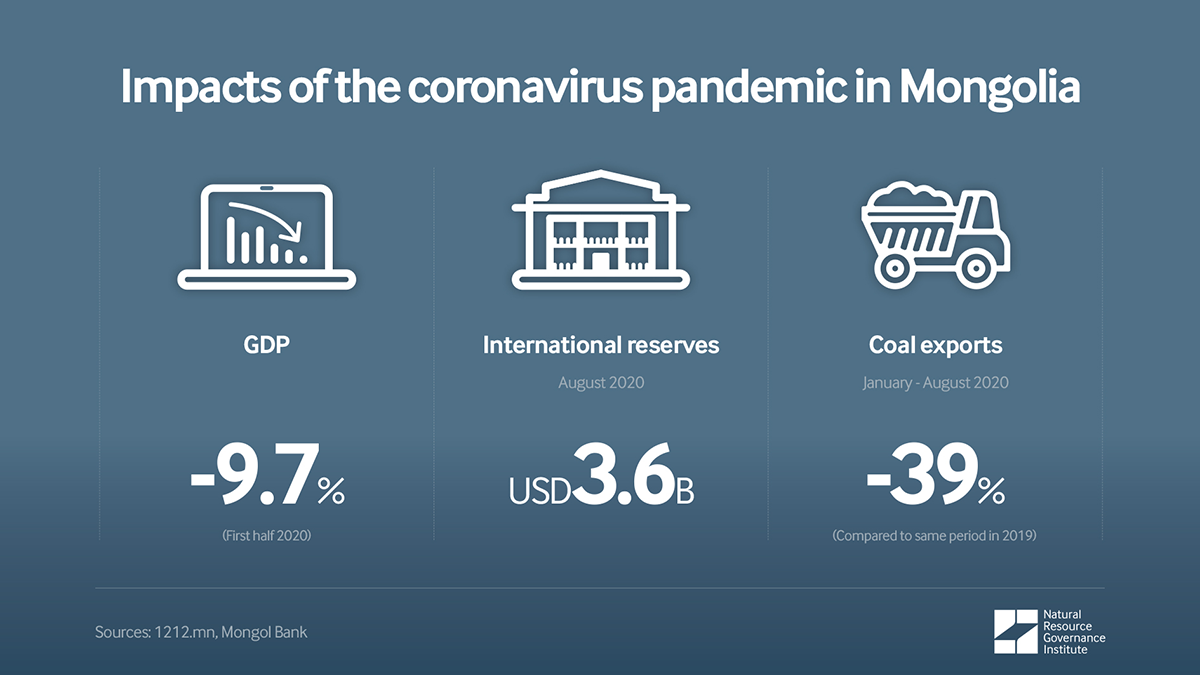 Mongolia produces only a small amount of crude oil (6 to 8 million barrels per year) and exports this oil to China. The exports of crude oil have already suffered significantly due to border restrictions and have not improved much. In the first eight months of 2020, Mongolia exported only 1.83 million barrels of oil, a decline of more than 50 percent compared to the same period in 2019.

Mongolia’s mineral exports dropped 30 percent in the first eight months of 2020 compared with the same period in 2019. The key export products are coal and copper concentrate. As Mongolia closed its borders relatively early in the coronavirus pandemic (at the end of January 2020), the country experienced a trade shock quite early compared to many other countries.

Coal prices have remained stable. The main reason for the decline in exports was the closure of borders with China in the first quarter of the year. Although borders have reopened (the Mongolian government lifted its temporary suspension of all shipments of coal on 23 March), stricter health-related requirements for truck drivers have continued to affect exports. By mid-July, shipments of coal to China reached close to pre-pandemic levels. However, total coal exports, of the first eight months of 2020, is down by almost 40 percent, compared to the same period for 2019.

The governments of both Mongolia and China have been determined to ensure no interruptions to the exports of copper concentrate from Mongolia. Therefore, key copper concentrate production and export by Oyu Tolgoi and Erdenet have not suffered much (although the price of copper dropped over the first four months of 2020). Difficulties linked to bringing in foreign engineers and managers who play key construction roles have delayed progress on the long-awaited underground development of Oyu Tolgoi mine.

Truck drivers who are transporting coal and copper to China are subject to testing at the border, and if they test positive for coronavirus, they are subject to quarantine. The country may close its borders again if there is a spike in coronavirus cases. This means there are still risks of significantly slower transportation turnover, adding to the costs of Mongolian exports of copper concentrate and coal.

The pandemic’s impact on gold extraction may be positive as gold prices have increased, and the government prioritizes this sector. It is important, however, that environmental standards and government revenue are not jeopardized. Most of the gold produced is purchased by Mongolbank, which sends the purchases for refining, using the gold to either boost foreign reserves or to trade in the open market. Gold produced by Oyu Tolgoi is sold to smelters in China, within the copper concentrate. The amount of gold sold to Mongolbank increased substantially in 2020 compared with the previous year. The chief economist of Mongolia’s central bank stated that this may be related to either the price hike during the pandemic or the border closures, which made the illegal exodus of gold almost impossible, or both.

Overall, plans for new investments in mining and infrastructure projects are likely to suffer if the situation does not improve significantly. Mongolia may have to postpone some extractive-linked projects such as renovating the truck hauling road connecting the Tavan Tolgoi and Oyu Tolgoi mines to the Chinese border, or railways from Tavan Tolgoi to the Chinese border. A prolonged downturn in investments might lead to changes in policies on attracting investors and reduce the bargaining power of the government, potentially reducing Mongolia’s revenues and benefits from new investments. The government may also be tempted to increase state ownership of mining companies.

On 3 September 2020, the government and Oyu Tolgoi signed a power purchase agreement. The government plans to invest in a coal-fueled power plant around the Tavan Tolgoi coal mine area, which would feed key mining projects, including Oyu Tolgoi. The estimated cost of the project is around $500 to $600 million. Whether the government can raise these funds at a time when many funders are moving away from coal remains doubtful. As of today, Oyu Tolgoi spends USD 150 to 200 million annually on electricity from China.

Impact on revenues from the extractive sector

Mining revenues have recently constituted around 25 percent of government revenues. The slowdown in demand and subsequent dip in exports due to the coronavirus pandemic may lead to a significant shortfall in revenues for the government. The country is highly dependent on exports of minerals, largely to a single market (China), as noted above. Revenue from oil exports is lower, but the reduction in exports and prices will add to the government’s revenue shortfall.

Mongolia is a member of the Extractive Industries Transparency Initiative (EITI), a global good governance standard for oil, gas and minerals. Formal EITI reporting processes have seen some delays due, amongst other things, to difficulties with setting up in-person meetings. This may lead to slowing down reforms planned under EITI and beyond. Such reforms include: creating a legal base and procedures beneficial ownership disclosure, state-owned enterprises disclosures, and ensuring public consultation and participation.

Parliament has recently adopted the Law on Preventing and Combatting the Coronavirus Contagion Pandemic (COVID-19) and Mitigating Negative Social and Economic Impacts. The legislation may affect civil society’s ability to operate freely. For instance, the law suggests monitoring and limiting media and social networks and obliging individuals and organizations to disclose to the authorities any information they may hold. It also suspends the normal budget procedures for economic measures by the government, and leaves it to courts for any dispute resolution, which may be time-consuming and costly for civil society or individuals.

Mongolia held its parliamentary elections on 24 June 2020. The incumbent ruling party, Mongolian People’s Republic Party, gained most seats and its leader was re-elected for a second four-year term as prime minister. He will continue his previous government’s agenda on extractive governance issues, including plans to pass a law on Mongolia’s sovereign wealth fund.

Mongolia’s high level of indebtedness, the large fiscal stimulus package announced by the government, and the remaining uncertainty about sustainable exports of coal and copper to China due to the coronavirus pandemic, require the government to review the sustainability of its fiscal position more carefully.

Returning to compliance with fiscal rules and tightening control over large capital expenditures, especially those of extractive projects and state-owned enterprises (SOEs), will be important. Good management of mining revenues remains fundamental, including increasing transparency around the role of SOEs in revenue management. More robust transparency and better oversight of major extractive-related projects, including addressing corruption risks, are also essential.

* The World Bank provided $26.9 million from its COVID-19 emergency fund (grant) to implement a project on health sector support. It also allocated $2.2 million to purchase medical and diagnostic equipment from the Digital Healthcare project and reallocated $750 thousand from the Governance Strengthening Project to COVID-19 mitigation (funded by the European Union). It reprioritizes $15 million under the Employment Support Project to support the government’s economic stimulus package in response to COVID-19. Mongolia Emergency Relief and Employment Support project is financed with $20 million to provide temporary relief to employers. $5 million has been mobilized on children’s health and nutrition under the Education quality reform project. A $1 million grant was provided from the Pandemic Emergency Financing Facility.

Dorjdari Namkhaijantsan is the Mongolia manager at the Natural Resource Governance Institute (NRGI).