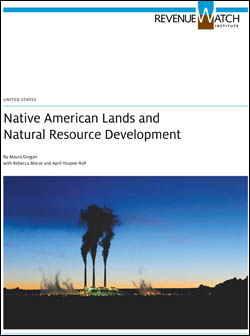 The rules that govern oil, gas and mining on American Indian tribal lands are complex, and the tribes that seek economic development through natural resources face a range of challenges. In this report, Revenue Watch gives an overview of the issues and describes current approaches to natural resource management. The report also highlights the growing and critical role of tribal oversight and participation in efforts to secure the proper benefits of these resources for tribes and their members.

American Indian lands are estimated to include nearly 30 percent of the nation’s coal reserves west of the Mississippi, as much as 50 percent of potential uranium reserves, and up to 20 percent of known natural gas and oil reserves. These lands also may contain rare earth minerals, increasingly sought after for use in manufacturing.

Although several tribes already have sufficient expertise to oversee mining and oil and gas production on their lands, most remain reliant on the U.S. government for support. Despite recent legislation offering tribes greater decision-making authority over natural resources, barriers to Indian economic development—including minerals development—remain formidable.

Only recently have tribes had opportunities to decide how to develop these resources in line with their development priorities. Many feel that the appropriate role for the federal government today is as a resource-provider, facilitating independent decision-making and true self-governance by tribes. When tribes are free to make decisions for themselves, they have the opportunity to align policy and planning with tribal priorities.