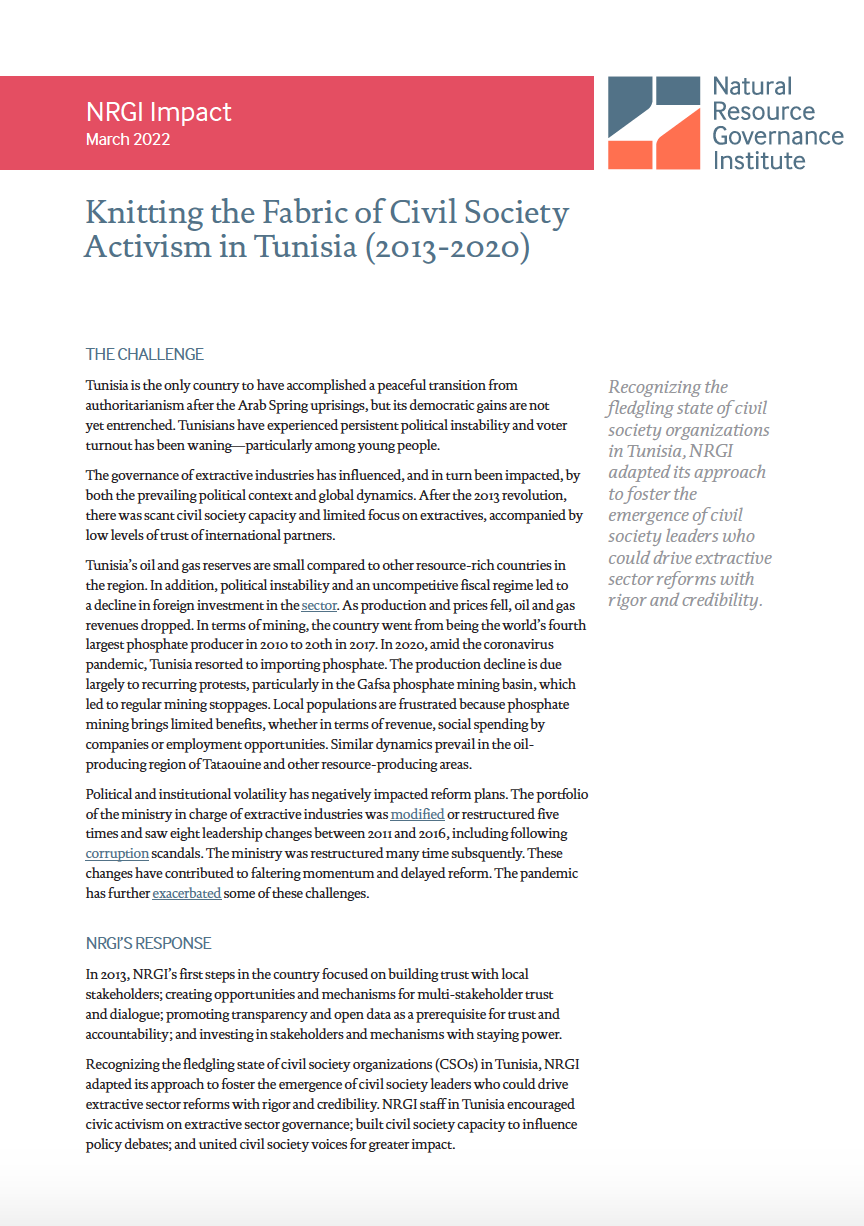 Tunisia is the only country to have accomplished a peaceful transition from authoritarianism after the Arab Spring uprisings, but its democratic gains are not yet entrenched. Tunisians have experienced persistent political instability and voter turnout has been waning—particularly among young people.

The governance of extractive industries has influenced, and in turn been impacted, by both the prevailing political context and global dynamics. After the 2013 revolution, there was scant civil society capacity and limited focus on extractives, accompanied by low levels of trust of international partners.

Tunisia’s oil and gas reserves are small compared to other resource-rich countries in the region. In addition, political instability and an uncompetitive fiscal regime led to a decline in foreign investment in the sector. As production and prices fell, oil and gas revenues dropped. In terms of mining, the country went from being the world’s fourth largest phosphate producer in 2010 to 20th in 2017. In 2020, amid the coronavirus pandemic, Tunisia resorted to importing phosphate. The production decline is due largely to recurring protests, particularly in the Gafsa phosphate mining basin, which led to regular mining stoppages. Local populations are frustrated because phosphate mining brings limited benefits, whether in terms of revenue, social spending by companies or employment opportunities. Similar dynamics prevail in the oilproducing region of Tataouine and other resource-producing areas.

Political and institutional volatility has negatively impacted reform plans. The portfolio of the ministry in charge of extractive industries was modified or restructured five times and saw eight leadership changes between 2011 and 2016, including following corruption scandals. The ministry was restructured many time subsquently. These changes have contributed to faltering momentum and delayed reform. The pandemic has further exacerbated some of these challenges. NRGI has also supported multi-stakeholder dialogue to advance the publication of contracts and adherence to the Extractive Industries Transparency Initiative (EITI).

NRGI played an important role in supporting civil society, which grew in numbers and strength and achieved significant results in the first years following the revolution. CSOs began to engage on resource governance issues and formed a civil society transparency coalition. Most importantly, NRGI succeeded in building trust with and between stakeholders, raising the general profile of transparency and good governance in the media and among Tunisians. NRGI supported local groups to secure the inclusion of natural resource clauses in the country’s new constitution and leverage the Open Government Partnership and EITI to promote transparency in the extractive sector. In more recent years, NRGI’s work has led to the government releasing mining, oil and gas contracts on a public platform. Civil society research informed public debates and elicited government response. A more representative and self-reliant transparency coalition emerged, and the country’s EITI implementation took off. The government also launched a participatory sector audit.


Photo by Hasan Mrad for Shutterstock.