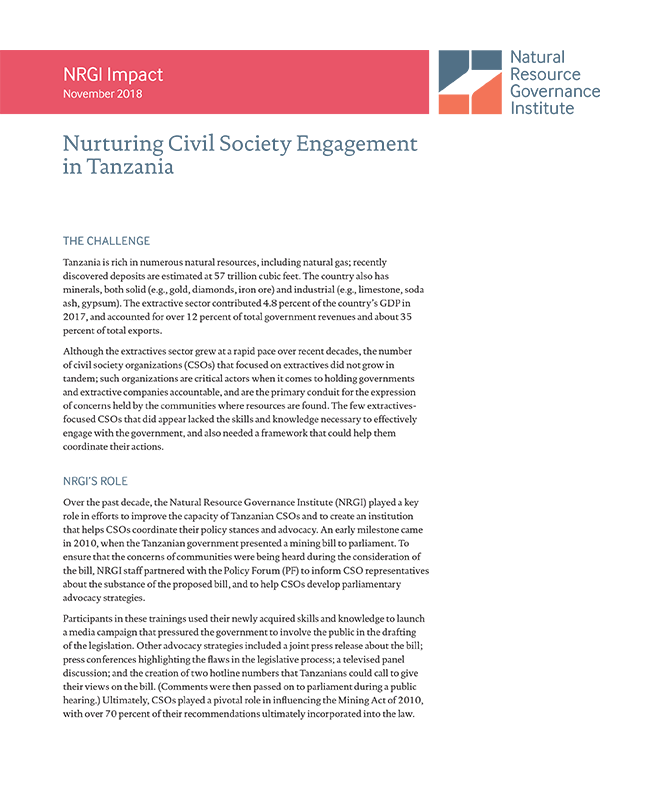 Tanzania is rich in numerous natural resources, including natural gas; recently discovered deposits are estimated at 57 trillion cubic feet. The country also has minerals, both solid (e.g., gold, diamonds, iron ore) and industrial (e.g., limestone, soda ash, gypsum). The extractive sector contributed 4.8 percent of the country’s GDP in 2017, and accounted for over 12 percent of total government revenues and about 35 percent of total exports.

Although the extractives sector grew at a rapid pace over recent decades, the number of civil society organizations (CSOs) that focused on extractives did not grow in tandem; such organizations are critical actors when it comes to holding governments and extractive companies accountable, and are the primary conduit for the expression of concerns held by the communities where resources are found. The few extractives-focused CSOs that did appear lacked the skills and knowledge necessary to effectively engage with the government, and also needed a framework that could help them coordinate their actions.

Over the past decade, the Natural Resource Governance Institute (NRGI) played a key role in efforts to improve the capacity of Tanzanian CSOs and to create an institution that helps CSOs coordinate their policy stances and advocacy. An early milestone came in 2010, when the Tanzanian government presented a mining bill to parliament. To ensure that the concerns of communities were being heard during the consideration of the bill, NRGI staff partnered with the Policy Forum (PF) to inform CSO representatives about the substance of the proposed bill, and to help CSOs develop parliamentary advocacy strategies.

Participants in these trainings used their newly acquired skills and knowledge to launch a media campaign that pressured the government to involve the public in the drafting of the legislation. Other advocacy strategies included a joint press release about the bill; press conferences highlighting the flaws in the legislative process; a televised panel discussion; and the creation of two hotline numbers that Tanzanians could call to give their views on the bill. (Comments were then passed on to parliament during a public hearing.) Ultimately, CSOs played a pivotal role in influencing the Mining Act of 2010, with over 70 percent of their recommendations ultimately incorporated into the law.

Later that same year, a group of CSO representatives convened by NRGI discussed how to leverage their successful advocacy around the mining bill to further consolidate CSO action and maintain influence over the country’s natural resource governance agenda. The group established an online community of practice named the Tanzania Civil Society Platform on Extractives. This community served as a forum for discussion and as an important networking tool. NRGI hosted monthly in-person discussions that allowed CSO staff to interact with each other, and during these discussions the platform members agreed to three mandates: to serve as a joint advocacy platform; to facilitate learning; and to facilitate information-sharing.

Now called Hakirasilimali (Swahili for “resource rights”), the platform has evolved into an important resource for extractives-focused CSOs. In 2015, members of the platform analyzed three important bills—the 2015 Petroleum Law, the 2015 Revenue Management Law, and a bill centering on Tanzania’s entry into the global Extractive Industries Transparency Initiative (EITI)—and presented their analysis to parliament, which incorporated some of the platform’s recommendations and also acknowledged both the quality and objectivity of the platform’s work. In 2017, Hakirasilimali was formally recognized by the government as the main channel through which it engages with CSOs on extractives. Despite the unfortunate fact that “civic space” is shrinking in Tanzania (which has made it more difficult for media and CSOs to publicly express their views), the platform has managed to organize its Annual Conference on Extractives for the past 3 years, attracting over 100 participants from CSOs, media, government, the legislature and the private sector. The conference serves as the primary space in which a variety of stakeholders can openly discuss current governance issues in the extractive sector.

Over 70 CSOs now participate in Hakirasilimali. The platform has diversified its funding sources and is no longer exclusively dependent on NRGI’s financial support, with 2017/18 funding coming from SwissAid, Oxfam, Hivos, the Wellspring Philanthropic Fund and the Foundation for Civil Society.

Launch: Expert Discussion of 'Preventing Tax Base Erosion in Africa'