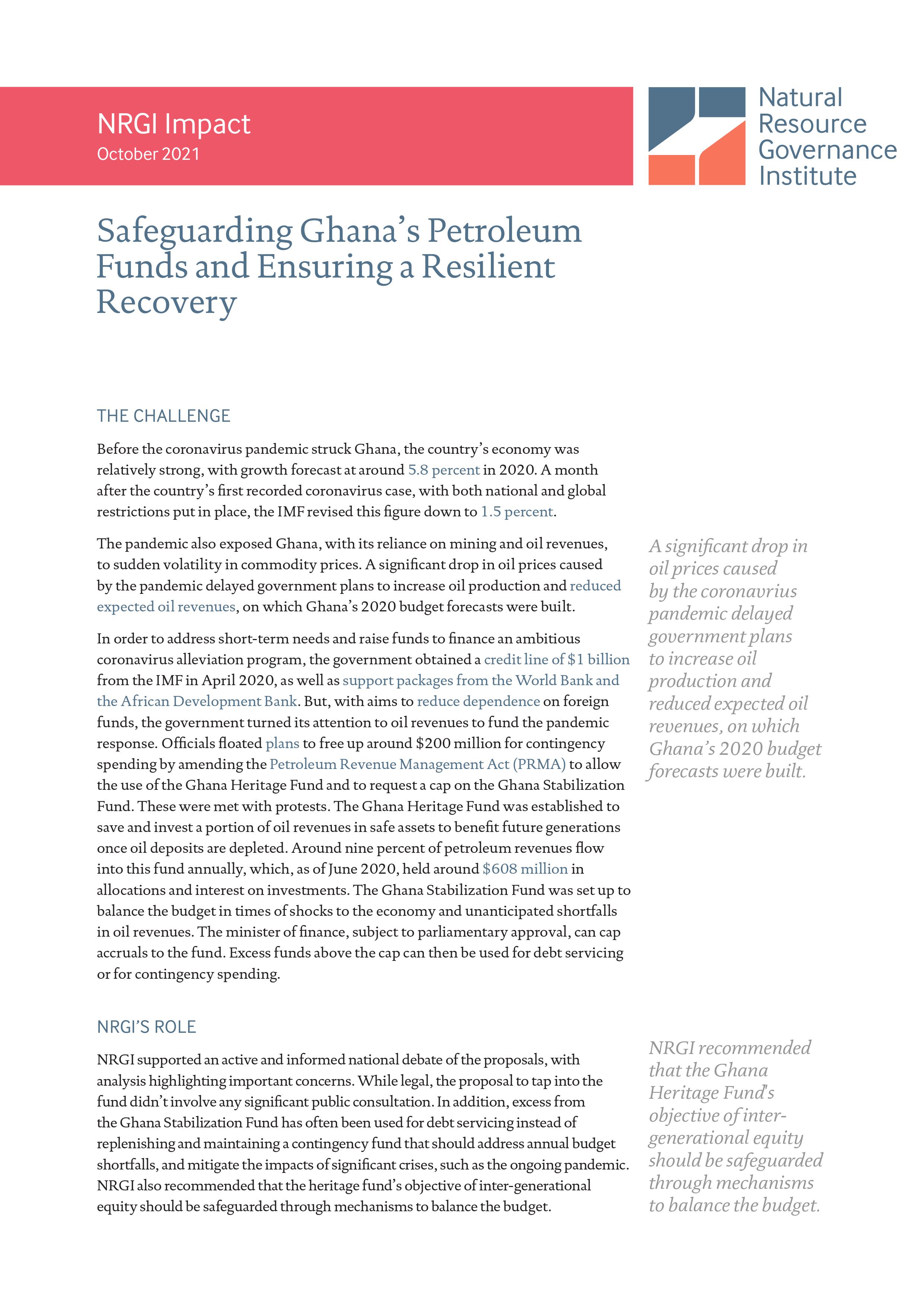 
The challenge
Before the coronavirus pandemic struck Ghana, the country’s economy was relatively strong, with growth forecast at around 5.8 percent in 2020. A month after the country’s first recorded coronavirus case, with both national and global restrictions put in place, the IMF revised this figure down to 1.5 percent.

The pandemic also exposed Ghana, with its reliance on mining and oil revenues, to sudden volatility in commodity prices. A significant drop in oil prices caused by the pandemic delayed government plans to increase oil production and reduced expected oil revenues, on which Ghana’s 2020 budget forecasts were built.
In order to address short-term needs and raise funds to finance an ambitious coronavirus alleviation program, the government obtained a credit line of $1 billion from the IMF in April 2020, as well as support packages from the World Bank and the African Development Bank. But, with aims to reduce dependence on foreign funds, the government turned its attention to oil revenues to fund the pandemic response. Officials floated plans to free up around $200 million for contingency spending by amending the Petroleum Revenue Management Act (PRMA) to allow the use of the Ghana Heritage Fund and to request a cap on the Ghana Stabilization Fund. These were met with protests. The Ghana Heritage Fund was established to save and invest a portion of oil revenues in safe assets to benefit future generations once oil deposits are depleted. Around nine percent of petroleum revenues flow into this fund annually, which, as of June 2020, held around $608 million in allocations and interest on investments. The Ghana Stabilization Fund was set up to balance the budget in times of shocks to the economy and unanticipated shortfalls in oil revenues. The minister of finance, subject to parliamentary approval, can cap accruals to the fund. Excess funds above the cap can then be used for debt servicing or for contingency spending.

NRGI’s role
NRGI supported an active and informed national debate of the proposals, with analysis highlighting important concerns. While legal, the proposal to tap into the fund didn’t involve any significant public consultation. In addition, excess from the Ghana Stabilization Fund has often been used for debt servicing instead of replenishing and maintaining a contingency fund that should address annual budget shortfalls, and mitigate the impacts of significant crises, such as the ongoing pandemic. NRGI also recommended that the heritage fund’s objective of inter-generational equity should be safeguarded through mechanisms to balance the budget.

NRGI supported a range of key interventions with civil society organizations, including the coordination of a united front. NRGI and a broader coalition of civil society and other actors, including the Public Interest Accountability Committee (PIAC), the Africa Centre for Energy Policy (ACEP), Friends of the Nation (FON), the Center for Public Interest Law (CEPIL) and the Civil Society Platform on Oil and Gas (CSPOG), raised concerns over the minister’s plans to draw on the petroleum funds. NRGI, FON and CEPIL, with inputs from the International Budget Partnership and Oxfam Ghana, issued a joint press release following the minister’s
announcement and before a crucial parliamentary vote. Simultaneously, NRGI and its partners coordinated with ACEP, which issued a detailed analysis of key civil society concerns and recommended public debates on the topic to be held. These actions were complemented by advocacy by CSPOG. These efforts resulted in a national and evidence-based debate, keeping the issue from turning into a political quarrel.

Close coordination with PIAC, created through the PRMA in 2011 to oversee compliance with the act, was key for NRGI’s strategy. This built on years of technical administrative and financial support. PIAC’s strength comes from the public and its diverse membership that counts civil society organizations, think tanks, academia, faith-based groups, traditional authorities, media, trade unions, and several professional associations, including the private sector. A PIAC position statement broadly supported and amplified the concerns shared by NRGI and civil society partners.

NRGI’s outreach to media built on established relationships with key reporters. In the years before the pandemic, NRGI had provided over 70 reporters and editors at 10 of Ghana’s leading TV, radio and print outlets with training on extractive sector governance, mentorship and fellowship opportunities. NRGI staff gave radio and TV interviews on the proposals; combined with active media outreach by ACEP and the CSOGP, this work ensured that key messages reached the public and amplified debates, thus increasing pressure on the government to reconsider its plans.

While the government successfully obtained parliamentary approval to lower the cap on the Ghana Stabilization Fund and use $214 million from the contingency fund to finance the coronavirus alleviation program, it decided not to use the Heritage Fund as a result of civil society engagement. The minister of finance also acknowledged the need for “a national dialogue on withdrawal of moneys from the Ghana Heritage Fund.” The issue has since not been raised in national debates again. NRGI and civil society organizations’ quick and united action led to this outcome.