Peru: Initial Assessment of Impact of the Coronavirus Pandemic on the Extractive Sector and Resource Governance 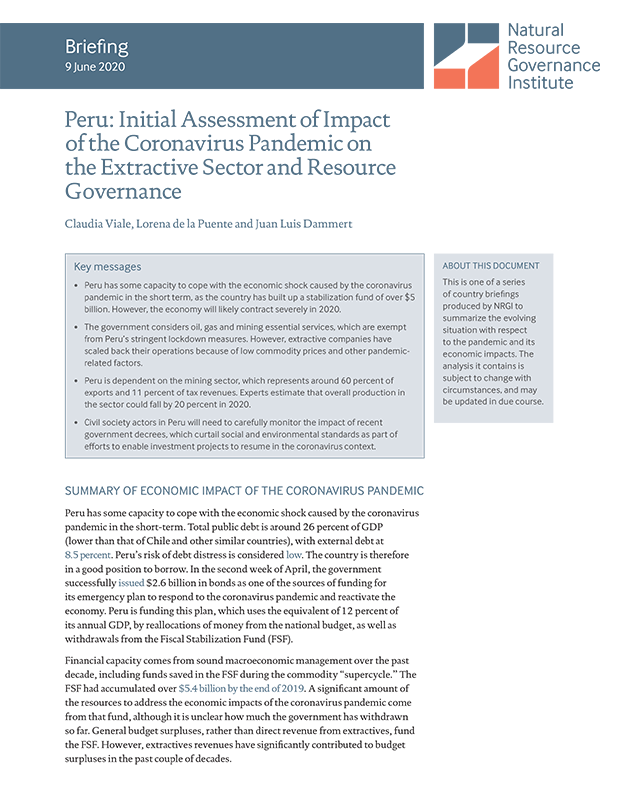 Peru has some capacity to cope with the economic shock caused by the coronavirus pandemic in the short-term. Total public debt is around 26 percent of GDP (lower than that of Chile and other similar countries), with external debt at 8.5 percent. Peru’s risk of debt distress is considered low. The country is therefore in a good position to borrow. In the second week of April, the government successfully issued $2.6 billion in bonds as one of the sources of funding for its emergency plan to respond to the coronavirus pandemic and reactivate the economy. Peru is funding this plan, which uses the equivalent of 12 percent of its annual GDP, by reallocations of money from the national budget, as well as withdrawals from the Fiscal Stabilization Fund (FSF).

Financial capacity comes from sound macroeconomic management over the past decade, including funds saved in the FSF during the commodity “supercycle.” The FSF had accumulated over $5.4 billion by the end of 2019. A significant amount of the resources to address the economic impacts of the coronavirus pandemic come from that fund, although it is unclear how much the government has withdrawn so far. General budget surpluses, rather than direct revenue from extractives, fund the FSF. However, extractives revenues have significantly contributed to budget surpluses in the past couple of decades.

However, Peru also faces significant economic challenges moving forward. The International Monetary Fund (IMF) has forecast that the economy will contract by 4.5 percent in 2020, down from a January 2020 prediction of 3.25 percent growth. More recent predictions by the World Bank suggest a far steeper contraction of 12 percent, which could more significantly erode Peru’s savings.

The government considers the energy sector, including oil production and transportation, an essential service and has allowed it to continue operations despite the country’s stringent lockdown measures. However, some oil companies have stopped production because of the low oil price. Lower international demand due to the lockdown has resulted in the full use of the country´s oil storage capacity.

On 1 May the oil regulator, Perupetro, announced that the Northern Pipeline, which brings oil from northern Amazon sites to the ports and refineries in the coast, had halted operations. Perupetro has called on the Ministry of Energy and Mines to focus on continuing with oil extraction, so that production does not fall below a minimum and the sector can continue to generate jobs (the sector provides an estimate of 8,500 direct and indirect jobs) and contribute to regional economies with royalty payments transferred to subnational governments in producing regions. However, the Ministry has not approved any measures to date. It has, however, granted the energy regulator, Osinergmin, the legal authority to legislate on this matter.

Through the private hydrocarbon companies’ association, the Sociedad Peruana de Hidrocarburos, oil companies have proposed policies such as suspending royalty payments for 90 days, suspending tax payments until July 2020, and cutting royalty rates by 50 percent. The government had not responded to these proposals at the time of writing. Although the national impact of these measures would not be significant, since the oil sector is relatively small, royalties transferred to subnational governments in producing areas are a significant part of their investment budgets. This could have an impact on their capacity to spend on public investment projects in the second half of 2020.

The main impact of the coronavirus pandemic on mining has been in terms of the deceleration of production, particularly copper extraction. Copper exports in 2019 constituted 50 percent of total mining exports, while gold represented 30 percent.

As with oil and gas, the government considers mining an essential sector and has allowed it to continue operations despite the lockdown. However, most mines have either suspended their operations or restricted work to core activities with limited staff. One exception is Yanacocha (a gold-producing mine owned by Newmont and the Peruvian company, Buenaventura), which has said it will continue with its operations. This is likely to be due to the demand for gold and rise in gold prices.

Many companies have announced an increase in health safety measures for workers and the government has issued specific guidelines on the matter. Civil society continues to express concerns about the health safeguards approved by the government and some mines have faced internal protests by workers concerned about their health and the increased incidence of COVID-19 cases in mining camps. A report from an independent media outlet forced the large-scale mining company, Antamina, to confirm that over 200 workers tested positive for coronavirus, accounting for approximately a third of infections in the Ancash region. By 21 May, 718 mine workers had tested positive for the disease and public concern was growing about the potential for mining camps to spread the disease in rural areas.

The pandemic has also affected new projects. An example is Anglo American suspending large projects like Quellaveco, which was in the construction phase when the pandemic reached Peru. Some 70 percent of upcoming projects are copper mines. Despite copper losing some value, it is showing signs of recovery. We expect demand to rebound, directly related to China’s recovery.

As in several other mining countries, there are reports that Peru’s mining sector is facing shortages of inputs needed to continue or resume mining. In the media and amongst experts, there is debate about whether the government will introduce policies to allow mining to get back on track, such as prioritizing the sectors that supply inputs and services to the mining sector.

The country is dependent on the mining sector, which represents around 60 percent of exports and 11 percent of tax revenues. Experts estimate that overall production in the mining sector could fall by 20 percent in 2020. Along with the decline in copper prices in the early part of the year, we expect revenues from mining to drop. However, the extent of the reduction is not yet clear given the many variables which will affect the sector (including changes in prices and production costs, as well as energy costs).

Oil and gas production have decreased, which has an immediate impact as royalties are paid monthly. Data from Perupetro (the oil regulator) shows that hydrocarbon royalties in Peru have dropped from $60 million in January and $50 million in February to $26 million in March. While oil is not a major contributor to Peru’s revenues, this reduction adds to its fiscal problems. It also has an impact on the budgets of the oil and gas producing regions that benefit from the royalties paid by companies.

The implications for revenue sharing mechanisms differ between the mining and the hydrocarbon sectors. Mining revenue transfers to subnational governments in producing regions (called “mining canon”) are made up of 50 percent of income tax payments from the previous year. Therefore, the 2020 transfers correspond to the 2019 fiscal year and will not reflect the fall in prices and production yet. Royalty payments make up most of the oil and gas canon, which is calculated and transferred on a monthly basis. Therefore, the producing regions are already feeling the effects. Transfer to regions has been reduced by half compared to before the coronavirus outbreak.

Overall, although Peru is significantly dependent on its mining sector, several features of the sector and the wider economy mean that the country’s economy is somewhat resilient. Peru exports a range of minerals in addition to copper and gold, including silver, zinc, molybdenum and lead. This limits the impact of commodity price volatility to some extent. The country is not dependent on its oil, as noted above. Also, in the past decade, the country has developed other economic sectors, such as agricultural products, non-traditional fish products and textiles. Dependence issues are more significant at subnational levels, especially in producing regions.

On 23 April the country’s executive requested powers from the congress to enact laws related to tax and financial issues. The announcement was general and did not refer to specific policies or sectors. If there are any changes to the general tax laws that apply to all companies, or specifically to the extractive sector, they would not apply to companies with stability clauses in their contracts. Experts are already discussing how measures could include companies with such contracts.

Peru remains an active member of the Extractive Industries Transparency Initiative (EITI), a global good governance standard for oil, gas, and minerals. Earlier in the year, EITI granted the country an extension to present its seventh EITI report in June 2020 and we expect this deadline may be extended further.

On 10 May the executive passed a decree (DL 1500) related to public and private investment projects and the measures needed to begin operations in the context of the coronavirus pandemic. The decree adapts several existing regulatory procedures to the emergency context, including measures related to citizen participation and environmental permits and sanctions. These measures apply to all investment projects. Some civil society organizations (CSOs) have expressed concerns that the measures imply a reduction of social and environmental standards. The measures currently appear to be limited to the lockdown period and any subsequent declaration of an emergency by the Ministry of Health. However, more analysis of the measures and their implication is needed. In addition to the measures under the decree, CSOs have expressed concern that government agencies may lack capacity to monitor environmental compliance in the extractive sector during lockdowns.

As stated above, Peru’s main export is copper, which is one of the strategic minerals in relation to the global energy transition. However, copper demand for energy transition technology is still limited and these new markets are not expected to lead to dramatic changes to copper demand in the short term. Peru’s only confirmed reserve of lithium, another strategically important mineral for energy transition, is in the Puno department, but problems at the initial exploration phase will likely stall extraction.

In light of the executive decree DL 1500, referenced above, it will be important to monitor and assess the actions taken under the auspices of this decree. The risk is that temporary measures could become permanent.