Tanzania: Initial Assessment of the Impact of the Coronavirus Pandemic on the Extractive Sector and Resource Governance 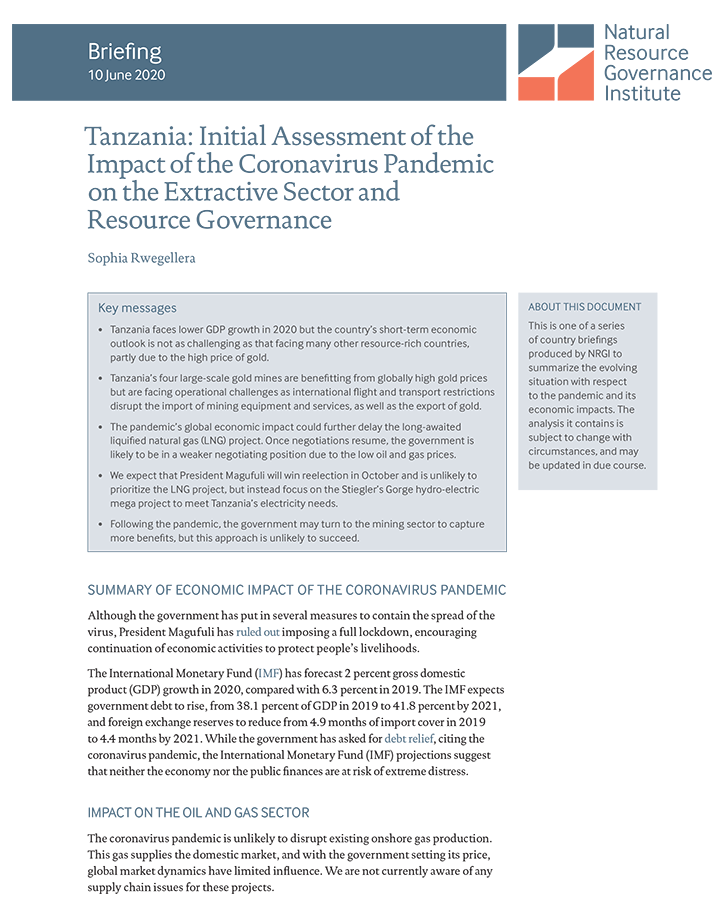 Although the government has put in several measures to contain the spread of the virus, President Magufuli has ruled out imposing a full lockdown, encouraging continuation of economic activities to protect people’s livelihoods.

The International Monetary Fund (IMF) has forecast 2 percent gross domestic product (GDP) growth in 2020, compared with 6.3 percent in 2019. The IMF expects government debt to rise, from 38.1 percent of GDP in 2019 to 41.8 percent by 2021, and foreign exchange reserves to reduce from 4.9 months of import cover in 2019 to 4.4 months by 2021. While the government has asked for debt relief, citing the coronavirus pandemic, the International Monetary Fund (IMF) projections suggest that neither the economy nor the public finances are at risk of extreme distress.

The coronavirus pandemic is unlikely to disrupt existing onshore gas production. This gas supplies the domestic market, and with the government setting its price, global market dynamics have limited influence. We are not currently aware of any supply chain issues for these projects.

The pandemic’s global economic impact could have significant repercussions on the prospects of new projects. An ongoing review of production sharing agreements (PSAs) had already stalled negotiations for the long-awaited liquified natural gas (LNG) project. They will stall further as government diverts capacity to the coronavirus pandemic response. Once negotiations resume, the government is likely to be in a weaker negotiating position. With production not expected to start until the late 2020s at the earliest, the viability of the project will be determined by long-term evolutions in the global gas market. It is too early to tell how the current price crash will impact the pace of the energy transition or the supply and demand for gas. However, it will mean that companies have less money to invest in new projects. Previous analysis had already raised questions about the project’s profitability. The crash is likely to make investment even more uncertain. Whether this changes the government’s approach in the negotiations, which NRGI considers over-ambitious, remains to be seen.

The prospects for exploration and investment in other parts of Tanzanian waters have not been good for several years. There are currently only 10 active PSAs, down from 17 in 2015. There are several reasons for this, including depressed global LNG prices, concerns about the investment climate, a model PSA with significantly higher taxes than elsewhere in the region, and slow progress with the LNG project. The price crash is likely to reduce interest further. Tanzania was planning to hold a licensing round in 2020, but we expect this to be cancelled.

Tanzania’s four large-scale gold mines are benefiting from the high gold price. However, they are facing some operational challenges. International airlines’ flights suspension means that Tanzania needs charter flights to export the bullion. The pandemic has also disrupted input imports, particularly those with supply chains involving China, South Africa and the US. But there is no suggestion that any large-scale gold mine is experiencing financial difficulties. On the contrary, given that the recent Barrick deal allows for the resumption of concentrate exports, production should increase at two of these mines.

The only other large-scale mine operating prior to the coronavirus pandemic, a diamond mine, has been put on “care and maintenance” due to the fall in the diamond price, which exacerbated existing cash flow issues.

Although the mineral trading centers that were established in 2019 for artisanal and small-scale miners remain open, these miners have been hit hard as the dealers do not have access to export  markets and international buyers due to global travel restrictions and Tanzania’s suspension of international flights. The miners have appealed to government to buy their minerals (mostly gold). The government has ruled out having the Central Bank buy unrefined gold but is looking into alternative measures such as asking commercial banks to accept the gold from miners as collateral for loans.

The coronavirus pandemic does not appear to be severely impacting the project pipeline, such as the Buckreef gold project and the Mahenge Liandu graphite project. However, concerns about the investment climate and a fall in exploration since the government enacted reforms in 2017 mean that there is still reason to doubt whether new mines will be developed in the medium term.

Mining contributed 3 percent to government revenue based on the last data available through the Extractive Industries Transparency Initiative (EITI) (2015/16). As much of this revenue comes from large-scale gold mines, we do not expect mining’s contribution to public finances to fall significantly because of the coronavirus pandemic in the near term. The higher gold price and the resumption of concentrate exports with the signing of the Barrick agreement in January 2020 mean government revenue could increase. This will be particularly important for Tanzania’s balance of payment and foreign exchange reserves including gold , given minerals comprised 41 percent of merchandise exports in 2018/19 and tourism—another large forex earner—will be severely impacted by the coronavirus pandemic.

The mineral trading centers have helped almost double artisanal and small-scale mining (ASM) revenues, but they remain relatively small. However, disruption to ASM activity puts a significant number of livelihoods at risk. A recent study of four Tanzanian regions that have significant ASM activity suggests that ASM directly employs at least 75,000 people and possibly considerably more.

Existing gas projects do not generate significant government revenue (in 2016, only 0.3 percent). The LNG project would generate a lot more. NRGI’s latest estimates suggest it could contribute around 5 percent of government revenues at an LNG price of $8/mmbtu. But these revenues are a long way off, regardless of the coronavirus pandemic. The government appears to have recognized this and is yet to start making public finance decisions in expectation of them.

At the time of writing, there has been no specific impact of the coronavirus pandemic on the natural resource governance agenda in Tanzania. The context remains one where governance of the extractive sector is highly centralized and the there is limited space for civil society to engage officials and inform or influence decisions.

It is uncertain how government attempts to boost the economy post-pandemic will impact its approach to the mining sector. The government could realize the need to expand mining activity and revisit some of the more problematic 2017 reforms. However, it could also double-down on its attempts to capture more benefits from existing mines. This approach is unlikely to succeed, particularly given that is has only just reached a deal with Barrick, which operates three of Tanzania’s four large-scale gold mines. But the government may still pursue it, particularly if they see political advantages in doing so.

The LNG project has not been a top priority for President Magufuli during his first five-year term in office. We expect that Magufuli will win the presidential elections that are currently scheduled for October 2020. Given that the second term will be his final term in office, and considering the current uncertainties surrounding the development of the LNG project, it is unlikely that the president will prioritize the development of the LNG project to drive his industrialization agenda. The administration will most likely prioritize the completion of the 2115 MW Rufiji Hydro Power Project (also known as the Julius Nyerere Hydropower Station), to meet the country’s growing energy needs.

Sophia Rwegellera is an Africa senior officer at the Natural Resource Governance Institute, and is based in Tanzania.

Tanzania: Updated Assessment of the Impact of the Coronavirus Pandemic on the Extractive Sector and Resource Governance