Transfer Pricing in the Extractive Sector in Sierra Leone 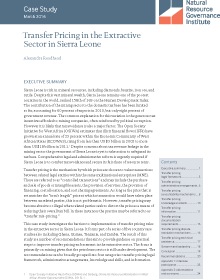 Sierra Leone is rich in mineral resources, including diamonds, bauxite, iron ore, and rutile. Despite this vast mineral wealth, Sierra Leone remains one of the poorest countries in the world, ranked 158th of 169 on the Human Development Index. The contribution of the mining sector to the domestic tax base has been limited so far, accounting for 60 percent of exports in 2010, but only eight percent of government revenue. The common explanation for this variation is the generous tax incentives afforded to mining companies, often reinforced by political corruption. However it is likely that tax avoidance is also a major factor. The Open Society Initiative for West Africa (OSIWA) estimates that illicit financial flows (IFFs) have grown at an annual rate of 23 percent within the Economic Community of West African States (ECOWAS), rising from less than US $3 billion in 2002 to more than US $18 billion in 2011. Despite concerns about tax revenue leakage in the mining sector the government of Sierra Leone is yet to take action to safeguard its tax base.

Comprehensive legal and administrative reform is urgently required if Sierra Leone is to combat tax avoidance and secure its fair share of resource rents. Transfer pricing is the mechanism by which prices are chosen to value transactions between related legal entities within the same multinational enterprises (MNE). These are referred to as “controlled transactions” and may include the purchase and sale of goods or intangible assets, the provision of services, the provision of financing, cost allocation, and cost sharing agreements. As long as the price that is set matches the “arm’s length” price at which a transaction would have taken place between unrelated parties, this is not problematic. However, transfer pricing may become abusive or illegal when related parties seek to distort the price as a means of reducing their overall tax bill. In these instances the practice may be referred to as “transfer mis-pricing.”

This case study investigates the barriers to implementation of transfer pricing rules in the extractive sector in Sierra Leone. 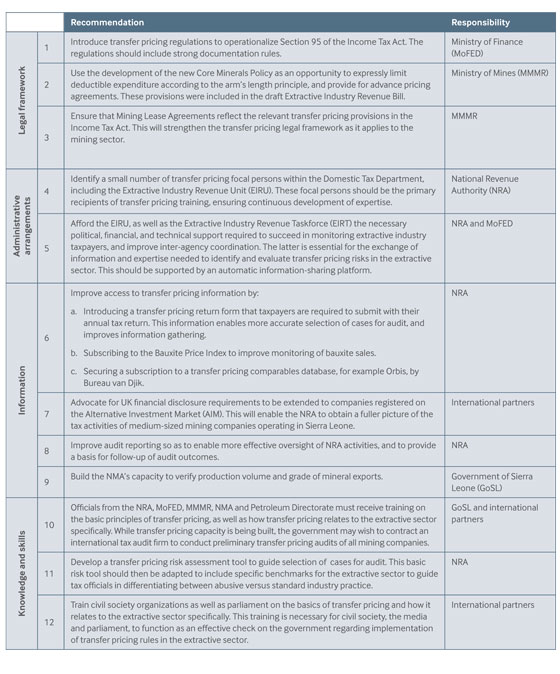 'Preventing Tax Base Erosion In Africa' Paper Launch at Oxford