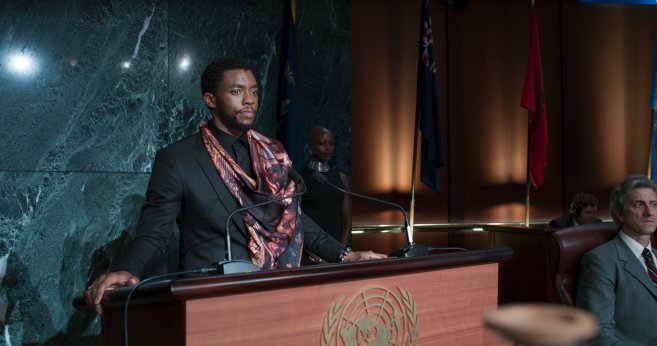 Can’t get enough of extractives sector governance and Black Panther? Neither can we! What’s been particularly striking about the hugely successful box office hit is how it has sparked a number of serious policy discussions, running the gamut from foreign policy to feminism to flipping Africa’s relationship with foreign aid on its head.

The film is meant to appeal to everyone, at every level and for many reasons. But at its heart is a surprisingly multifaceted (for what is, in essence, a superhero movie) exploration of the concept and meaning of Africa and pan-Africanism. The depiction of Wakanda, a technologically advanced African country that has never been colonized and has successfully used its mineral resources to develop, raises questions of what Africa has been, might have been, is, and still could be.

Analysts have already pointed to the natural resource governance lessons to be learned from Wakanda, with some drawing a direct contrast between Wakanda’s successful management of its vibranium (a virtually indestructible mineral used in Wakanda’s technology and weaponry) and the apparently less rosy prospects for cobalt in the Democratic Republic of Congo (DRC). Wakanda’s upstream, midstream and downstream mineral sector are entirely controlled by Wakanda itself and the country has reaped the benefits in splendid isolation. To protect the secret of its powerful metal, Wakanda has hidden from the world, and Wakanda’s own human resources and economy have apparently sufficed to support the entire mineral value chain without the need for the knowledge sharing or economies of scale that collaboration with its neighbors might provide.

But in reality much of Africa’s mining sector is currently dominated by foreign direct investment; its raw minerals are often exported with limited local participation in the sector (in terms of employment or provision of goods and services); and tax revenues are eroded through transfer pricing in cross-border transactions (and that isn’t counting revenue leakages through corruption or mismanagement).

The idea that Africa’s mineral resources should benefit Africa and drive economic development and diversification is hardly controversial, nor is the idea that heretofore they often have not. To help address this failure, since 2009, the Africa Mining Vision flagged upstream and downstream value addition, and regional coordination, as key to harnessing Africa’s mineral wealth to drive industrialization. And in recent years, several African countries have introduced local content provisions of varying levels of specificity in their mining laws, requiring companies to hire locals or use local goods and services, in efforts to boost in-country benefits from mining.

Botswana, in particular, has taken concrete steps to increase local value addition by securing the transfer of De Beers’ global sorting and valuation operations from London to Gaborone; inviting cutting and polishing companies to establish factories in Botswana and train local employees; and by setting up a Diamond Academy to provide a range of technical training courses on the diamond industry.

More recently, countries such as Tanzania and DRC have undertaken what some deem to be radical steps to overhaul their mining laws and increase local participation through such requirements as local ownership in mining companies and, in Tanzania, a yet-to-be-fully-clarified prohibition on exports of raw minerals. While the merits of the end—increasing local benefits from Africa’s minerals—cannot be questioned, the wisdom of some of the means might.

Wakanda succeeded in “going it alone,” but for African countries to fully realize local benefits will take the kind of strategic and concerted action the Africa Mining Vision envisaged.

Strategic. Local content laws and policies are an important start, but they can prove ineffectual or counter-productive if not well-aligned with a broader national development agenda or based on a realistic assessment of both the timeframes necessary for building capacity and the prospects for sustaining long-term demand sufficient to support specialized goods and services industries. Further, local content strategies should be aimed at spurring diversification by prioritizing development of skills transferable to other key sectors, rather than doubling down on resource dependence.

Concerted. Questions on the economies of scale, specialized skills development, long-term demand or infrastructural requirements necessary to achieve localization goals may best be answered by regional coordination. Localizing the mineral sector at the national level may not be viable in all cases (due to factors like market size), but by expanding the scope from national to regional, African ownership of and participation in the full mineral sector value chain becomes attainable.

Some Wakandans questioned the country’s isolationist approach not because it was an impediment to Wakanda’s own economic development but out of a sense of responsibility to use its knowledge and resources to help other impoverished and oppressed people of African descent globally. But in real life, maximizing benefits to Africa from Africa’s minerals will take a coordinated regional approach. It will take something better than Wakanda’s way.

Nicola Woodroffe is a legal analyst with the Natural Resource Governance Institute.