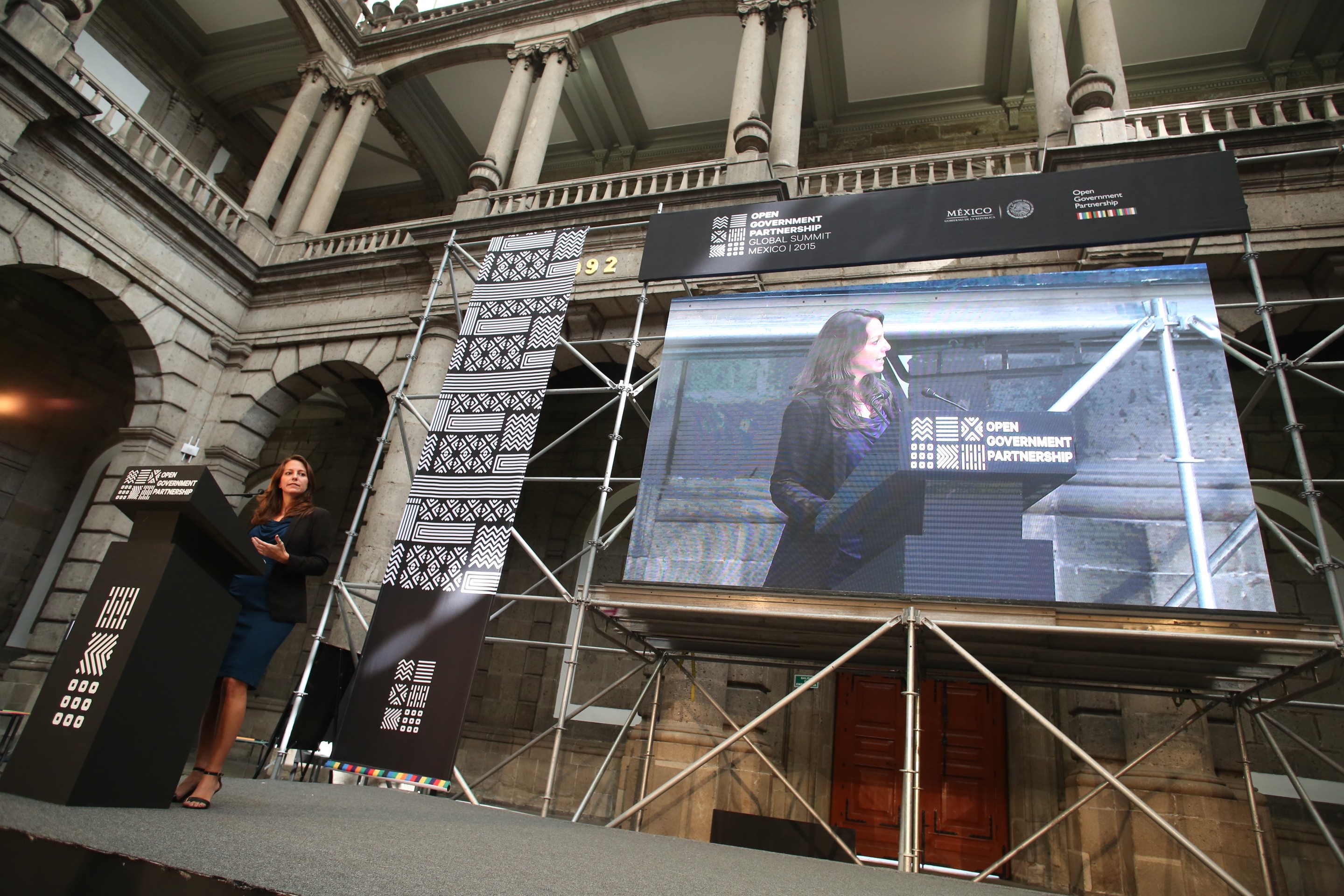 What follows are NRGI Chief Operating Officer Suneeta Kaimal's opening remarks to the Open Government Partnership Global Summit in Mexico City in October 2015. This was Kaimal's final summit as civil society co-chair. For a full slate of NRGI's activities at #OGP15, click here.

It is my great hope that we will reach a day when the Open Government Partnership will not be needed. I wish for that day to come soon. Not because I have given up on the power of our work as governments and civil society together. To the contrary. Because I believe that open government should become a matter of course – the everyday means of empowering people.

Stepping down as co-chair is really bittersweet. I am proud of all that we have accomplished. But increasingly, I realize how much more is to be done if we are to achieve real open government. At the last OGP Global Summit, Lord Francis Maude called upon countries to take the first few steps toward openness with his catchphrase: “Transparency is an idea whose time has come.” OGP countries responded. Access to information is now the most common of the OGP values. Over 500 commitments expressly focus on open budgets and open data. Once implemented, they will help citizens understand what public resources exist and how they are being managed.

But since that time, we have been largely content with OGP’s performance on these first steps in opening government – making information available. Transparency is, of course, necessary for openness – but it is not the full realization of it. True open government is about empowering people so they have voice in and agency over their lives. It requires complementing transparency with participatory processes and co-creation, strong whistleblower protections and firm accountability mechanisms. It requires deep and sustained political will.

Open government is not easy. For governments, being truly open does not automatically confer civil society praise. In the short-term, there may be internal and external resistance. But through consistent dialogue, listening and responding, governments build trust. They better understand the wants and needs of citizens. They benefit from civil society expertise to address pressing policy challenges.

For civil society, we face real challenges with representation that are difficult to resolve. We need to be vigilant about reaching out to a broader swath of citizens and civil society. We need to do the hard work of making sense of what information is available, to conduct honest analysis and ask tough questions. In doing so, we will contribute to addressing citizen priorities and augmenting citizen voice.

So, now we face the hard part. Inequality and distrust of government is on the rise globally. Across Latin America, there are mass protests against corruption. I ask all of you – do we have the collective courage to push for deeper change and to challenge the power structures that will resist? Courage to go beyond transparency to accountability. Courage to dismiss cursory consultation in favor of meaningful participation.

We do have evidence that rising to the challenge is possible. In El Salvador, the Ministry of Public Works was notorious for corruption. The country was rife with poorly constructed or unfinished projects and subject to countless lawsuits. But government, working hand in hand with civil society, introduced “integrity pacts”—monitoring mechanisms intended to prevent corruption. The agreements publicly committed officials and companies to reject bribery, collusion and other corrupt practices. They enabled NGOs to monitor bidding and construction. There were, of course, numerous obstacles in the way, including low capacity and resistance from other government officials. But they persevered. As of August, the ministry has signed 31 integrity pacts worth a combined $62 million. This initiative has provided the foundation for increased dialogue between government, civil society, and the private sector—and is a critical demonstration of accountable government.

Yesterday at the OGP Civil Society Day, civil society steering committee members awarded Georgia the first-ever government champions prize, celebrating excellence in co-creation. Georgia has leveraged OGP to meet the demands of the people to reinvent government, to combat corruption and to boost the economy. The first action plan focused primarily on access to information, as we know, a critical step. The second plan now opens up a whole host of new issues – from recruitment of civil servants and crime mapping to participation at the local government level. The government has diversified the ministries involved, with strong leadership from the minister of justice. The national OGP forum is a space of continuous dialogue between government and civil society. And they have just launched a new open parliament plan. Through meaningful participation, Georgia is concretely meeting the demands of citizens and fulfilling their open government ambitions.

The power of OGP lies in our ability to draw collective courage from such stories to address problems of collective action. We can nest a culture of openness in a core set of countries that, even if diverse in their approaches, share a common set of beliefs in the transformative power of open government. But we have real work to get there.

To ensure OGP commitments deliver real change, we must have the collective courage to reach out to our peers and broaden the base of government and civil society reformers engaged domestically. To use positive peer pressure to replicate transformative commitments. To leverage our new strategic partnerships with the global goals and open cities, and future opportunities around open data and anticorruption.

To enable participation, we must have the collective courage for governments and civil society to not remain silent in the face of repressive behavior. My most sincere thanks to [U.N.] Ambassador [Samantha] Power for highlighting this critical issue in her remarks today. NRGI’s advisory council member Ilgar Mammadov, who has been unlawfully detained and brutalized in prison, is only one of these cases, and they cannot go unaddressed. We must coordinate bilateral diplomacy and civil society outreach for maximum effect. We must embrace peer support, but also set limits when the legitimacy and credibility of OGP is at stake.

To move from transparency to accountability, we must have the collective courage to place dialogue and citizen priorities at the heart of our commitments. To be participants, not spectators in the open government agenda. To set ambitious goals together, recognizing that failure is not whether or not we achieve them—its whether or not we try.

What we have achieved since the last Summit is evidence of the challenges we face and the potential we can harness. If we can mine our collective courage, I believe we will find the deeper strength needed to achieve truly open government.