Two-thousand and eighteen was a tough year for liberal democracy, with populist and nationalist movements challenging established democratic orders. Nevertheless, political parties still play a crucial role in keeping democracy and democratic values alive. Although in decline, political parties are still in the center of the political arena in most democratic countries, shaping citizens’ preferences and influencing policy-making. The way in which they do so is of critical importance. 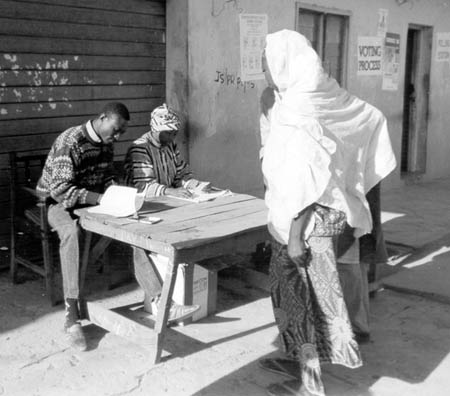 A voter and poll workers during a 1999 election in Nigeria. Photo by E. Happel of the U.S. Agency for International Development.

In April 2018, NRGI and International IDEA published the report Political Parties and Natural Resource Governance, a practical guide for developing resource policy positions. The guide builds on the positive correlation between the strength of the laws, institutions and practices intended to manage natural resources and the degree to which citizens have free and equal access to power. In resource-rich countries, parties with strong policy positions can help governments obtain good deals with international companies, support long-term policy objectives, adapt to sector volatility and manage citizens’ expectations—all of which are key to overcoming the resource curse challenge.

The guide, translated to Mongolian, Myanmar language and Spanish, has already proven relevant in several resource-rich countries. In October, it was launched in Myanmar, and in November in Lebanon and Colombia. As part of one of NRGI’s regional trainings, representatives of three major Lebanese parties (Lebanese Forces, Kataeb, and the Progressive Socialist Party Lebanese) discussed the role that political parties can play in developing strong policy positions across a broad range of political and technical topics using this guide as a starting point. The discussions that resulted from these activities showed the interest among parties to start working on these crucial issues—but they also exposed the current gap in terms of technical and policy knowledge.

Wissem Heni, NRGI’s senior officer in Tunisia, told me: “The Tunisian prime minister decided to restructure the extractive sector as a result of a corruption scandal. During the 2019 electoral campaign political parties should not miss the chance to address questions about how to prevent graft but also other salient issues for the sector, such us the future of the governance of Tunisia’s state-owned enterprises or environmental impacts related to extraction.”

In Nigeria, due to hold elections on 16 February, electoral campaigns provide an opportunity for candidates to share their priorities and plans for reform of the oil and gas sector, the country’s economic mainstay. Candidates should use this opportunity to engage citizens and explain how, for instance, they would ensure the passage of the long-awaited Petroleum Industry Bill or how they would make the sector function optimally and block revenue leakages.

Two weeks after, on 26 February, elections will take place in Senegal. Evelyne Tsague, NRGI’s Africa co-director, highlights that “recent discoveries of oil and gas in the country have raised public expectations of significant revenues and the management of these resources has been at the center of political debate. At this particular time of the presidential campaign, candidates should communicate how they plan to turn natural resource into sustainable development, and more specifically, how to avoid the mistakes of other oil and gas producers, fight corruption, and strengthen transparency, accountability as well as citizen participation.”

Indonesia will hold presidential and parliamentary elections on 17 April. Fikri Zaki Muhammadi, Asia Pacific associate at NRGI, told me “Indonesians have been following with special interest the presidential debates. The next one will take place on 17 February. The members of the Indonesia natural resource coalition, including NRGI, regret that neither of the candidates has talked much about natural resource governance reforms despite the urgency of the issue. The focus of the next debate will be on energy, food, infrastructure, natural resources and environment. We hope that the candidates will be willing to elaborate more on their plans to reform the sector.”

Developing long-term policy positions on resource governance is not easy. Parties and politicians must critically assess their priorities, and address and work around controversial questions to which they might not have answers. However, discussing and agreeing on a roadmap to walk through the challenging electoral environment is a good start. This can have positive consequences not only in the long run, helping political parties become more programmatically committed on the topic, but also in the shorter term, since citizens may be more likely to vote for candidates with a clear stance on these crucial issues affecting their daily lives.

This sort of engagement requires a clear objective and scope, and serious commitment from the highest levels of a party and from those that will be drafting their positions; proper planning; and detailed analysis of the different issue areas—hopefully with support from sector experts and informed by wide consultations. Although a time- and resource-consuming endeavor, having a resource governance policy position in place gives party members and constituents something they can reference and get behind as they develop, implement and monitor policies on natural resources, to ensure that oil, gas and minerals are managed in the long-term and best interest of their countries.

For the 1.8 billion people who live in poverty in resource-rich countries, political parties committed to informed policy positions on resource governance could make a big difference.


Margarita Batlle is a capacity development officer with the Natural Resource Governance Institute.