Last week, the government of Ghana followed through on a promise it made in July 2017 by launching a public petroleum register that contains the full texts of petroleum agreements, licenses, permits and authorizations.

It is particularly encouraging that the government opted to align the register with international best practices by incorporating full-text contracts into the platform. Whether these documents would be included has been an ongoing topic of discussion among Ghana’s EITI stakeholders because the 2016 Petroleum (Exploration and Production) Act—which mandated the creation of the register—did not clarify whether full-text contracts or just a simple list of agreements would be made public. The government’s approach has gone some way toward addressing this important transparency issue; but to provide a legal basis for the policy, Ghana’s energy ministry should write a requirement for full-text publication into the Petroleum (Exploration and Production) Regulations, which are currently in the final stages of drafting.

With a new contract with ExxonMobil being finalized, many users may question why that deal is not referenced in the register. To assuage these concerns, the government could ensure that the register include a list of all applications under consideration (and their status), in addition to listing applications that have been approved. The possibility that the government may announce a licensing round for new offshore blocks makes the need for such information all the more pressing. 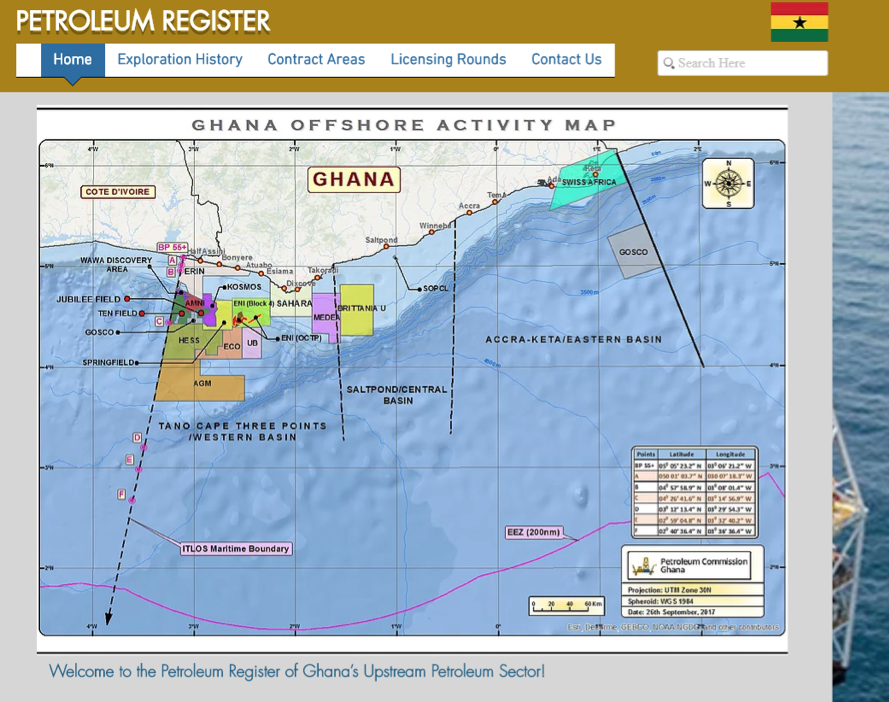 The publication of contracts is an important tool for holding public officials and company representatives accountable for the deals they make. When negotiators know that the outcome of their work will be public and subject to legal, public and commercial scrutiny, they have powerful incentives to draft more carefully. This will help companies—and most especially government negotiators—to resist high-level political interference and excessive industry pressure during negotiations and the drafting of these contracts. Such pressures are quite common in licensing and contract-award processes in resource-rich countries, and can lead to lopsided deals that are (politically) unsustainable and can result in costly disputes or renegotiations.

Contract transparency in the oil, gas and mining industries is fast emerging as a global norm. More than 1,500 contracts and other related documents are now in the public domain, according to open online contract libraries such as ResourceContracts.org and the OpenOil repository—and this number is growing. More than 40 countries have officially published contracts. And among 51 Extractive Industries Transparency Initiative (EITI) countries, 29 have disclosed at least some of their contracts.

Rob Pitman is a governance officer at the Natural Resource Governance Institute (NRGI).