Local level agreements (LLAs) are formal agreements between resource companies and local stakeholders affected by their extractive projects. They are intended to create mutually beneficial relationships by increasing positive impacts for local livelihoods and development. In Mongolia, resource companies are encouraged to use LLAs, and though the quality and uptake of these agreements is not consistent—ranging from rudimentary, transactional contracts to sophisticated, multi-stakeholder agreements—Mongolia’s experience with LLAs provides important lessons for any resource-rich country that seeks to improve agreement-making in communities.

In Mongolia, local governments are the counterparties to companies in LLAs, and so it is important that local civil society organizations (CSOs) have the capacity to both engage in the LLA process and monitor the agreements’ implementation. Thus, NRGI provided training, grants and technical support to four local CSOs to build their capacity to independently monitor LLAs (these projects were carried out in coordination with five monitoring projects funded by the Open Society Forum, OSF). Using their newly developed skills and knowledge, staff of these CSOs identified serious gaps in the LLA process: local governments were found to be reluctant to disclose their LLAs; project-affected communities and the public were not sufficiently consulted (when they were consulted at all); vague language was used in the agreements, inhibiting adequate implementation; local governments didn’t have the capacity to prepare and conduct negotiations with mining companies; and little attention was paid to setting up mechanisms or processes that could ensure effective implementation.

Not all the news was bad, though: some monitoring projects highlighted emerging good practice, such as disclosure of agreements, multi-stakeholder consultation and the use of measurable agreement terms. 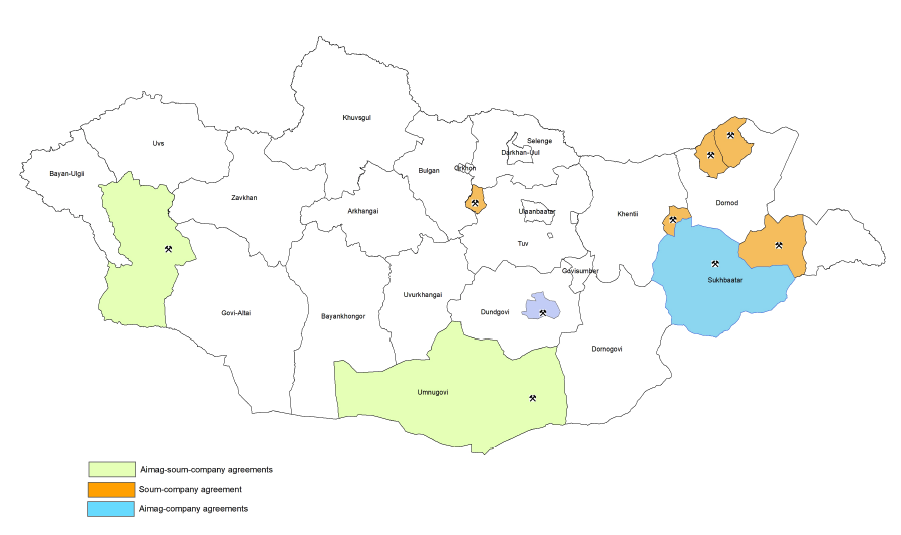 Aimags and soums i.e., provinces and districts) where LLA monitoring projects were implemented (Click on the map to enlarge)

In order to consolidate the findings of the monitoring projects, multi-stakeholder meetings and additional research on LLAs in Mongolia, NRGI (in collaboration with Tohoku University’s Byambajav Dalaibuyan) published Local Level Agreements in Mongolia’s Resource Sector: Lessons Learned and the Way Forward. The paper concluded that the government officials ought to be realistic about the plausibility of the universal uptake of LLAs under Article 42.1 of the Minerals Law and what can be achieved from the model agreement, given that the capacity and interest of local governments, companies and communities varies widely. One of the five policy responses recommended in the paper was using thresholds to prioritize the resource projects that are required to establish LLAs (e.g., projects at the mining and processing phase). This recommendation became a subject of heated debate at the multi-stakeholder meeting organized by NRGI in November 2017. Further discussion is needed to develop better regulations and policy incentives to improve the positive effects of LLAs.

Another key finding of the monitoring reports and policy paper was the need to build the capacity of local governments to use LLAs as an opportunity to sit at the negotiating table with mining companies and get them to engage them with local development issues in a transparent and effective manner. NRGI has sought to support the development of such local government capacity through a training program based on nurturing hands-on experience and knowledge-sharing. The aim has been to develop an effective country-specific training using a combination of international know-how (e.g., relying on cases from countries like Australia and Canada, which have extensive experience in local agreement-making) and local best practice and lessons learned (e.g., based on the Mongolian monitoring reports and the aforementioned research paper).

The findings of the monitoring projects and the policy paper became good sources of information and real-world examples that NRGI used in developing a training module on the process, content and implementation of LLAs in Mongolia (the module was developed jointly with Byambajav Dalaibuyan and OSF's Erdenechimeg Dashdorj). Two regional training seminars held in November 2017 involved local government representatives from 20 districts in 10 provinces. 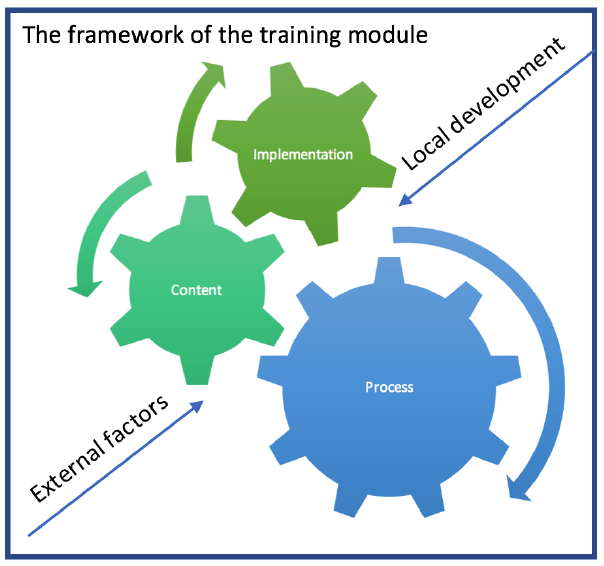 The highlight of the workshop was a fictional scenario and role-playing session used to give the participants hands-on experience and motivate them to distill key points of consideration. In each phase, learners were grouped into three groups with three separate roles: working groups acting out the roles of the provincial government, the district government and the company. After each role-playing session, the facilitators introduced insights from international and local examples and provided updates on relevant legislative frameworks. Mr. D. Ganzorig, an environmental officer in Galuut, in Bayankhongor aimag, said, “We taught [that an LLA] achieved its purpose if mining companies fulfill their monetary obligations. Through the role play, we learned about practical ways to expand benefits local communities could receive.”

An insightful panel discussion involving representatives of aimags and soums that had experience with LLAs concluded the module and allowed discussants to share their practical approaches, strategies and challenges in dealing with resource companies and establishing and enforcing LLAs. Most of the participants recommended including mining companies and local CSOs in future training seminars.