The Extractive Industries Transparency Initiative Board has an important opportunity to strengthen the EITI Standard’s provisions on contract transparency when it meets next week in Kiev.

State-investor contracts and licenses which provide the terms attached to the exploitation of oil, gas and mineral resources must have citizen oversight. They can determine taxes, subnational transfers, audit rights, infrastructure and barter arrangements, community consultation requirements and social spending—issues with far-reaching effects for a country’s economy and its people.

Six years after the standard was changed to “encourage” contract disclosure, the Publish What You Pay Coalition is now calling on the EITI Board to revise the standard to include “a requirement to publish contracts and licenses.”

Here are four reasons why the board should finish the job on contract transparency:

Contract disclosure is supported by at least 18 leading extractives industry companies and has been endorsed by private sector forums including the International Council on Mining and Metals and the B Team. Leading development finance institutions including the World Bank’s IFC and MIGA already require private sector clients developing extractive resources to publish contracts. The EBRD has the same requirements for hydrocarbons development. The IMF, the U.N., the International Bar Association and the OECD have endorsed the practice. 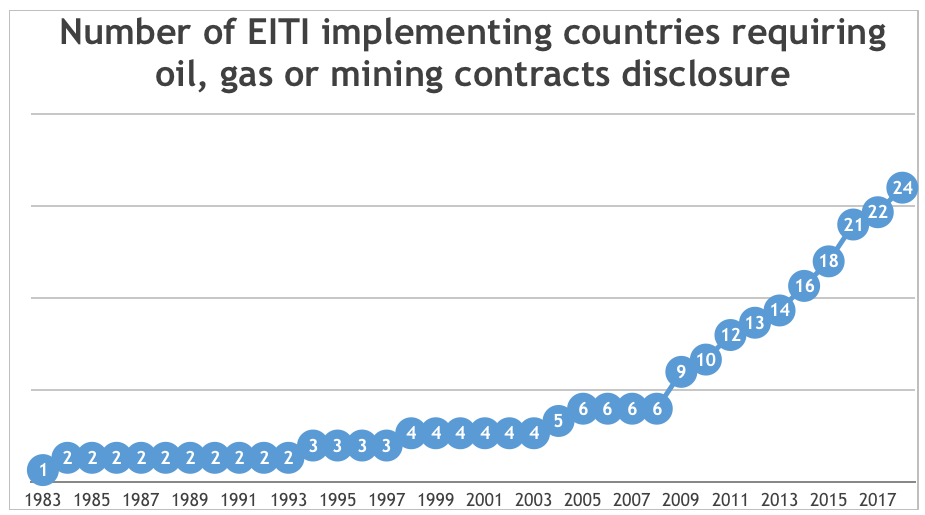 Graphic by Rob Pitman, based on the Contract Transparency Policy and Practice Tracker

3. The risk that this will be another requirement that countries will struggle to implement is low.
Compared to other kinds of extractive industry disclosures, publication of contracts is technologically simple. It is not labor intensive. There are few legal impediments to disclosure. Twenty-four implementing countries already have laws requiring disclosure. There are no obvious legal obstacles in at least 22 additional countries. While some argue confidentiality clauses within contracts prohibit publication, review of actual confidentiality clauses in publicly available contracts shows exploration and technical data are usually the targets of these clauses. Contracts are not.

It is also increasingly accepted that fears of competitive harm from contract disclosure have been exaggerated. This is demonstrated by statements from extractive industry companies. For example, Simone Niven, group executive of corporate relations at Rio Tinto, noted that confidentiality and commercial sensitivity “has not… prevented us from disclosing a vast majority of our contracts with governments as most of them do not contain commercially sensitive information.” Jean-François Lassalle, formally a senior adviser at Total, remarked that “[a]s soon as a state wishes to publish all oil contracts... it is our view that the legal and commercial issues have been addressed.”

The arguments for contract transparency are clear. Now it is time for the EITI Board to act.

Rob Pitman is a governance officer with the Natural Resource Governance Institute (NRGI). Isabel Munilla is extractive industries transparency policy lead with Oxfam America and a representative on the PWYP Global Council.